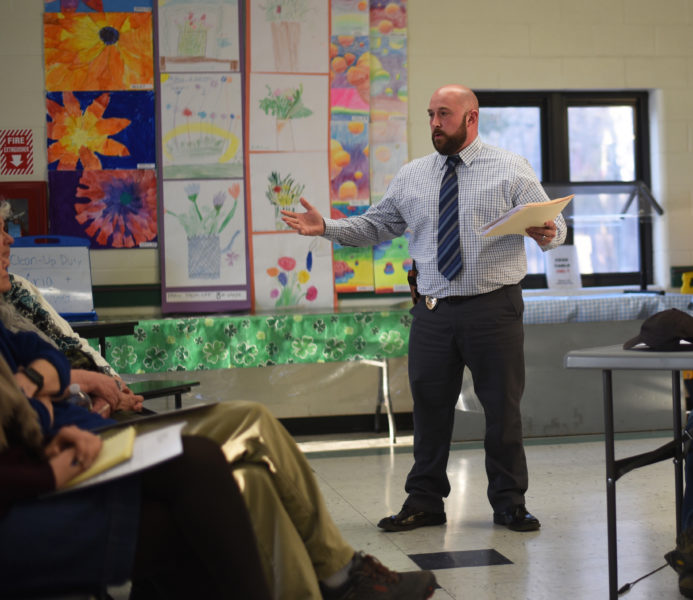 The Great Salt Bay School Committee approved the 2018-2019 budget with a 3.12 percent increase and without funds for a school resource officer Wednesday, April 11.

Significant changes include the addition of a $107,100 contingency for special education and $27,100 for security assessment services.

The addition of funds for possible security measures stemmed from a discussion about a school resource officer at Great Salt Bay Community School.

“This is the last thing I want to talk about, having a school resource officer, but we can’t ignore it anymore. We need to have the discussion,” committee member Josh Pinkham, of Damariscotta, said.

Damariscotta Police Chief Jason Warlick spoke about what hiring a school resource officer would entail and what benefits could come from it.

“I’ve spent the last two weeks in every single building I can, all around Lincoln County, to talk to (school resource officers), to talk to principals, to try and find out what are the advantages of this program,” Warlick said.

Warlick said a school resource officer would be more than an armed guard, and could serve as a positive role model for students.

The officer would work to prevent bullying and teach alcohol, drug, and domestic abuse awareness. The officer could also be present at after-school events, such as sports; handle parking lot traffic; and teach traffic safety.

“Being in the school is important … we have an opportunity, as law enforcement, to mold these children, to guide them, to be a positive role model from kindergarten all the way up,” Warlick said.

Warlick described a school resource officer as being a “risk management insurance policy.”

“I support this 100 percent, as long as you all support it,” Warlick said to the crowd.

The Damariscotta Police Department would pay for the officer’s equipment and, if necessary, to send the officer to the police academy, according to Warlick. During the summer, the school resource officer would work as a patrol officer for the police department.

“There is an importance to (a school resource officer). It is not just having a firearm and walking into school and being the police officer. It is being a role model, being a friend, and it is absolutely effective,” Warlick said.

Multiple people in attendance said that while they support school safety, hiring a school resource officer seems to be going too far.

“It sounds like a great thing, but there are a lot of positions we would love to have here,” Doug Straus, co-president of the PTO, said. Straus said he hopes the committee is not considering the position due to fear.

Dennis Anderson, of Newcastle, asked how many other elementary or middle schools in the area have school resource officers, since the position seems to be more common in high schools than K-8 schools like GSB.

Warlick said that in the short time he had to conduct research, he counted 19 middle school-specific school resource officers in Maine.

Others in attendance said the committee should consider alternative safety measures before it thinks about hiring an officer.

Committee member Angela Russ, of Damariscotta, asked Warlick why a school resource officer is necessary when Warlick already spends time at the school and has a positive impact on the students.

“I see you here every morning,” Russ said.

Warlick said he is usually at the school for about an hour a day. “What kind of positive effect can we have on a child if we have somebody in here 40 hours a week?” he said.

“I don’t know where we go from this point, other than maybe further research. We know we are going to have the security (assessment) done… We just want what’s best for our kids,” Doe said.

There was a $54,200 line item in the draft budget for a school resource officer, and the special education contingency was $80,000.

“I’m not comfortable leaving that amount of money … for something that we don’t necessarily know that we need anyway,” committee Chair Stephanie Nelson said.

The committee decided to change the name of the line from “school resource officer” to “security assessment services” so the money can be used for any safety measures needed, not specifically a school resource officer. The dollar amount was cut in half, to $27,100, and the other half was added to the special education contingency for a total of $107,100.

Despite the overall budget increase, the three towns in the Great Salt Bay Consolidated School District – Bremen, Damariscotta, and Newcastle – will pay less toward the budget next year.

Each town’s share of the K-8 student population determines its percentage of the bill after accounting for other revenue sources.

The money could be used to have a board-certified behavior analyst present at the school more often.

Easter Swartzentruber spoke in support of this option.

“This position is vital to the success of not only my children, but is also required by law,” Swartzentruber said.

“A (board-certified behavior analyst) oversees all children’s behavior, typical or not,” Swartzentruber said.

They also have the expertise, if necessary, to significantly change a child’s behavior, allowing them to be present in a non-restrictive environment and have meaningful relationships, according to Swartzentruber.

The school currently contracts a behavior analyst, however, students only see the analyst once every few months, according to Swartzentruber.

The analyst passes information to an educational technician, who often does not have experience or training in the field, and is expected to implement the behavior therapy, according to Swartzentruber.

“In order for behavior therapy to be successful and meaningful, it is not something that is done in one meeting or one day, and then left in someone else’s hands for several months … It requires direct interaction by individuals who are properly trained to obtain meaningful, positive results,” Swartzentruber said.

“Given that we do not have a (board-certified behavior analyst) in our school, or in our district, for that matter, my daughter is left to fend for herself, which leaves her more often than not alone at recess, alone at lunch, and unable at this stage to make friends and have meaningful interactions,” Swartzentruber said.

“We are very behind the eight ball on this,” Swartzentruber said.

Voters in Bremen, Damariscotta, and Newcastle will gather for the district’s annual budget meeting at GSB at 7:30 p.m., Thursday, May 10.

The committee also extended the contract of Principal Kim Schaff to June 30, 2020, and reappointed Kami Peaslee as assistant principal.