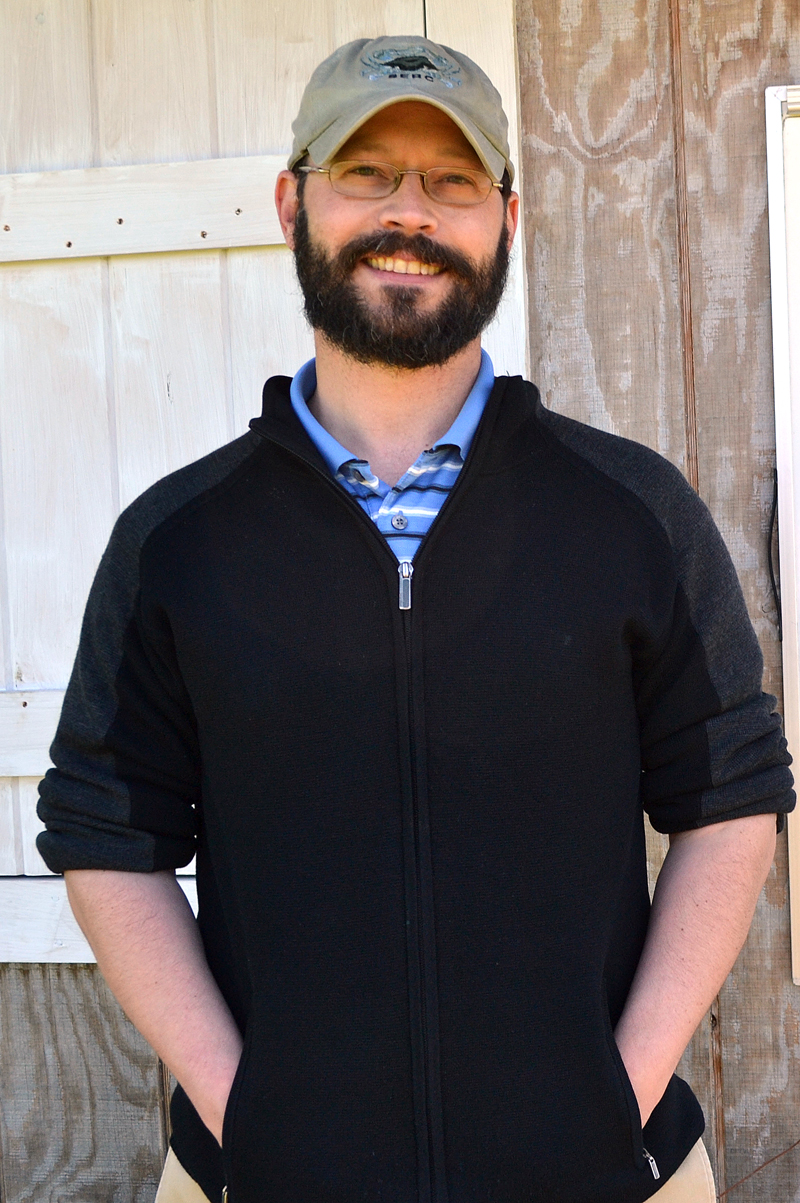 For the second time in three years, a teacher from Great Salt Bay Community School has been selected as the Lincoln County Teacher of the Year.

Fourth-grade teacher Chris Coleman, along with the teachers from Maine’s other 15 counties, was honored during a ceremony at the State House in Augusta on Friday, May 12. The 16 teachers are finalists for the Maine Teacher of the Year, a Maine Department of Education program administered by Educate Maine, a business-led education advocacy organization.

Coleman, of Whitefield, began his teaching career at the Chewonki Foundation in Wiscasset, working in the environmental education program. He later worked in the outreach program, traveling to schools and teaching hour-long programs to classes of all ages.

It was during those classroom visits that Coleman recognized his desire to be a full-time teacher in a public school, he said.

“We would go in for an hour at a time and then we would leave,” Coleman said. “We didn’t know if the kids were retaining what we said or learning from it or if they wanted to do more with it. I just started craving a better relationship with the students where I could be in the classroom more.”

Coleman went back to school and graduated from the Lynch School of Education at Boston College with a Master of Education degree. His search for the perfect teaching job, however, took some time, and he spent his first two years after graduation working as a carpenter.

After an unsuccessful interview for a fourth-grade teaching position at GSB, Coleman received a call from the school saying that while there wasn’t an open teaching position at the moment, they would love to have him come back and work as an ed tech in the Alternative Classroom for Educational Services program, which provides behavioral support as part of students’ special education learning plans.

“It really helped me get my foot in the door, and it was an immensely valuable experience,” Coleman said. “It helped me become the teacher I am today and taught me how to work with a diverse set of learners.”

When a fourth-grade teaching position opened up, Coleman transitioned into the classroom, where he has been ever since.

Coleman credits three key components for his success as a teacher, the first being establishing a relationship with each of his students.

“It’s so important to get to know your students beyond their scores and data. You need to get to know their parents and their family life, and show them that you have an interest in what’s going on beyond what they do in the classroom,” Coleman said.

Coleman holds individual conferences with students to discuss how their math, reading, and writing skills are progressing. Before each conference digs into academic topics, he asks about something the student is involved in, be it a sport or a theater production.

“The kids are going to open up and try harder if they know you’re invested in who they are as a person,” Coleman said.

Coleman also provides unique learning experiences for his students, typically with an outdoor component. His wife, Margaret Coleman, is the agriculture coordinator for GSB. One of her projects was the creation of a garden on school grounds, which Chris Coleman’s fourth-graders maintain. Each spring, the outgoing fourth-graders plant the produce that will be harvested in the fall by the following class.

The experiences beyond the four walls of the classroom help students who might not excel in academics shine, Coleman said.

“They become new people,” Coleman said. “I love seeing them beyond their schoolwork, and incorporating the outdoors is really just an added bonus.”

One of the biggest factors in Coleman’s teaching philosophy is the importance of constant enrichment.

“A teacher should be a constant learner,” Coleman said. “When I run out of the desire to get better, that’s when I’ll know it’s probably time to leave.”

His students are sometimes guinea pigs for new teaching techniques Coleman has heard about from other teachers or read about online. Last fall, Coleman volunteered to be a part of a pilot program for the Central Lincoln County School System’s math curriculum.

“I have this compulsion to be first and see what’s coming down the line,” Coleman said. “I just want to dig in, be involved, and get a better understanding of what’s new and different.”

Coleman also enjoys working with his fellow teachers at GSB. He’s been a part of the Effective Educator Evaluation System Steering Committee, which evaluates teachers’ performance within AOS 93. 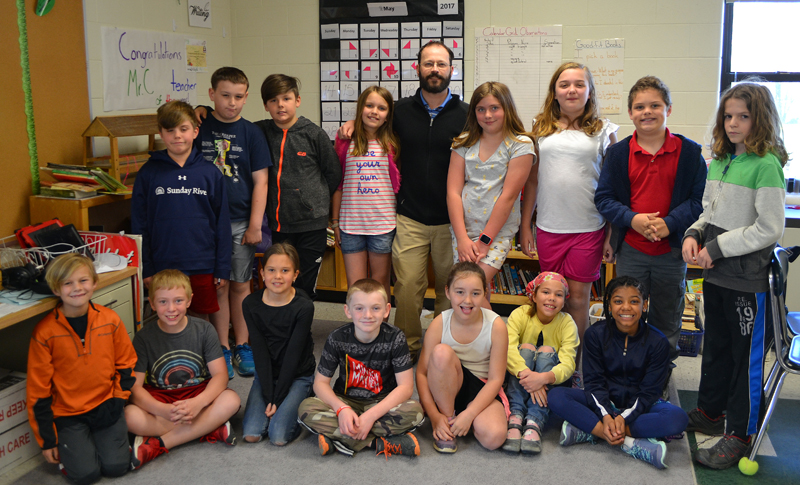 “It’s nearly impossible to evaluate teachers … it’s not a small business where things can be determined by scores and numbers, because there are endless variables in all children,” Coleman said. “They bring different experiences to the classroom, and to assign a score to a teacher based on a student’s performance on a given day doesn’t make sense. I don’t know if there will ever be a perfect system, but I want to do what I can to help out.”

The GSB administration provides a “tremendous amount of support and trust” to Coleman, allowing him to try new things with the understanding that he will meet the required objectives of teaching.

Coleman said he was honored, flattered, and humbled when GSB Principal Kim Schaff nominated him for Lincoln County Teacher of the Year. For the application, Coleman had to write three 500-word essays and submit letters of recommendation to Educate Maine.

“He teaches students, not content, knowing the strengths and needs of his individual learners to plan and guide instruction that is at the next stage of proximal development for his learners,” Bailey said in the letter of recommendation. “Chris is serious, and very intentional in his delivery of instruction and planning of lessons, however, he has a great sense of humor and makes learning fun and meaningful for his students.”

Three teachers were named finalists and interviewed by a panel, which included Dresden Elementary School teacher and 2016 Lincoln County Teacher of the Year Erica Atkinson.

During Teacher Appreciation Week, Coleman received a phone call from Dolly Sullivan, the state coordinator for the Maine Teacher of the Year program, informing him he had been selected as the 2017 Lincoln County Teacher of the Year.

Coleman took the phone call in the hallway outside his classroom. When Sullivan told him the news, Coleman opened the door to tell his students immediately while still on the phone. Hearing the students’ cheers was one of the best moments in his teaching career, he said.

“There will never be another moment like that,” Coleman said. “It was just amazing.”

Coleman will continue to participate in the Maine Teacher of the Year selection process. The next level involves a video submission demonstrating his work in the classroom and a written reflection about the video.

If Coleman is selected as one of the eight semifinalists, he will submit a professional portfolio and a make a presentation to a panel. After the field is reduced to three teachers, the Maine Teacher of the Year will be selected after a school site visit and a final interview.

The faculty and staff at GSB have been incredibly supportive since the news broke, Coleman said, however, he is quick to point out that the award is not about him, but the entire school family.

“Our school won this. It wasn’t me,” Coleman said. “There are a number of amazing, excellent teachers here, and wherever I go, I’m bringing my colleagues with me and talking about all the things we do together as a team.”