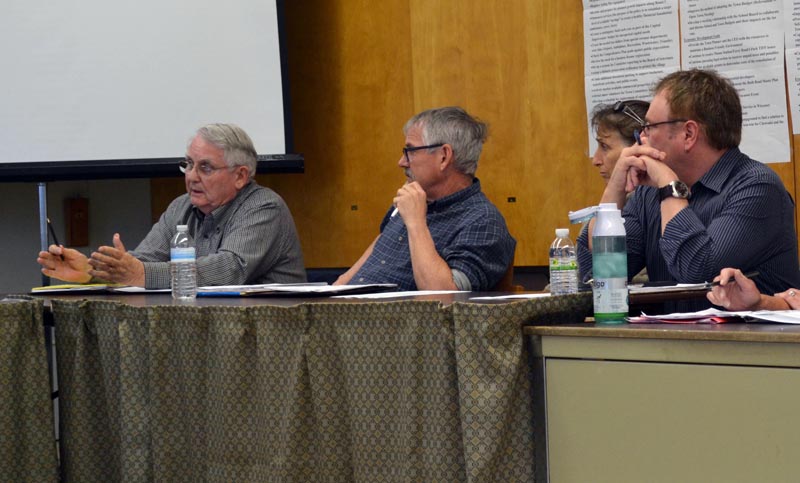 The Midcoast Conservancy is requesting public support to challenge the Maine Department of Transportation’s demolition of the Haggett Garage on Water Street in Wiscasset, which has served as the organization’s headquarters since January 2016.

In an open house at Midcoast Conservancy headquarters Wednesday, April 19, Executive Director Jody Jones urged those in attendance to reach out to the DOT, state representatives, and the Wiscasset Board of Selectmen to express support for the nonprofit’s continued presence in the building.

The goal is not to interfere with or disrupt the traffic improvement project, but to find a solution that will benefit everyone, Jones said. “We think there’s an opportunity for an even better plan, but the only way to know will be if we sit down and talk about it with the DOT,” she said.

The public advisory committee has worked with the DOT for several months to hammer out the details of the downtown traffic plan, which will be presented to the public May 8. Advisory committee members expressed anger about Midcoast Conservancy’s actions.

“Where were they?” committee member Lonnie Kennedy-Patterson said. “I volunteer for them and I’m very angry at them for not speaking up sooner. Everything has been on the table and out in the open.”

“Why are they trying to buy a building that’s been slated to be torn down?” committee member Bill Maloney said. “I would be fired if I tried to do that in business.”

Since introducing the downtown traffic project in March 2016, the DOT has stated its intention to acquire the Haggett Garage and create a parking lot at the location to compensate for parking that would be eliminated on Main Street.

The DOT acquired the property through eminent domain shortly after the Midcoast Conservancy Board of Directors voted to exercise its option to purchase the property from former owner Coastal Enterprises Inc. The DOT now owns the building.

In an April 13 letter to Midcoast Conservancy, Maine Transportation Commissioner David Bernhardt encouraged Jones to contact DOT Chief Property Officer Scott Avore to talk about relocation. “Our goal is for Midcoast Conservancy to re-establish its operations in a new location as smoothly as possible on a timeline that works for all concerned,” Bernhardt said.

In the letter, Bernhardt encouraged Jones and Midcoast Conservancy representatives to participate in the advisory committee process.

The Midcoast Conservancy did not previously reach out to the advisory committee because the organization only recently decided to move forward with purchasing the Haggett Garage, Jones said.

“We were looking at other properties and evaluating our options,” Jones said. “In hindsight, I wish we did approach the advisory committee.” The organization did contact the DOT directly in February, but was told the DOT could only speak with the building’s owners, she said.

Jones was not aware of the advisory committee meeting Monday, but does plan to participate in the future, she said. As the advisory committee continues to look at options for the downtown project, Jones said she is hopeful there will still be the possibility to discuss alternatives to demolishing the Haggett Garage for parking. 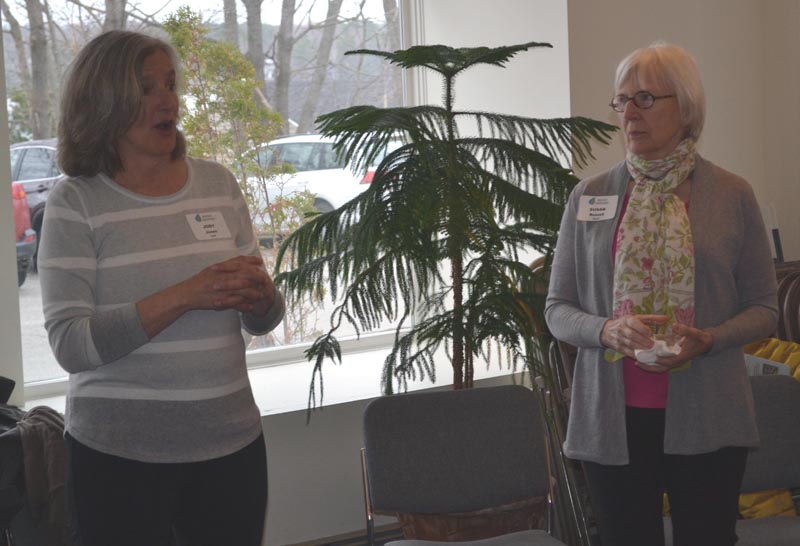 Jones pointed to a blue house next to Haggett Garage, which is in disrepair. The owners have expressed interest in selling the property, Jones said, and the location would allow access to the back of businesses on Main Street.

The DOT did not consider the blue house because it is listed on the National Register of Historic Places, according to DOT Project Manager Ernie Martin, who has worked with the public advisory committee on the project design. The location would also require grading that would disrupt neighboring businesses, he said.

While the Haggett Garage is not listed as a historically significant structure, the DOT intends to salvage items from the building that may be of historical importance, such as the Haggett Garage sign on the front of the building, Martin said. The DOT would be willing to create a kiosk honoring the site, and may even consider naming the parking lot “Haggett parking,” he said.

Members of the audience groaned when Martin suggested naming the parking lot after the Haggett Garage at the advisory committee meeting. Several staunch opponents of the downtown traffic project have pointed to the DOT’s use of eminent domain to further their criticism of the department and the project.

The Midcoast Conservancy’s concern is limited to the Haggett Garage, Jones said.

“I strongly believe that having an open dialogue with an open heart and open mind can create a better path forward,” Jones said. An attorney is reviewing information the DOT sent to the Midcoast Conservancy after acquiring the Haggett Garage, she said.

The two organizations have not yet met to discuss relocation, which is a conversation Midcoast Conservancy hopes to have in parallel to conversations about parking alternatives. “If there really is no alternative that will benefit the town, we will leave,” Jones said.

With the blue house next door to the Haggett Garage about to fall down, Jones questioned if it should be given further consideration. Its placement on the National Register of Historic Places may create “a barrier,” Jones said, “but is it really insurmountable?”