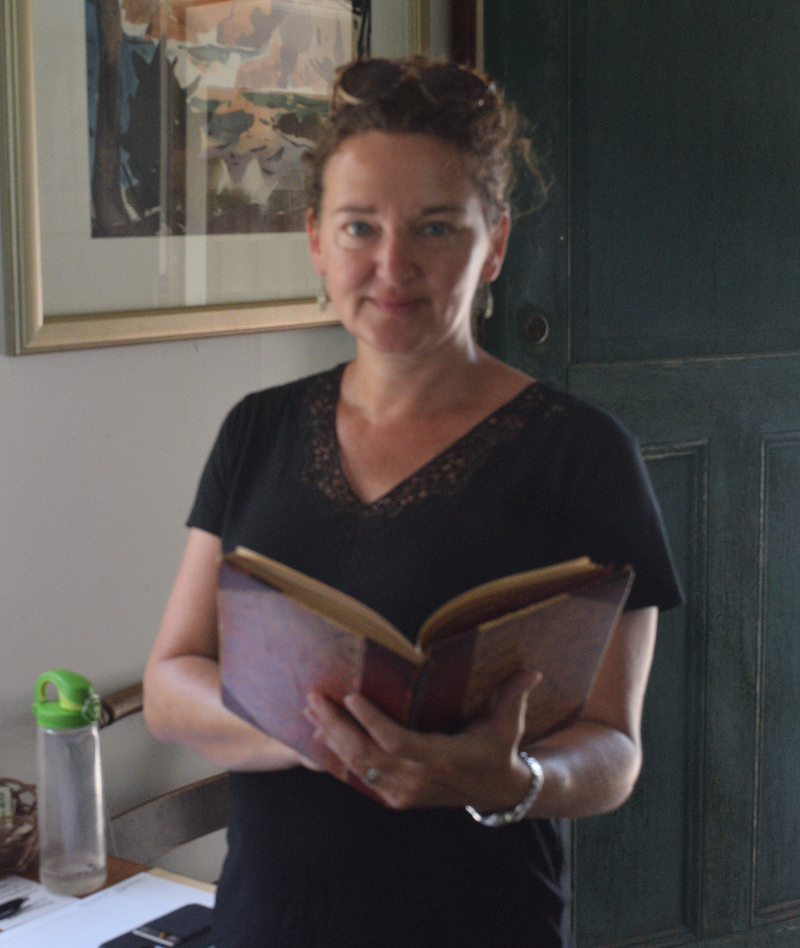 Jennifer Jenn Pye, director and chief curator of the Monhegan Museum of Art & History, stands with a homemade anthology book containing eight articles and short stories about Monhegan Island on Saturday, July 23. The book, compiled by Arthur Pierce, matches another similarly bound book by Pierce containing family photos that the museum already had in its possession. (Evan Houk photo)

A handmade anthology of articles about Monhegan Island made its way back to the plantation 113 years after first being compiled on Saturday, July 23.

“This is wonderful,” Jennifer “Jenn” Pye, director and chief curator of the Monhegan Museum of Art & History said upon receiving the book. “It’s so exciting when things like this find their way back to Monhegan.”

The book appears to have been compiled by Arthur Pierce in 1909, judging from the inscription written in pencil that says “A.W. Pierce Monhegan 1909” on the first blank page.

It appears that Pierce, a summer resident of Monhegan Island, took out eight different clips of articles or short stories pertaining to the island from that time period and collected them in a colorful and sturdy binding.

Many of the clippings Pye has never seen before, she said.

This is the second homemade book of Pierce’s that the museum now has in its possession. The other book is filled with family photographs and is a “pair” that was bound by Pierce in a similar way, Pye said.

“It’s nice to know the summer population tried to preserve the history before there was a museum,” Pye said.

The book was originally found by Chauncey Erskine, owner of Maine Booch Brewing in Damariscotta, at a thrift sale at the Union Congregational Church in South Bristol. Erskine frequently shops around for vintage items like paintings, books, magazines, and drinking glasses to feature and offer for sale at the hard kombucha tasting room.

He said he was originally drawn to the cover when he saw the book in a $2 “bag of stuff” at the shop. The outside and inside covers feature an intricate multi-colored design that looks similar to paintbrush strokes or splotches on a deep red-orange background.

Erskine felt called to contact the Monhegan Museum to return the book to its original home.

“They’re not my stories,” Erskine said on Sunday, July 24. “They belong on Monhegan.”

Eventually, Pierce’s anthology will be accessioned, meaning it will be cataloged into a database that is searchable by keyword, and scanned into the museum’s archives for access, Pye said.

“So if anybody’s researching (keywords), this will be a place to find information about the house called the Influence or that there is an image of Reuben Davis,” Pye said.

There is not a searchable online database, but Pye said that the museum is very accommodating to researchers and can usually send a PDF of research material if it is requested.

The house known as the Influence, which is in the center of town across from the Monhegan Store, is referred to in an October 1908 article in The Decaturian as “Prof. Varnum’s Picturesque Island Home.”

The article is titled as such and is some kind of amalgamation between legitimate facts and fanciful tales like a search for Captain Kidd’s treasure on the island.

“I don’t believe it’s true but it’s one of the things, because it’s in print, occasionally comes back and people will say, ‘well what about this Captain Kidd story?’” Pye said.

Pye said Varnum was also a summer resident who would have known the Pierces well at the time. 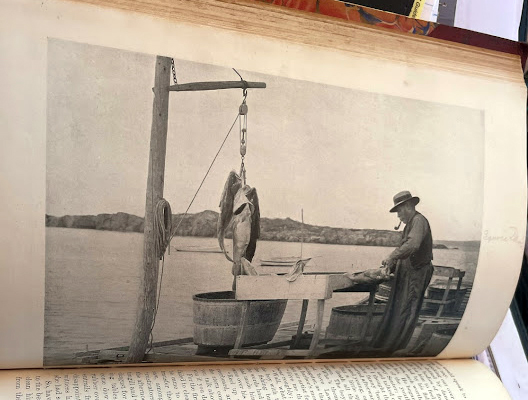 A picture included with the short story, “The Fog that Cleared Things,” shows Reuben “Squire” Davis, a Monhegan Island fisherman, with a catch. The story was published in Outing in June 1903 and is part of a homemade anthology book about Monhegan Island that was gifted to the Monhegan Museum of Art & History on Saturday, July 23. (Evan Houk photo)

Pye told the story about how the Influence got its current name. During Prohibition, some of the men would gather in the basement of the building and play cards and have drinks, according to local legend.

“It was said they were ‘under the influence,’” Pye said. “That’s the story, whether or not it’s true.”

Reuben “Squire” Davis is identified with a pencil, presumably by Arthur Pierce, in a photo included with the fictional short story, “The Fog that Cleared Things,” which Pye said she has never seen.

Pierce identified the majority of the people and places featured in the photographs in the book.

“I also am excited about these photographs that are with the fiction, but the people and places have been identified by Arthur Pierce, I’m guessing,” Pye said.

Pye said she hasn’t read “The Girl of the Gray Sea,” a short story by Jennette Lee that was published in Harper’s in July 1908. After glancing through the story, she noted that there didn’t appear to be any specific references to Monhegan that would necessarily tie it to the island.

“The ones like that are a little harder to track down because it doesn’t specifically say it’s Monhegan,” Pye said.

However, she said it makes sense that the inspiration for the story would be Monhegan since Lee had spent time on the island.

An article, “Plants on Monhegan,” is a botanical compendium of the flora on the island in 1900. Pye said she knew the list existed but does not believe the museum owned a copy of it before receiving Pierce’s book.

“For people interested in botany, there is another list from around 1970 and another list from 1980. So to see how that changed over time, what was blossoming and what time it was seen, is particularly interesting,” Pye said.

“It’s such a window into a time,” Pye said about the book. “This will be fun to spend more time with.”