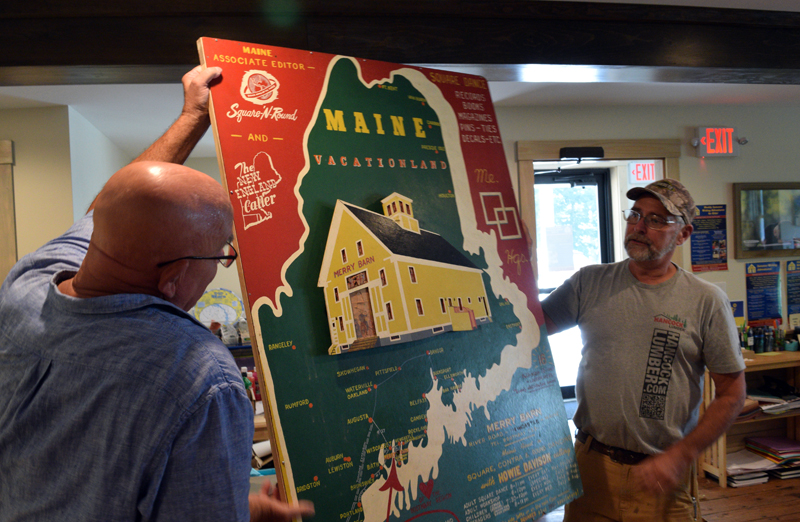 After about 35 years, a Merry Barn dance hall sign, handmade by former owner Howie Davison, was returned to the 1905 barn by Gup Gascoigne, a resident of Edgecomb and Denville, N.J.

Davison started a dance hall in the Merry Barn in 1951, taught square dancing, and held dances for teenagers and children that would sometimes attract up to 600 visitors.

An unveiling ceremony was held with Gascoigne, Davison’s relatives, people who reminisced about the dances that were held in the barn until 1975, and Stephanie Noyes McSherry, the founder of the Merry Barn Writers’ Retreat and Educational Consulting, which is housed in the building now.

Gascoigne said that after holding onto the sign since the late 1980s, he decided it belonged at the Merry Barn and not at his home in New Jersey.

Gascoigne used to visit a farmhouse on River Road in Edgecomb with his family in the 1950s and 1960s, he wrote in a recollection of how he came to acquire the sign.

“Among the highlights of our time in Maine were trips to Gilbert’s lobster pound, Pemaquid, the Union Fair, golfing at Wawenock, and of course, the Merry Barn,” Gascoigne wrote. “All 13 of us would travel together in my grandmother’s pick-up truck. My grandmother, Myrtle Gascoigne, owned Maine Antiques in Newcastle at the time (now Newcastle Publick House).”

One day in the late 1980s, Gascoigne was driving on River Road to visit his dad and he noticed the Merry Barn’s doors were open. He found that Davison was closing the barn and selling many of its contents. 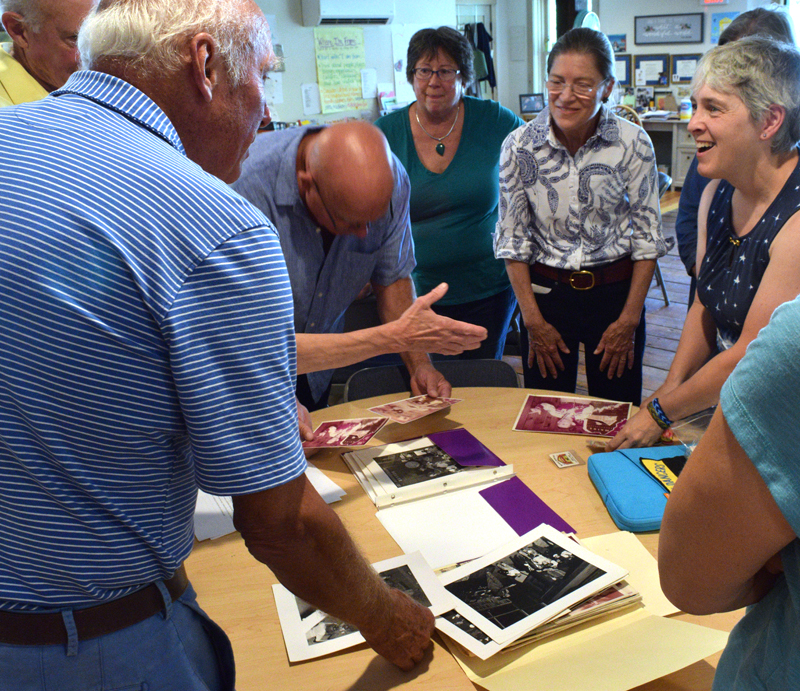 Heather Webster, daughter of former Merry Barn owner Howie Davison, (right) reminiscences about different dances held in the Edgecomb hall from 1951 until 1975 on Tuesday, Aug. 16. That day, Gup Gascoigne, a resident of Edgecomb and Denville, N.J., returned an original sign hand-painted by Howie Davison to the barn after nearly 35 years. (Evan Houk photo)

“When I asked about the sign he so painstakingly created which extolled the virtues of the famed dance hall, he quickly said it meant a great deal to him and was not for sale. I fully understood and didn’t press the issue,” Gascoigne wrote.

He then told Davison the story of how was shy and “used to hang out by the sign and marvel at it because I was too shy to dance.”

Davison paused briefly and told Gascoigne he could take the sign.

“The sign that made such a big impression on me those summer nights as a young boy was now presented to me by its creator!” he wrote.

The sign is about 4 feet tall and includes a hand-painted map of Maine that shows how far the Merry Barn is from various places in the state. It also has lights on it that show through holes in the wooden sign.

The original beams and hardwood floor are still visible in the 1905 building and continue to hold it in place.

In 1768, Joseph Merry acquired the property through a land grant. When he died, the land was split between his children, according to Langdon. The Merrys also owned the property across River Road, where a large white house sits.

The “M” in Skidompha, the name of the library in downtown Damariscotta, is for the Merry family because Charles Glidden Merry was one of its founders, McSherry said.

McSherry bought the barn in 2015 to fulfill her dream of opening a literacy center. The Merry Barn Writers’ Retreat and Educational Consulting now hosts workshops and retreats for all ages. For more information, go to merrybarn.com.