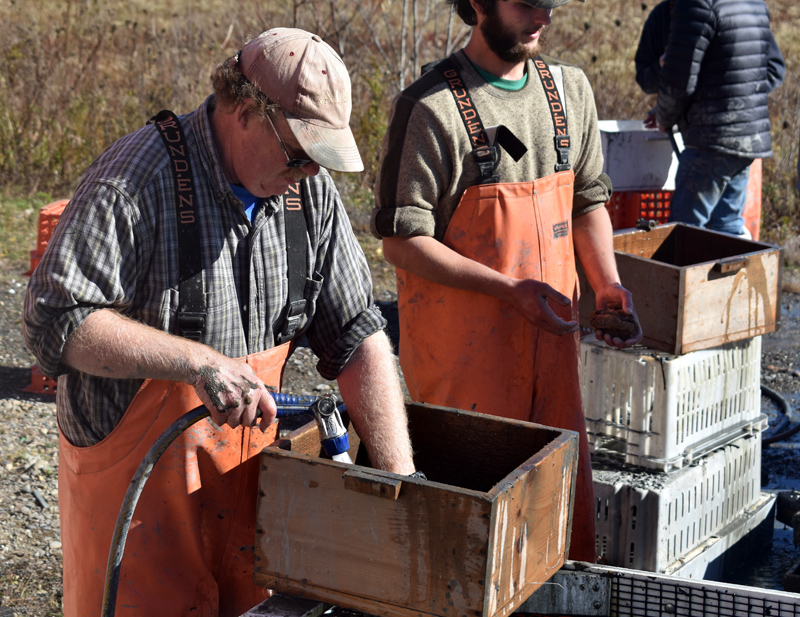 Scientists from the Downeast Institute and Bremen shellfish harvesters were on the flats Friday, Nov. 1 for the latest step in an experiment that aims to determine the impact of “brushing” on local clam populations.

According to Brian Beal, a professor of marine ecology at the University of Maine at Machias and director of research at the Downeast Institute, Friday’s field sampling was part of the first-ever experiment to determine the efficacy of brushing. The traditional technique involves the insertion of tree boughs into the mud flats to reduce currents and encourage settlement of juvenile clams.

“No one has studied the efficacy of brushing to date and it is something that has been done for more than half a century, at least, up and down the coast of Maine,” Beal said.

The study will measure the effectiveness of this method and compare it to the impact of using netting to protect against predators. Work started in May.

Friday morning, scientists and harvesters worked together to pull 180 “benthic cores,” or samples, and 54 recruitment boxes out of the mud in Broad Cove, hauling them onto shore at the Hay Conservation and Recreation Area. 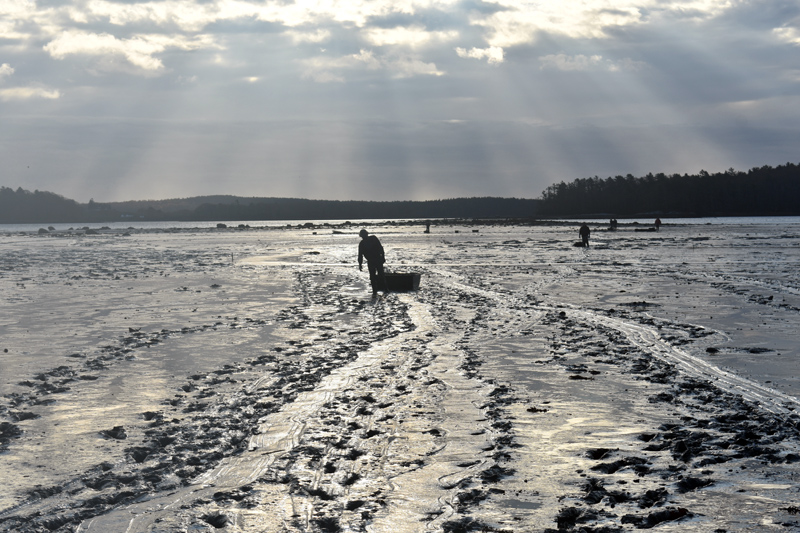 A shellfish harvester hauls a jet sled across Broad Cove to collect clam samples as part of a study to determine whether the traditional method of brushing works to increase clam populations. (Alexander Violo photo)

Beal said the contents of the cores and boxes will be analyzed to determine how many clams settled and survived.

Scientists and shellfish harvesters trudged through the mud for a quarter to a third of a mile, removing copious amounts of mud along with the equipment.

For three residents, helping out with the field study was a family event. Maryanne and Kevin Griffin, with their son, Nickolas Griffin, all took part in the work.

Maryanne Griffin said her husband has harvested shellfish for years and she has joined him on the flats a couple times.

Boe Marsh, a Bremen selectman and shellfish committee member who owns the seafood wholesaler Community Shellfish, also helped out on the flats. He said the work gave him an appreciation for the backbreaking labor shellfish harvesters put in every day.

Marsh described the study as a comparison between two techniques to promote clam growth. 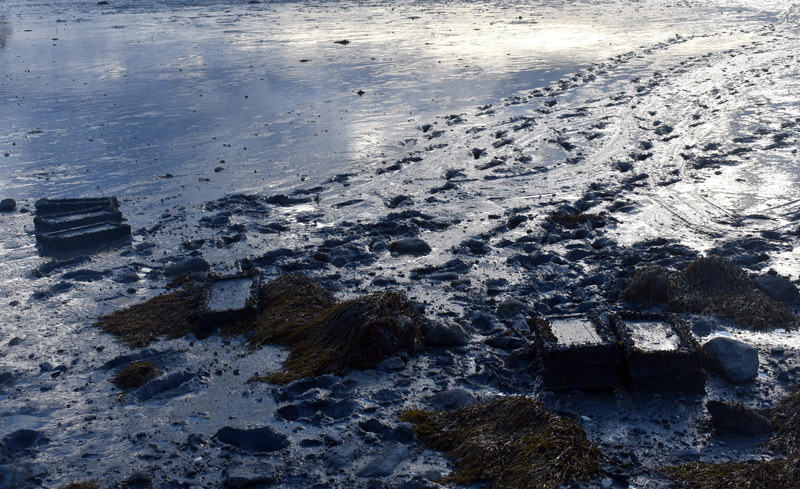 “Brushing provides a structure that slows down the current, with the idea being it creates a better environment for clams,” Beal said.

Bremen was one of three locations for the study on the Maine coast, along with Gouldsboro, in Hancock County, and Harpswell, in Cumberland County. The study deployed three sets of brush in each town, all in May.

In addition to brushing, the scientists deployed nets used to protect clams from predators. 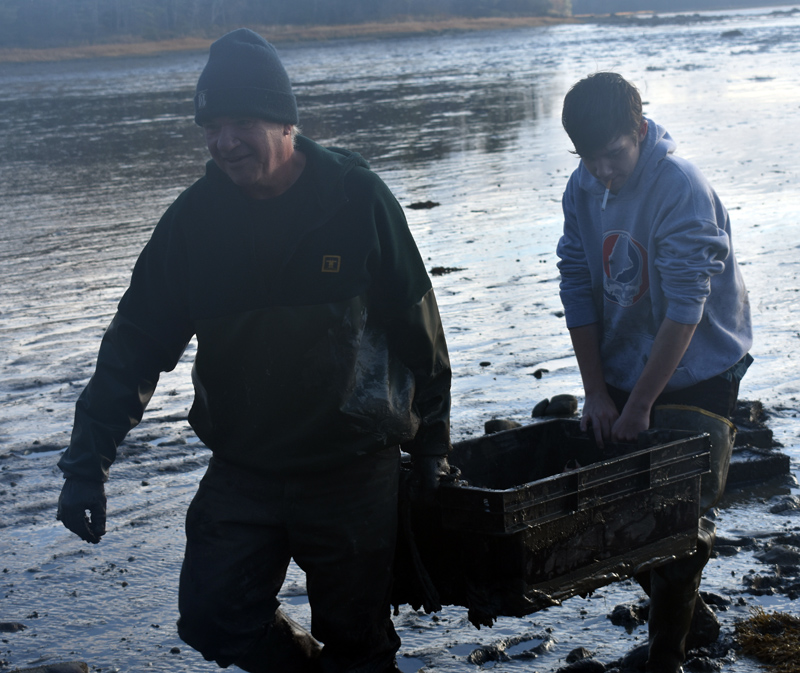 “A reason we did this was, no one has studied this in a way that scientifically compares the distinction between brushing and net protection areas,” Beal said.

According to John Alspach, who was collecting samples with the Downeast Institute, the recruitment boxes were placed in the study plots.

“Each plot has a box, where the clam seeds can go through and settle inside,” Alspach said. Data from the boxes will be used to determine the results of the field study.

“We’ll compare how many seeds might hatch there to other areas,” he said.

Beal said all plots, including control plots, had 1-by-2-foot these recruitment boxes. 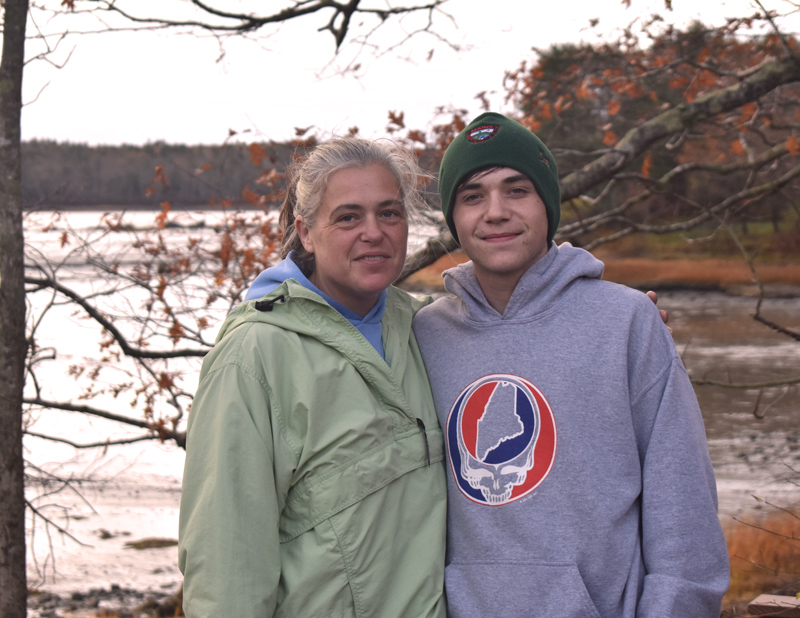 Maryanne and son Nickolas Griffin, of Bremen, were among the group on hand to help the Downeast Institute with field work for a clam study in Broad Cove the morning of Friday, Nov. 1. (Alexander Violo photo)

“The boxes passively collect sediment from the water column and the planktonic larvae in it,” Beal said.

Beal said the clams are particularly vulnerable in their youngest stages of life to green crabs, an invasive species and formidable clam predator.

“They both share a planktonic life cycle, but the crabs are five times larger than the clams,” Beal said. He said ribbon worms are another formidable predator for soft-shell clams.

Beal said the results of this experiment will provide fishery managers across the coast with tools they can use to increase clam harvests and adapt the fishery to the warming waters of the Gulf of Maine.

The Downeast Institute is a research institute in Beals that works to improve the quality of life for the people of Down East and coastal Maine through marine research and marine science education.