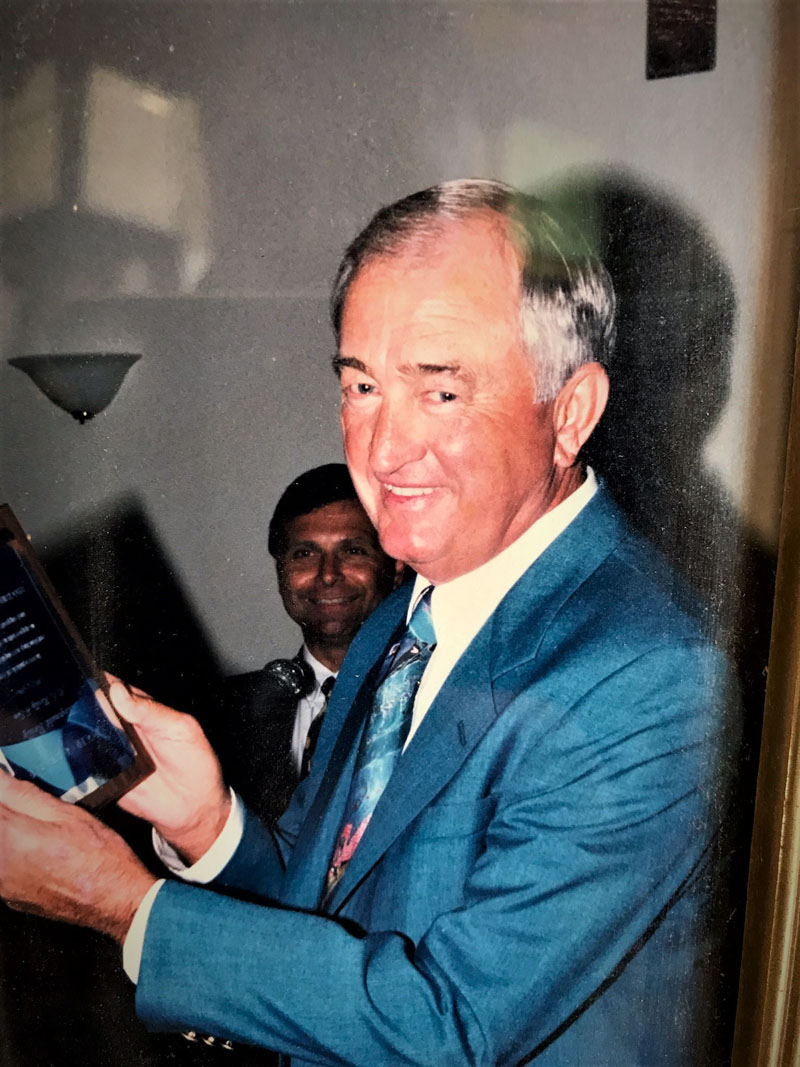 Local grocer Reginald Reilly, of C.E. Reilly & Son, wins an award for 50 years of loyalty and support as a member of the Associated Grocers of Maine in 2006.

Local business owner Reginald Reilly, of C.E. Reilly & Son in New Harbor, passed away at the age of 90 on Nov. 12. A mentor and great-grandfather, Reilly leaves behind the legacy of an enduring family business and a community grateful for his leadership.

“He gave a lot of kids an opportunity to work at the store,” Paul Yates, an employee of C.E. Reilly & Son for 54 years, said.

Yates was mowing the lawn across the street from the C.E. Reilly & Son grocery store at the age of 17 in May 1967, when he walked over for a pint of milk and Oreos. Reilly called out, “Hey sport, want a job?”

He has been an employee ever since, working six days per week at 71 years old.

“He was a phenomenal man,” Yates said, “but you couldn’t be a wimp” working for Reilly.

He was regimented and meticulous about running a clean store, and held his employees to the same standards, Yates said.

He remembers the days when the grocer had fresh cuts of beef hanging in the freezer, and Yates was responsible for lining the sawdust underneath to catch the drips of blood. If the lines of sawdust weren’t perfectly straight and neat, “there was hell to pay,” Yates joked.

“He gave you backbone,” Yates said, but respected employees when they worked hard and shared his attention to detail.

Many former employees have reached out to the family on Facebook, saying it was Reilly who instilled in them a strong work ethic and uncompromising principles.

“There hasn’t been a week since I’ve been here that he didn’t pay his employees,” Yates said, even during tough economic periods.

The grocer was also particular about his own appearance, Carl Reilly, Jr., Reilly’s grandson, said. He always wore khaki pants; he never wore jeans, “even when he was raking the leaves,” Reilly, Jr., said. 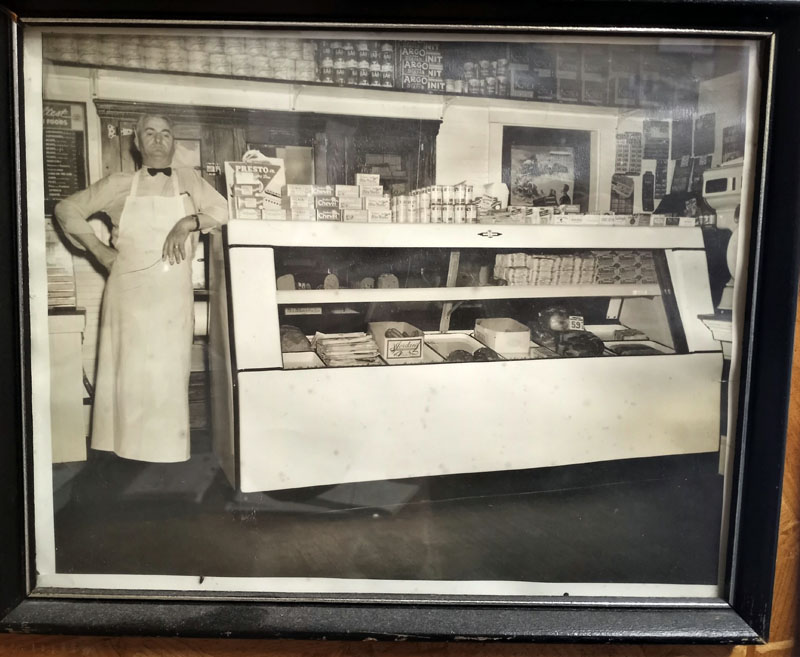 A photo of grocer Carl E. Reilly hangs on the wall of the C.E. Reilly & Son office. He opened the business in the 1920s.

Up until recently, employees of C.E. Reilly & Son were required to wear neckties to work. 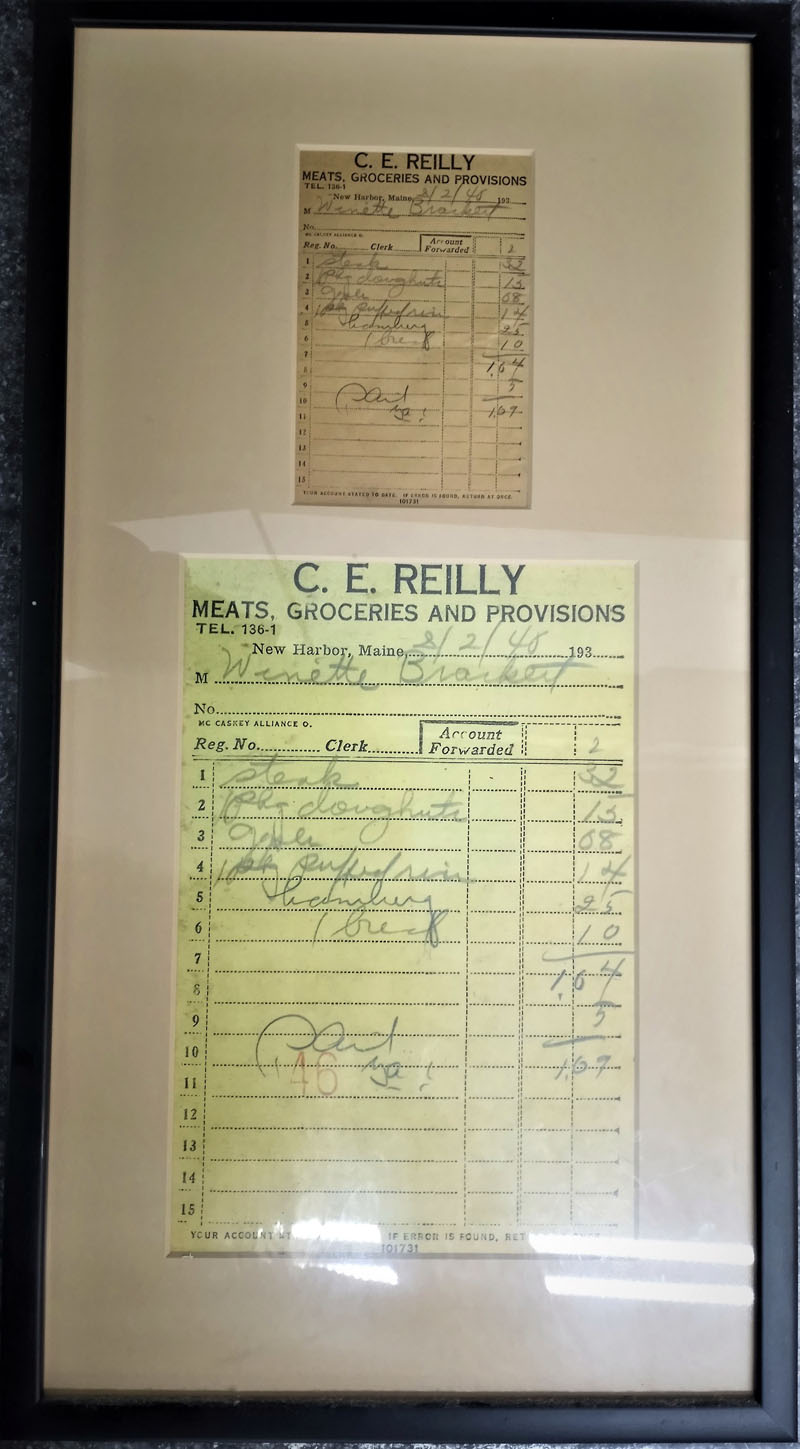 Reilly brought the same character and care to his family that he did to his father’s grocery business. He was married to Elizabeth Dwinell, his high school sweetheart, for 71 years. He had three children, Carol Lee Crooker, Carl Reilly, Sr., and Kim Hodgdon; four grandchildren and eight great-grandchildren. He lived to meet two of his great-great granddaughters, and watch the C.E. Reilly & Son grocery store pass on to the fifth generation of the family operating it.

“Family was so important to him,” Carl Reilly, Jr., said, “and he tried to balance the two.”

Born in Damariscotta and raised in New Harbor, the late Reginald Reilly grew up working in the store alongside his father, the original Carl E. Reilly, who opened the business in the 1920s.

Like his father, Reginald Reilly became a mentor for his grandson Carl Reilly, Jr. Over the past 33 years, he taught his grandson about the business and how he believed it should be run – with integrity and with products for year-round residents, not just summer tourists.

“It was so clean all the time you could eat off the floors,” Jaeger said.

Reilly bought and sold numerous properties in the surrounding area to keep the grocery business going, Reilly, Jr., said, including the land used for the housing developments on Pumpkin Cove Road in New Harbor.

He put the money he made back into the grocery business by adding a larger side section in 1987, and back into the community by donating to the New Harbor Methodist Church, the Bristol school and the Bristol Historical Society.

“That’s just the kind of man he was,” Yates said.

Last month, the church reignited a fundraising campaign for a new bell tower after the old one was removed for safety reasons in 2016. Reilly’s family is asking for donations to the effort in lieu of flowers “to honor Reggie’s deep commitment to the community,” according to the obituary.

“He wasn’t a real religious man,” Reilly, Jr., said, “but he was all about community.”

Reilly was also a fan of baseball, and there was one joke he told just about everyone he knew, including the doctors operating on his hip, Reilly, Jr., said: “Two old men had been best friends for years when one of them falls deathly ill. One friend says: ‘Listen, when you die, do me a favor. I want to know if there’s baseball in heaven.’

A few days later, the surviving friend is sleeping when he hears his friend’s voice: ‘I’ve got some good news and some bad news. The good news is there is baseball in heaven.’