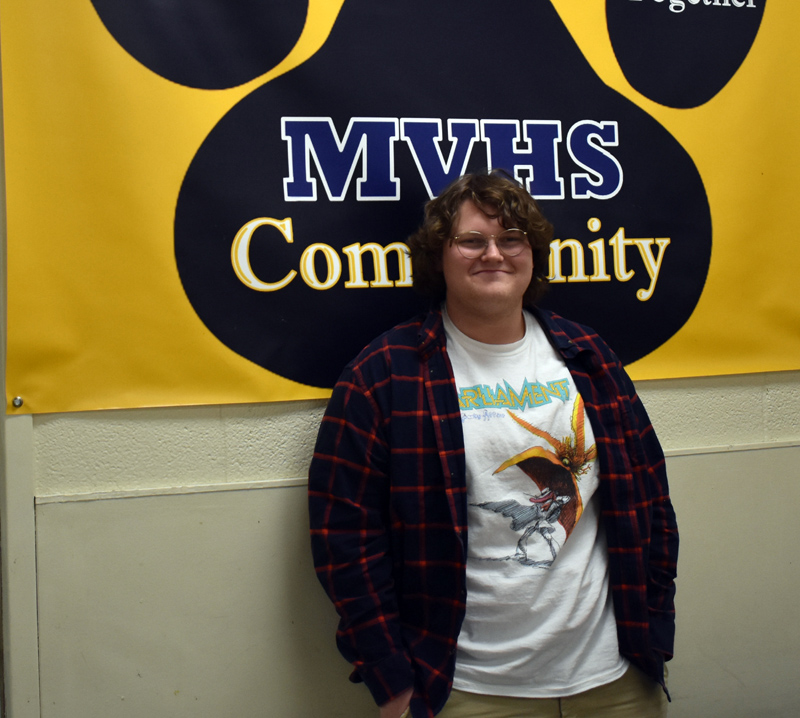 Benjamin Martin, a senior at Medomak Valley High School in Waldoboro, hosts a radio show on 93.3 WRFR-LP in Rockland from 7-8 p.m. on Sundays. (Alexander Violo photo)

A Medomak Valley High School student is finding his groove and sharing the music he loves with others by volunteering at a community radio station in Rockland.

Benjamin Martin, a senior at the Waldoboro high school who listens to a wide variety of music and appreciates classic vinyl, volunteers at 93.3 WRFR-LP, a community radio station, hosting a one-hour radio show every Sunday night.

“It’s been really fun. I get to play music and I have a blast doing it,” Martin said.

According to Martin, he started broadcasting about a month ago on WRFR-LP. (The “LP” in the station’s name stands for “low power.” WRFR-LP was one of the first low-power community radio stations in the U.S. Low-power broadcasting operates at low electrical power and serves a smaller area than full power stations.)

Martin said the show gives him an opportunity to play music that doesn’t always make it onto commercial radio stations.

“Normal radio can be bland; they play the same 100 songs. Hopefully with my show you get to hear something different,” Martin said.

Martin, sporting a Parliament T-shirt, a funk band from the 1970s, known for its live performances and funky style, described his taste in music as eclectic, explaining his radio show lets him share the music he enjoys with others.

“I like to think I have a wide variety of tastes — I try to be all over. I play what I am into recently and hope other people are into it as well,” Martin said.

Martin said when he started his show he got a tutorial on how to broadcast from the Rockland studio and hit the ground running. “They gave me a rundown. There are only a few things you have to do: you turn off the continuously playing music, talk a little bit, and play whatever you want,” Martin said.

On top of volunteering at the radio station, Martin said he works at Hannaford Supermarket in Rockland.

Martin said he is not sure how long he will do the radio show, but said he was looking to continue at WRFR until he starts college. “I could see doing it until I go to college, but I’m doing it now and I’m enjoying it while it lasts.” Martin said.

Martin said his show on Sunday, Dec. 8 went well and he played some Elton John, Prince, and Sly and the Family Stone.

“I think it is about getting the music out there — people listen to a lot of the same stuff. I just want to put it out there. People can listen to it or not; at least it gets people thinking or listening to something they’ve never heard, something different,” Martin said.

Martin said working at the community radio station has introduced him to more music and he is excited to continue to discover new music moving forward.

“There’s so much music out there. I’m just scratching the surface, and I look forward to keep scratching that surface,” Martin said.

Martin said he first got into music when he was about 10 years old and used a base of 1980s pop to expand to hip hop and other genres of music.

“I never got into music until I was about 10, started with ’80s pop. My father was into DMB (Dave Matthews Band) and I listened to video game music,” Martin said.

“My brother used to work there, had his own show a couple years ago,” Martin said, adding his brother works at RedTail Records, a student-run, campus-based record label at the University of Hartford in Connecticut.

Martin credited his brother for getting him into his first band, Blink-182. “One of the first bands I was really into was Blink-182. He (Ryan Martin) got me into that,” Martin said.

From there, Martin said he started listening to rap and other musical genres.

“I started to figure out what I really liked, wanted to move on to something different and I started listening to the Talking Heads, Devo, and moved through New Wave,” Martin said, referencing rock and pop styles of the late 1970s and 1980s.

Martin said he started listening to Prince after watching the film “Purple Rain.” “It was the coolest thing I’d ever seen,” Martin said.

Regarding his favorite album, Martin said it’s hard to pick one, and his favorites are always changing.

“I really like Marvin Gaye. I was obsessed with ‘I Want You.’ I was trying to find it for a while and had to order it I’ve been really into ‘Motor Booty Affair,’ by Parliament lately,” Martin said.

Martin said he listens to music on his smartphone but also enjoys listening to records on vinyl and has been getting into cassettes.

In addition to his radio show on WRFR, Martin shares the music he loves daily through his Instagram story on his profile, benmartin29.

Martin said he has taken some lessons on bass guitar and is interested in learning how to play the drums.