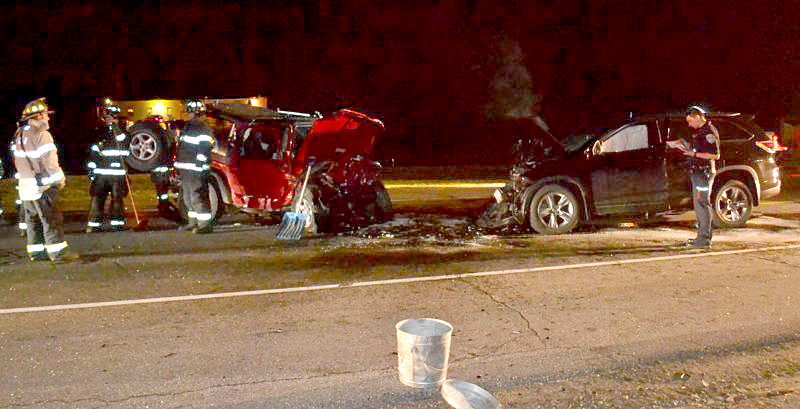 The drivers of both vehicles in a head-on collision on Route 1 in Wiscasset were transported to area hospitals the evening of Thursday, April 20. (Abigail Adams photo)

A teenage driver looking at a GPS caused a head-on collision on Route 1 in Wiscasset that closed both lanes of traffic for more than an hour the evening of Thursday, April 20.

The drivers of both vehicles were transported to area hospitals with non-life-threatening injuries. The accident occurred around 7:45 p.m. in the vicinity of Wiscasset Ford.

Knowles was looking at his GPS when his Jeep crossed the centerline, clipped the BMW, then collided head-on with the Toyota Highlander, according to Simmons.

Suzan Theriault was not hurt, Simmons said. David Theriault was transported to Maine Medical Center in Portland. As of Monday, April 24, Theriault was in satisfactory condition, a hospital spokeswoman said.

Knowles was transported to Mid Coast Hospital in Brunswick, Simmons said. A hospital spokesperson said the hospital could not release information about a minor.