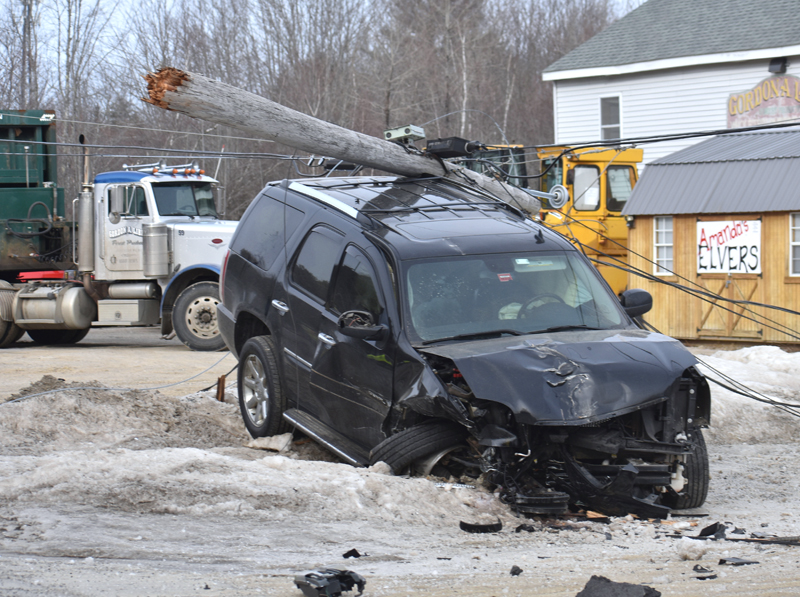 A utility pole rests atop a GMC Yukon Denali SUV after a two-vehicle collision on Route 1 in Waldoboro the morning of Tuesday, Feb. 12. There were no injuries in the crash, according to police. (Alexander Violo photo)

There were no injuries in a head-on collision of two SUVs on Route 1 in Waldoboro the morning of Tuesday, Feb. 12, according to police.

The collision brought a utility pole down onto one of the vehicles, and both electrical and telephone wires down onto the road, forcing authorities to close Route 1 until Central Maine Power Co. could clean up.

The collision was in the vicinity of Gordon Libby Forest Products Inc., at 808 Atlantic Highway, near the intersection with West Main Street.

Deborah Burgess, 63, in a white Chevrolet Trailblazer, was attempting to turn left from West Main Street into the southbound lane of Route 1, according to Waldoboro Police Officer Jeffery Fuller. Katrina Kelly, 38, of Newcastle, was driving a black GMC Yukon Denali north on Route 1.

According to a press release from Fuller, Burgess did not yield the right of way to Kelly and the vehicles collided head-on. 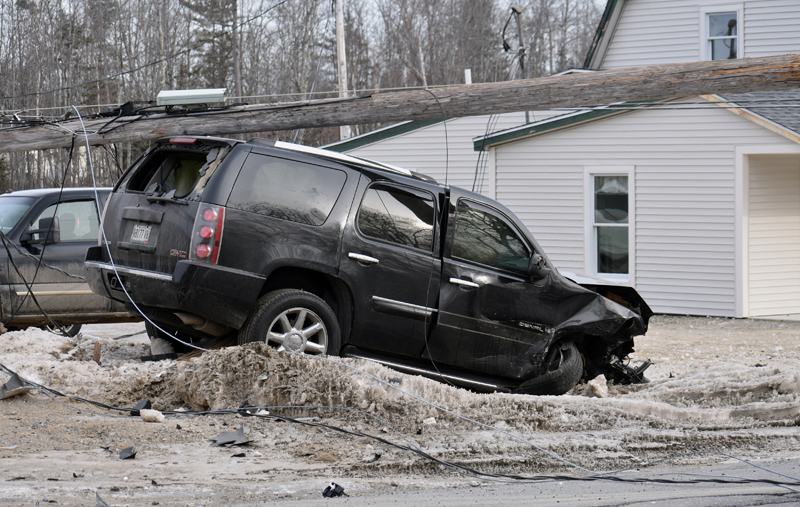 A utility pole rests atop a GMC Yukon Denali SUV after a two-vehicle collision on Route 1 in Waldoboro on Tuesday, Feb. 12. Another SUV entering Route 1 did not yield the right of way, according to police. (Alexander Violo photo)

After the collision in the middle of the highway, the GMC proceeded off the southbound side of the road and knocked down the utility pole on top of itself before coming to a rest on a snowbank in a parking lot near the Route 1 business, according to Fuller. The Chevrolet came to a stop in the southbound breakdown lane of Route 1.

Both vehicles were totaled, according to Fuller. The drivers were evaluated at the scene but did not require transport to a hospital.

While the road was closed to traffic, northbound and southbound traffic was detoured onto West Main Street.

CMP, the Maine Department of Transportation, Waldoboro Emergency Medical Services, and the Waldoboro Police Department also responded to the scene.