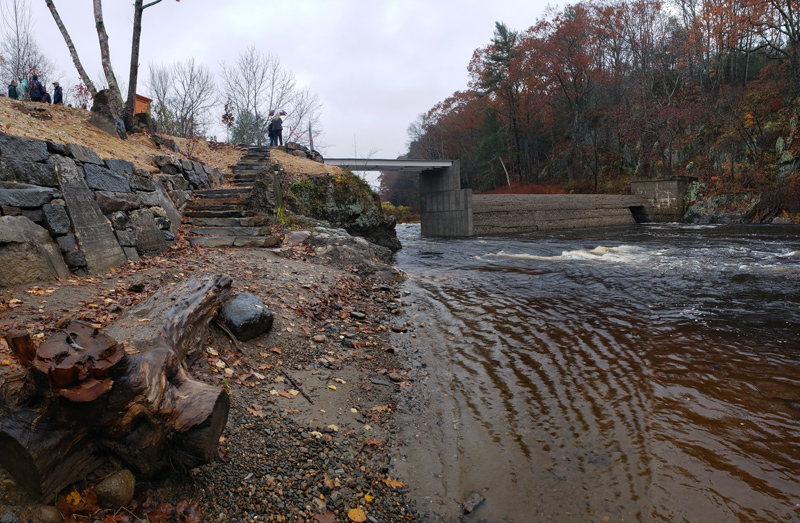 Although work continues on a few parts of the project, a large crowd gathered Thursday, Oct. 31 in pouring rain to celebrate the near-completion of the Head Tide Dam modification project.

The modification of the dam is the second project of a multiple-year initiative to improve fish passage in the Sheepscot River, enhance public safety and access, and honor the history of individual sites.

The partners for the initiative include the Atlantic Salmon Federation, Midcoast Conservancy, The Nature Conservancy, and other conservation organizations.

At the dedication event, one representative each from the Atlantic Salmon Federation, the National Marine Fisheries Service, and the town of Alna spoke about the years of work to better the site.

“I can’t say enough about the partners in the project, and also the Atlantic Salmon Federation – you’ve really given the town of Alna an incredible gift that’s going to outlive us all,” said Alna Third Selectman Greg Shute, the town lead for the project. 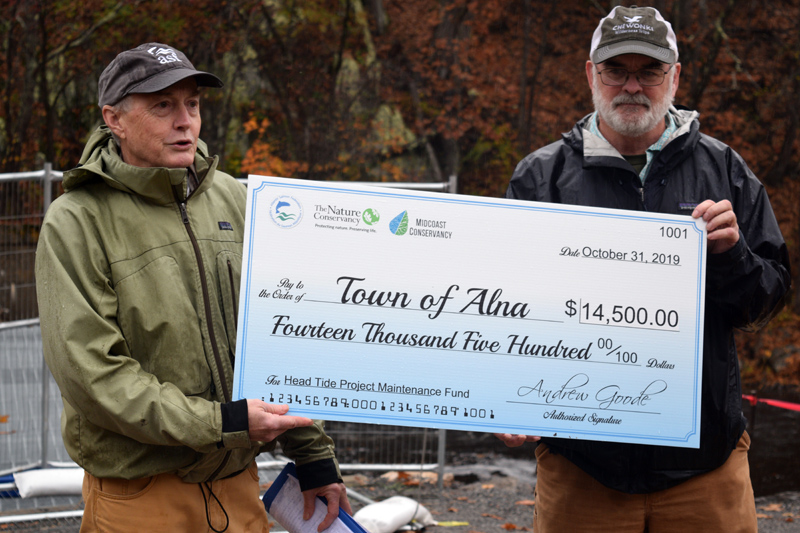 Andrew Goode, the vice president of U.S. programs at the Atlantic Salmon Federation, handed the selectman a $14,500 check for maintenance of the site.

The project went smoothly, according to Maranda Nemeth, Maine Headwaters project manager for the Atlantic Salmon Federation, who helped coordinate various parts of the projects. Until recently, Nemeth worked for the Midcoast Conservancy as its watershed restoration specialist.

A deteriorating two-tier overlook at the site was demolished and replaced with a single-level overlook made of concrete, with a steel grate for the floor. Once work is complete, the overlook will comply with the Americans with Disabilities Act.

A retaining wall was built downstream of the western abutment with granite blocks and concrete pillars, to shore up an eroding slope.

Shute thanked the contractor and subcontractors for the project. “The stonework, it’s more than stonework – it’s artwork,” he said of the wall. 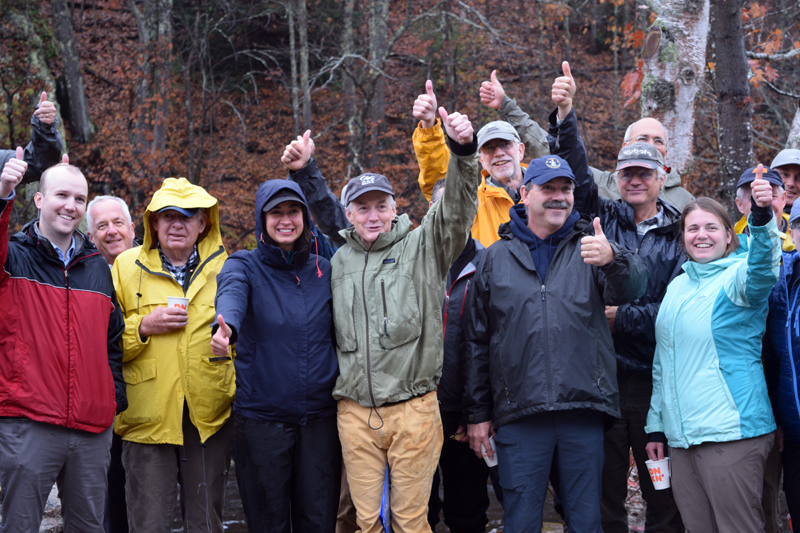 Some of the crowd at the Head Tide Dam dedication gives a thumbs up to the nearly complete project. (Jessica Clifford photo)

Although the public could access the water before, the project added a new, safe trail. Stones were used for steps in the steep sections and stone dust laid in between.

The lead engineer for the project was Mike Burke, of Inter-Fluve Inc., which has an office in Damariscotta.

SumCo Eco-Contracting LLC, of Massachusetts, a civil construction firm focused on ecological and environmental improvements, was the construction contractor.

Local subcontractors included West Alna Welding Fabrication & Design, which did the steel fabrication for the overlook; Clear Pine Carpentry Inc., which did the landscaping; Jeffrey Verney Excavation, which assisted in the excavation; and Auburn Concrete, which supplied the concrete.

“From a town perspective it’s been a really wonderful collaborative project,” Shute said. “The Sheepscot really is one of the defining natural characteristics of the town – it’s why the town is here to begin with.”

According to a press release from Midcoast Conservancy, the total construction cost for the project came in at $515,000. There was no cost to Alna taxpayers.

According to Goode, the project was paid for with public and private grants and donations.

Nemeth said the remaining pieces of the project will be completed by Thanksgiving. 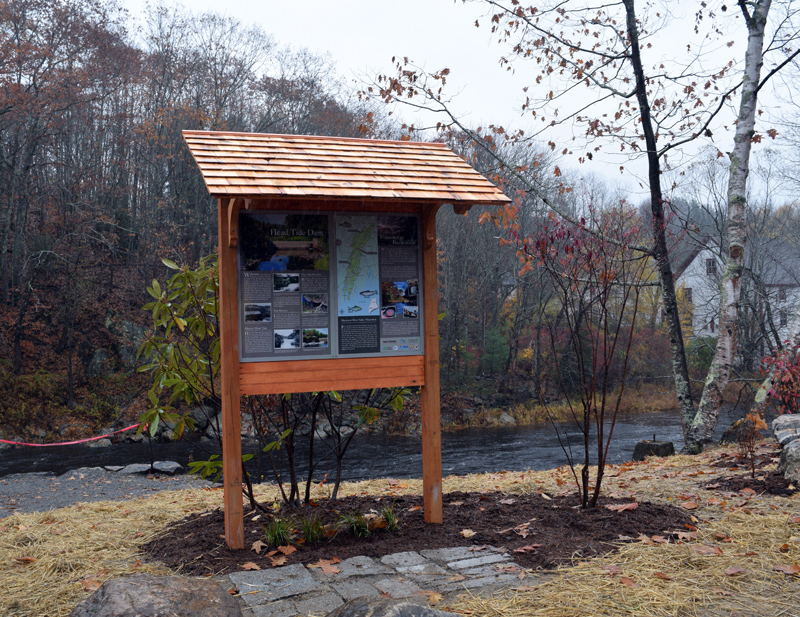 A new informational kiosk at the Head Tide Dam gives historical information about the site, the modification project, and the Sheepscot River. (Jessica Clifford photo)

Railings will be installed around the new viewing platform, which is currently fenced off to prevent people from walking on it. Attached to the railings will be interpretive signage with information about the history of the site. A bench will be mounted on the platform.

A railing will also line the new pathway for safe public access to the water.

According to the new informational kiosk at the dam site, the Jewett family donated the dam to the town in 1964. A challenge in the project was deciding whether work could proceed due to a covenant in the deed stating the dam could never be destroyed.

The partial dam removal and construction of the overlook platform – maintaining “one contiguous line from shore to shore” – was deemed acceptable by Alna selectmen and legal counsel, Goode said in an email after the dedication.

The Head Tide Dam is the first dam on the Sheepscot River and listed as a unique natural area in The Maine Atlas and Gazetteer.

According to Goode, the project was able to take a declining site and make it an asset for Alna. 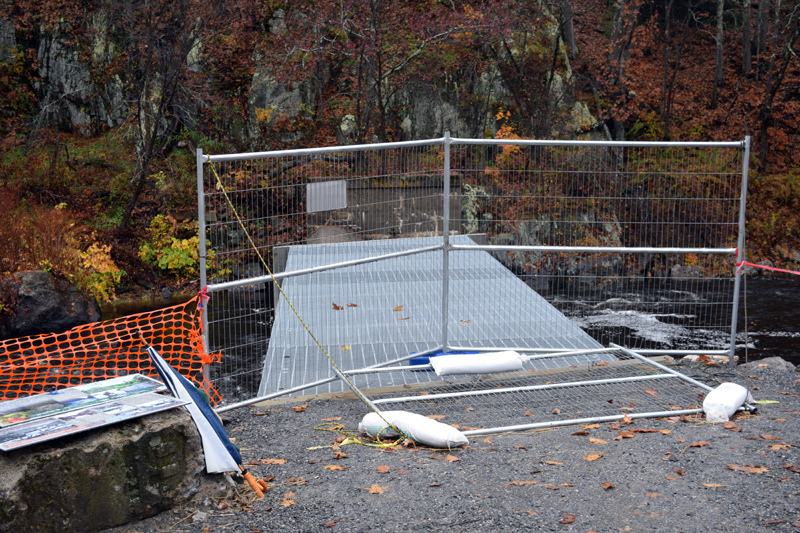 A fence blocks off the new overlook at the Head Tide Dam, which does not yet have railings. (Jessica Clifford photo)

Goode thanked the past and current selectmen for their help over the past few years.

“They’ve been through this process with us,” Goode said. “Sometimes it was one step forward and one step back, but they always provided great guidance to the different folks working on it.”

In 2015, the Midcoast Conservancy and the Atlantic Salmon Federation approached the town to see if they could improve fish passage at the dam. As a result, citizen committees were formed to help decide the future of the dam.

At town meeting in 2017, Alna voters overwhelmingly agreed to enter into a contract with the Atlantic Salmon Federation to modify the dam.

Prior to the vote, there was a range of opinions on the dam, including some in favor of leaving it unchanged. 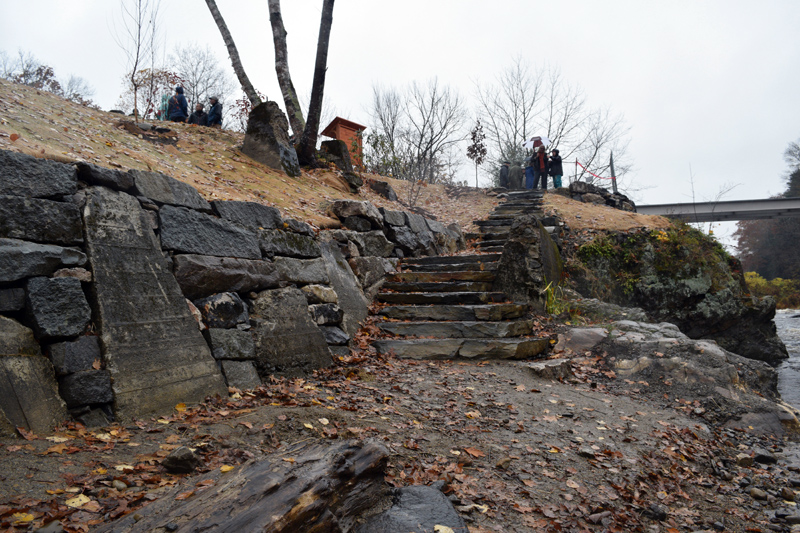 The new retaining wall and stone steps to the river at the Head Tide Dam site. (Jessica Clifford photo)

“In the end, everybody stuck with it, and we were able to come out with what I think is a win-win solution,” Goode said.

“It’s very consistent with what you see up at Coopers Mills, so it can all be a part of a little tour for some people in the future,” Goode said of the sites.

In 2018, the first project in the Sheepscot initiative was the removal of the Coopers Mills Dam in Whitefield.

Besides keeping part of the Head Tide Dam, one of the big differences between the first and second project was not installing dry hydrants at the Alna site.

“They both achieved fish passage, they both opened up the river, and looking at that together and their impact, that’s over 60 miles of river we’ve opened up just with these two projects,” Nemeth said. “It’s exciting to see their impact together.”

Looking forward to 2020, the initiative will move out of Lincoln County to Branch Pond Mill Dam in China, to stabilize it and install a fishway.