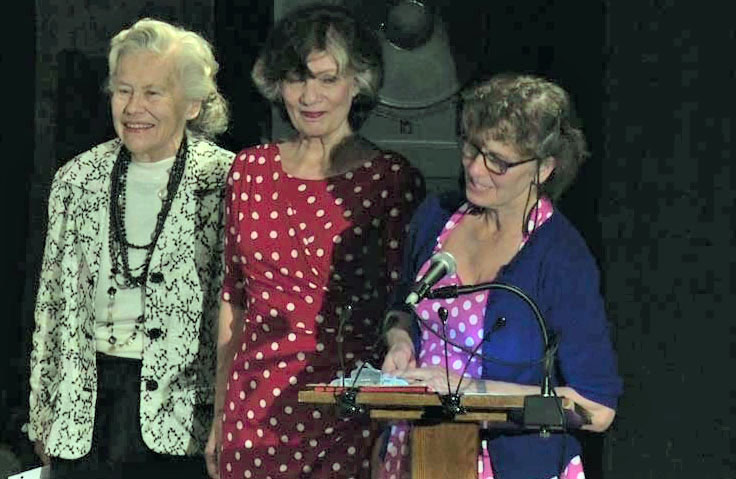 The three Carols from Nobleboro, founders of the senior performing group Hearts Ever Young, address the crowd during the group’s second year of shows and first slate of shows at the Lincoln Theater in May 2011. From left: The late Carol Schell, Carol Cirigliano, and Carol Teel. (Photo courtesy Carol Teel)

After 10 years of fun-filled shows and a whole lot of “razzle dazzle,” the performance group Hearts Ever Young has formally dissolved, leaving its founders and participants conflicted.

The board formally voted to dissolve the nonprofit this past August after much careful deliberation. Hearts Ever Young brought people aged 65 and older together to rekindle and display their wide array of talents during the three performances of the sprawling stage show each year.

“There was a lot of learning that we both got from this,” Cirigliano said. “I think we got more than we gave.”

Cirigliano and Teel both stepped back in 2019, after the 10th anniversary shows on Memorial Day weekend at the Lincoln Theater in Damariscotta, dubbed “A Decade of Razzle Dazzle.”

The “Razzle Dazzle” show was intended to be a mish-mash of all the best parts of the nine previous shows — an old-timey vaudeville-esque revue combining musical numbers, dance routines, and comedic interludes under an overarching theme — and was not originally imagined as a swan song for Hearts Ever Young.

“It was a one-of-a-kind show,” Cirigliano said.

A show was in the works for May 2020, “An Old Fashioned Love,” but could not be performed after the COVID-19 pandemic forced lockdowns in March 2020. Carolee Withee was poised to take over as artistic director and producer but the show could not go on with the Lincoln Theater closed and no way for cast members to gather together and participate in weekly rehearsals.

“COVID really did a number on everybody,” Cirigliano said.

The cast of Young at Heart Productions, the predecessor to the senior performing group, Hearts Ever Young, performs a song together at the Lincoln Theater during one of its first shows in 2011. The cast consisted of an average of about 40 “more senior” people recruited from assisted living homes for the three shows performed each year. (Photo courtesy Carol Teel)

Hearts Ever Young originally started with the three Carols from Nobleboro — Carol Cirigliano, Carol Teel, and the late Carol Schell.

Teel was volunteering at The Lincoln Home helping residents make artwork and she told Cirigliano about the unique stories of the people there.

“She said to me, ‘some of these people have incredible stories … And some of them are just so talented. They should be on-stage,’” Cirigliano said.

Teel saw a performance of the popular 75 and older Young@Heart Chorus in Northampton, Mass. and was inspired to pull together some senior members of the local community for their own stage show.

Teel said she has always loved to dance and has participated in a lot of musical theater with the Lincoln County Community Theater.

“I love to sing and dance,” Teel said.

The plan of Hearts Ever Young was to showcase older members of the community and give them a chance to practice their talents and shine. The Carols recruited members from the Eldercare Network homes and The Lincoln Home to be part of the cast, which averaged about 40 members each year.

The troupe did not have auditions and would try to get everybody to participate whether they had experience or not, Cirigliano said. 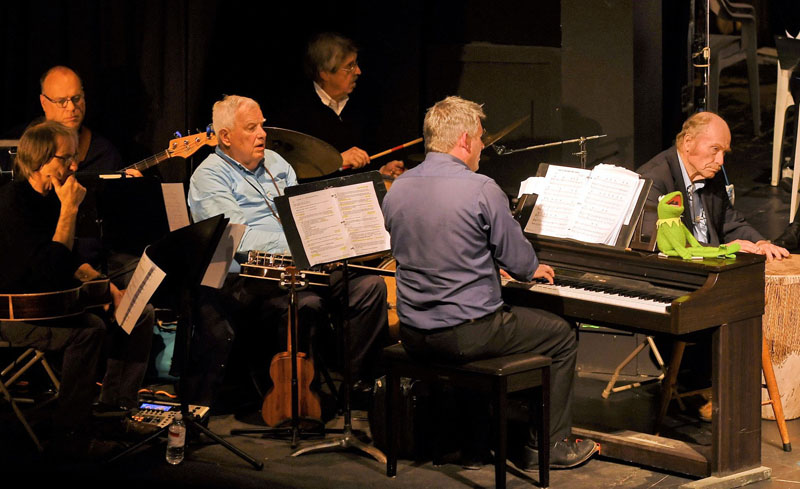 Hearts Ever Young music director Sean Fleming leads The H.E.Y. Makers Band in song during one of the senior performing group’s 10th anniversary shows, “A Decade of Razzle Dazzle,” at the Lincoln Theater in Damariscotta in May 2019. Hearts Ever Young dissolved in August after a COVID-19-induced hiatus. (Photo courtesy Carol Teel)

“We were people-oriented, you might say,” she said. “We took them as they were and wanted to give them the social opportunity, and to have their 15 seconds of fame, so to speak.”

Teel became the artistic director, Cirigliano took on choreographing duties, and Schell was a wizard at generating publicity and raising funds for the fledgling group. Together, the volunteers wrote, produced, directed, and executed the entire show three times each year, many times to a standing-room-only crowd. 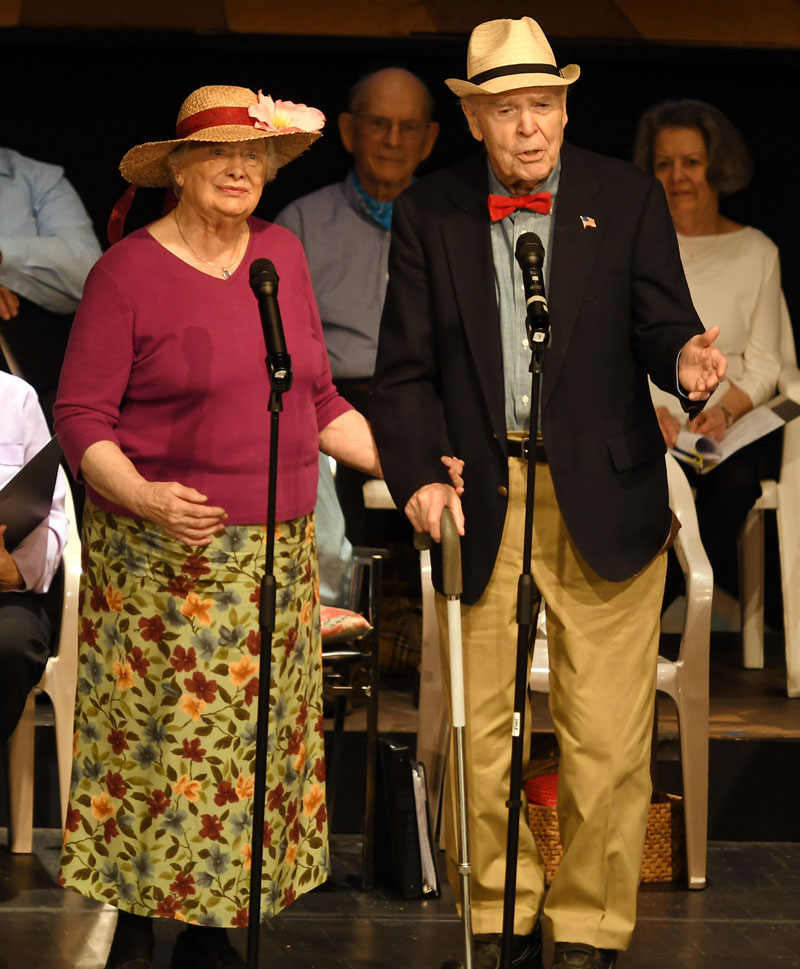 Val and Bob Gorill sing the comical duet, “I Remember It Well,” during one of Hearts Ever Young’s 10th anniversary performances, “A Decade of Razzle Dazzle,” at the Lincoln Theater in May 2019. The shows typically consisted of about 40 “more senior” members of the community performing song, dance, and comedy routines, often to a packed house. (Photo courtesy Carol Teel)

Sponsorships from businesses allowed the troupe to perform its first show at the Waldo Theatre in 2010, when the group was not yet incorporated and still using the name Young at Heart Productions.

At that first show, the approximately 25 cast members stomped on the floor and sang a rendition of Queen’s “We Will Rock You,” with revised and less abrasive lyrics, Teel said.

“That represents how campy it was, how informal it was, but it was such a hit,” Teel said. “I’ll never forget the joy we had doing that first performance.”

“There was so much heart in it,” she said.

Hearts Ever Young never had to charge for a show, surviving on the business sponsorships and a suggested $10 donation for each performance.

“Nobody asked for their money back!” Cirigliano said with a laugh. “The community was supportive and forgiving and generous.”

Over the years, the show had various different themes, such as Broadway, the silver screen, regions of the country, and television.

Cirigliano and Teel both agreed the main focuses of Hearts Ever Young were the people — both cast members and audience — and having fun.

Cirigliano said the comment offered most often by audience members was “you look like you’re all having fun.”

“That was the greatest compliment I think we could get,” Cirigliano said. “That was our goal.”

On average, the chorus consisted of about 40 “more senior” members of the community, aged 65 and older, and the weekly rehearsals at the senior living centers were also an event. 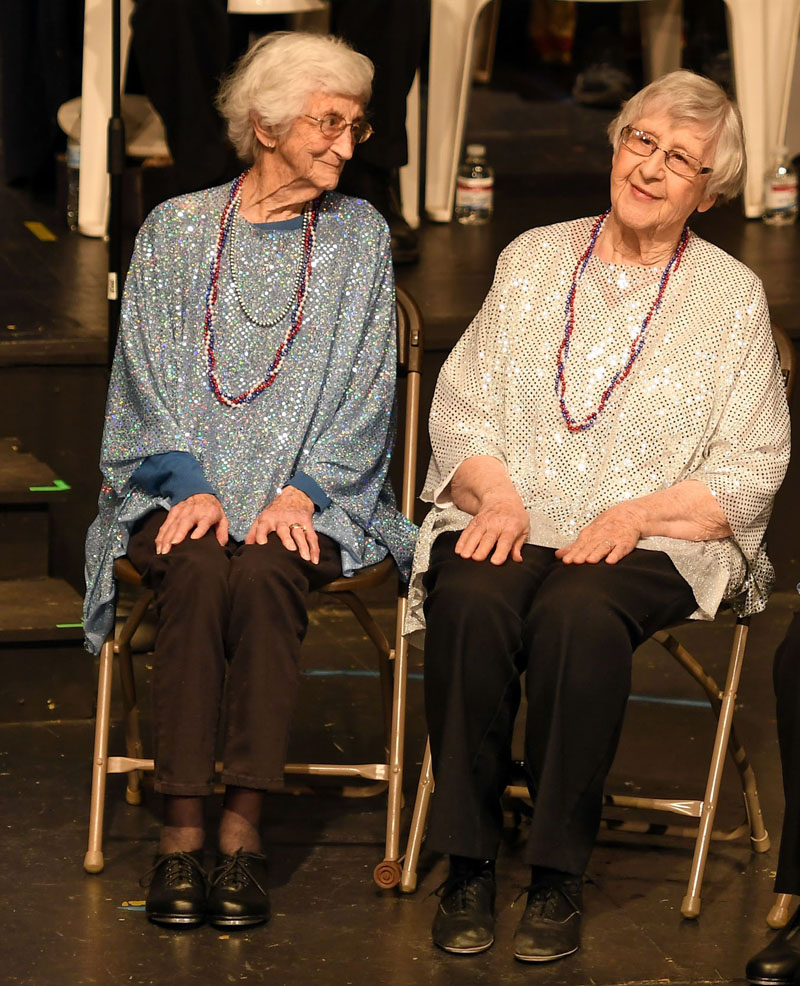 Hearts Ever Young cast members Lila Blechman (left) and Carolyn Gray perform a unique chair-tap routine during one of the senior performing group’s 10th anniversary shows, “A Decade of Razzle Dazzle,” at the Lincoln Theater in May 2019. Co-founder Carol Teel conceived the routine as a way for less mobile people to still tap dance. (Photo courtesy Carol Teel)

“A lot of it — every week we had a rehearsal — was social,” Cirigliano said. “And we became family almost.”

Teel and Cirigliano would tailor the shows to cast members’ interests and abilities.

“We allowed everyone to be who they were, but we did push them,” Teel said.

The biggest hits were the oldest cast members, or when someone had a slight misstep.

“The ones who made a goof or something, they stole the show,” Teel said. “Everyone shined.”

Cirigliano’s late mother, Catherine Cirigliano, once performed a duet singing in Italian, with 101-year-old Lila Blechman, who has been involved since the beginning, answering in English.

“Lila is a comic and she would steal the show,” Teel said.

During an interview at her residence at Hodgdon Green on Nov. 29, Blechman said she enjoyed the opportunity to sing and dance on stage with Hearts Ever Young.

One skit involved Blechman feigning drunkenness, where she ad-libbed. She also had a few solos, singing Shirley Temple’s “Animal Crackers in My Soup” and her claim to fame, the silly “Donut Song.”

Blechman said would she would still be performing with the troupe if they hadn’t disbanded. She said she missed the “camaraderie” with the other cast members more than anything.

“You don’t get to know them all but everybody is always really friendly and happy to be there,” Blechman said. “It was just a pleasure to be in it.”

Blechman also offered some secrets to her longevity.

With musical director Sean Fleming at the helm and a “great band,” The H.E.Y. Makers, the show had an “air of professionalism” despite the light-hearted nature at its core.

Fleming said during an interview on Nov. 29 that he most enjoyed working with the people of Hearts Ever Young and arranging old songs that brought back memories for many.

“It was great to see them perk up,” Fleming said.

One of his favorite numbers was the “Happy Trails” song the cast would sing at the end of each show, waving goodbye to the audience.

“I hope there is another group like it that starts in the future. It really fulfilled a need,” Fleming said.

Hearts Ever Young’s remaining funds will be donated to The Lincoln Home and to the Eldercare Network homes, where many of the rehearsals took place.