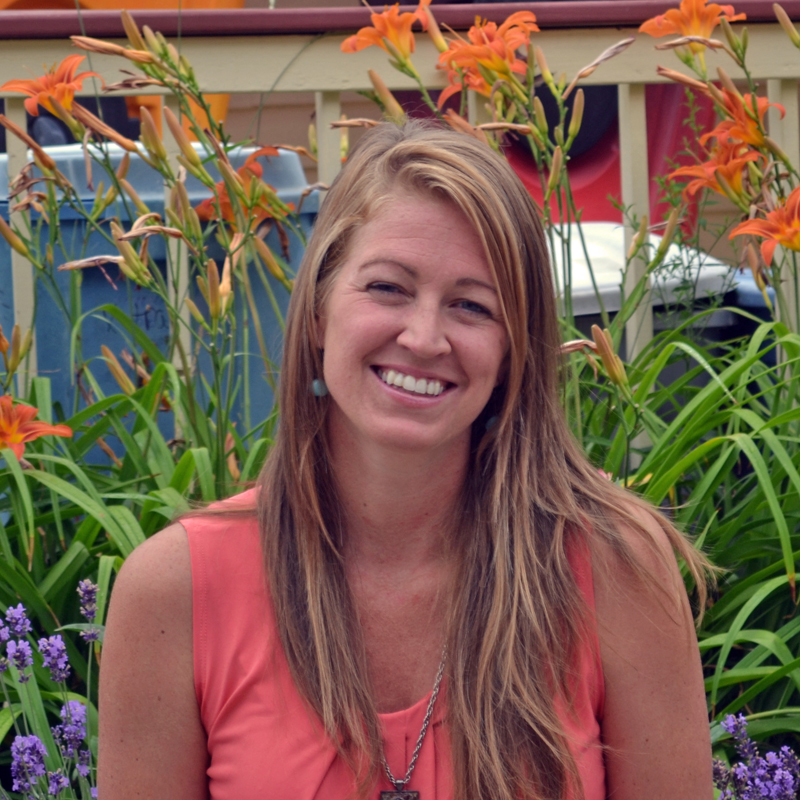 Mindfulness, resiliency, and self-esteem gained through immersion in the outdoors are the core principles of Hearty Roots, a new nonprofit that is offering weeklong camp programs for preteen girls at various sites in Lincoln County this summer.

The camp blends outdoor recreation, such as kayaking, paddleboarding, and hiking, with mindfulness-based practices, such as yoga and meditation, Hearty Roots founder Haley Bezon, of Bristol, said. The goal is to instill a lasting skill set that will enable campers to “handle and bounce back from adversity,” she said.

The camp is the culmination of Bezon’s early career working at a therapeutic wilderness program in Alaska’s backcountry and her current career as a counselor at Edgecomb Eddy School, she said.

The preteen years are typically an awkward and uncomfortable time for girls, as they deal with changing bodies and increased social pressure, Bezon said. Studies have indicated that girls’ self-esteem peaks at 9 or 10, but plummets between the ages of 13 and 15, she said.

The camp activities at Heart Roots are designed to foster the confidence, healthy decision-making skills, and mind-body connection that will enable girls to transform those years into “a joyful experience,” Bezon said.

“The goal is for girls to not spend their preteen years just hoping it will get better, but to really thrive and love themselves inside and out,” Bezon said. 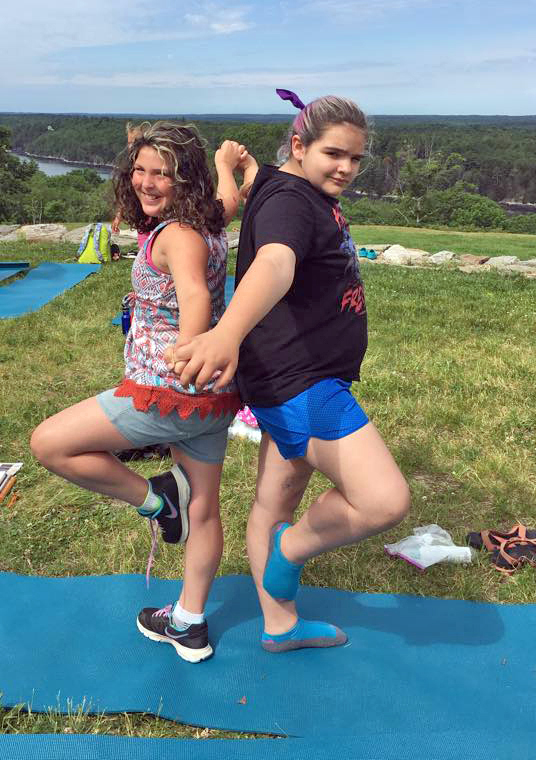 In May, Hearty Roots became a nonprofit and organized its pilot season as a day camp, which ends with an overnight campout for older girls, Bezon said. The first two camp sessions, for girls ages 10 and up, were held at the Hidden Valley Nature Center in Jefferson and the Deck House School in Edgecomb.

Prior to pursuing her master’s degree in education and youth counseling, Bezon worked for Alaska Crossing, a therapeutic wilderness program for at-risk youth, where she led extended backpacking trips.

The interaction with nature sparked a sense of resiliency in struggling youth, Bezon said. They were able to reflect on their experiences and get in touch with themselves in ways not possible in a traditional “brick-and-mortar rehab,” she said.

While the student population at Edgecomb Eddy School is different, the positive impact of nature has been apparent in her work there as well, Bezon said. “There is a significant difference when I lead classes outside, even if the class has nothing to do with the outdoors,” she said.

With nature as the backdrop, “kids engage on a different level,” Bezon said. “There’s a deeper level of communication, empathy, and connection to each other.”

In the preteen and teenager years, students tend to “put all their eggs in one basket” and have a hard time seeing beyond the social hierarchy and pressures of middle and high school, Bezon said.

Through interacting with the outdoors, however, students are able to broaden their understanding of the world and their place in it, Bezon said. Hearty Roots was established to connect youth to the outdoors and promote the self-discovery that results, she said.

Bezon contacted area schools to encourage students who are struggling to apply before opening enrollment to everyone, she said. The mix of participants in the outdoor environment created a “whole new dynamic” that might not have been possible to create in school, Bezon said.

Regardless of the differences in their backgrounds, when girls come to Hearty Roots, “they’re at camp,” Bezon said. “There is no baggage, there are no cellphones. They are just being their real, authentic selves. It’s made for some really special connections.” 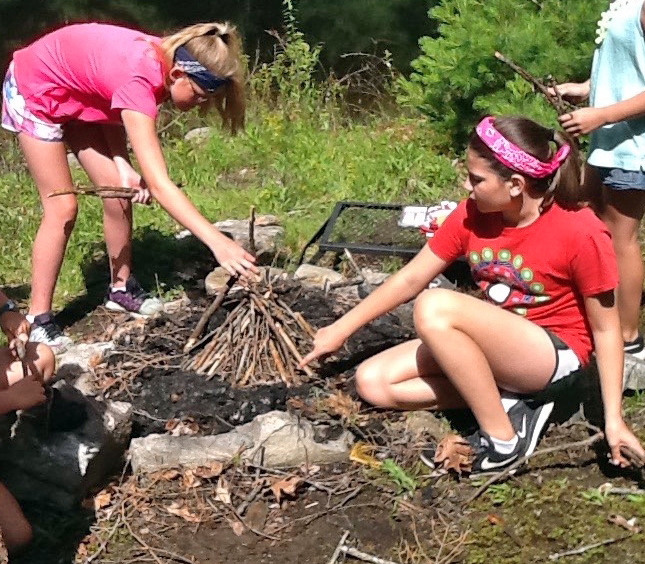 Dez Orne (left) and Kate Murphy learn to build a fire during a Hearty Roots session at the Deck House School in Edgecomb in June. (Photo courtesy Hearty Roots)

The camp invites outside instructors to teach classes, which included Zumba and Nia, a mindfulness-based dance class, in the first two sessions. At the end of each day, campers reflect on the rose, bud, and thorn of their experience – the worst and best parts of their day, in addition to something they are looking forward to.

At the end of each session, participants perform their own yoga routine, which they work together to choreograph throughout the week. For girls ages 10 and up, the program ends with an overnight campout. Some girls had never slept in a tent before coming to Hearty Roots, Bezon said.

In each session, girls have done something they have never done before. “They’re getting on the edge of their comfort zone and trying new things,” Bezon said, and their confidence has increased as a result.

Alanna Collins participated in the Hearty Roots session at HVNC. Riding a fat-tire bike was one of her favorite activities. The camp “inspired me to be a better person and become more active,” she said. “I also learned that I should be happy with myself and my body.”

Girls are given an “after-camp program” at the end of each session with suggestions for how to continue to engage in healthy activities. They are encouraged to apply the skills they have developed to their everyday life.

The cost of the camp is $150-$225 depending on the session, but scholarships are available. Bezon hopes to find additional funding sources for Hearty Roots, so there is no financial barrier to participation.

The pilot season of Hearty Roots is helping to shape the organization’s future. There are several directions the nonprofit could go, Bezon said.

Expanding programs to boys and girls; organizing longer wilderness programs, such as a weeklong backpacking trip; and organizing nature-based yoga retreats for youth are just a few of the ideas on the horizon, Bezon said.

“If I could figure out the funding, (Hearty Roots) is ready to take off and make a positive impact on a lot of lives,” Bezon said.

For more information about Hearty Roots, contact Haley Bezon at rootshearty@gmail.com or go to facebook.com/heartyrootsinc.