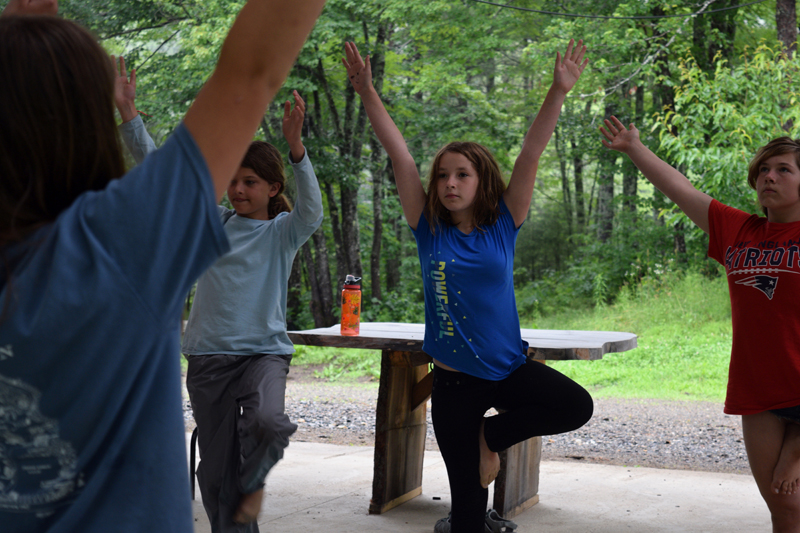 Under an open-air barn with water dripping from its eaves, a group of 10 girls share their experiences after a week of camp programs with Hearty Roots.

Hearty Roots, a nonprofit founded by Haley Bezon, a counselor at Edgecomb Eddy School, meshes a week of outdoor activities, such as cross-country skiing and paddleboarding, with mindfulness-based practices, such as journaling and yoga. The camp seeks to build resilience and self-esteem in preteen girls and boys.

According to Ali Stevenson, a member of the Hearty Roots Board of Directors, most participants are on the adverse childhood experience scale and are on full scholarship.

The camp currently has sessions in February and April, as well as five in the summer. With an average of 10 people per camp, Bezon reaches about 70 campers a year.

However, since the nonprofit launched in summer 2017, the number of camp sessions has grown due to demand.

Now the summer and winter camps will expand into a year-round experience for some campers with an after-school club.

“It will be pretty targeted for who we would really like to continue to work with, who would definitely benefit from some more mentorship and time outdoors,” Bezon said.

“I’ll take a look at the collective list of all the kids that we’ve worked with all summer long, and then we’ll invite specific kids who live in the same area, who live near some of the preserves that we’d like to explore with them, to attend that club,” she said.

The group of about three or four preteens in the club will be the same throughout the 12-week mentorship club. The club will meet from September to December.

Bezon will meet with club members once a week at a local preserve or body of water for about three hours each time, to continue both outdoor activities and mindfulness practices.

The dozens of campers this summer give Bezon plenty of candidates.  Some of those campers return time and again for another dose of nature and confidence-building.

Mira Hartman just completed her fifth session with the camp.

“For me, I have already learned the classic tools that Hearty Roots is so talented at teaching. I’m not complaining though,” Hartman said at the closing circle in Jefferson. “Even though camp may not be as much of a school anymore, it’s still a great resource, and I still use each and every one of the tools I’ve learned here.”

Other campers come once, and Bezon wants to find ways to reinforce the skills they learn.

“I know she gained a lot, but how can we continue to reinforce the skills that have been gained for kids who might not be going back and getting the kind of support and encouragement they need to continue?” Bezon said.

The club will have a sliding scale of fees, up to $200, Bezon said. As with camp sessions, scholarships will be available to lessen the cost.

Another after-school club will start up in the spring.

In the beginning, there will be a girls club. Later, Bezon will gauge interest in starting a boys club.

In addition to the club, Hearty Roots will soon hold its first “mini expedition” on Hog Island in Bremen for girls ages 12-14, who have aged out of the regular sessions.

Hog Island, in Muscongus Bay, is owned by the National Audubon Society.

Instead of the regular camp sessions, which last four days with one overnight, this trip will be for four days and three nights.

According to the Hearty Roots website, the session is meant for girls who are “ready for more of a challenge and longer camping trip.”

This extended trip will have “all the same nuts and bolts” as the regular sessions, Bezon said.

There will be about a 50-50 split between camp activities and mindfulness practices, “with nature as the backdrop for these lessons,” Bezon said.

Campers will learn tools to handle stressful situations and learn to be vulnerable with others.

“We spend a lot of time fostering the right culture for girls to be able to be vulnerable,” Bezon said.

As at the other camps, Bezon said, “We’ll island-hop around” and move to various public spaces.

“I don’t want to have a campground because I want to show kids places that they can go back to next weekend with their family, and introduce them to outdoor sports,” Bezon said.

Other camp locations this summer include Biscay Pond and Damariscotta Lake, where the campers visit the Spectacle Islands.

A closing circle will also end the extended trip. Parents are invited to attend this final activity of camp, which includes a rehearsed yoga routine, campers reading a note about their experience, words of affirmation given out to each camper by another, and a charm bracelet gifted to each camper by counselors.

The activity not only ties a bow on the camp session, but motivates Bezon to continue making Hearty Roots possible.

“Hearing these girls talk about loving themselves and preserving and having resilience every closing circle just (gives me) the motivation I need to keep going and doing the best I can to help this grow sustainably so that we can continue to make this kind of impact,” she said.

“Without that money, it wouldn’t be possible to run this programming and to have it affordable and accessible for our local families,” Bezon said.