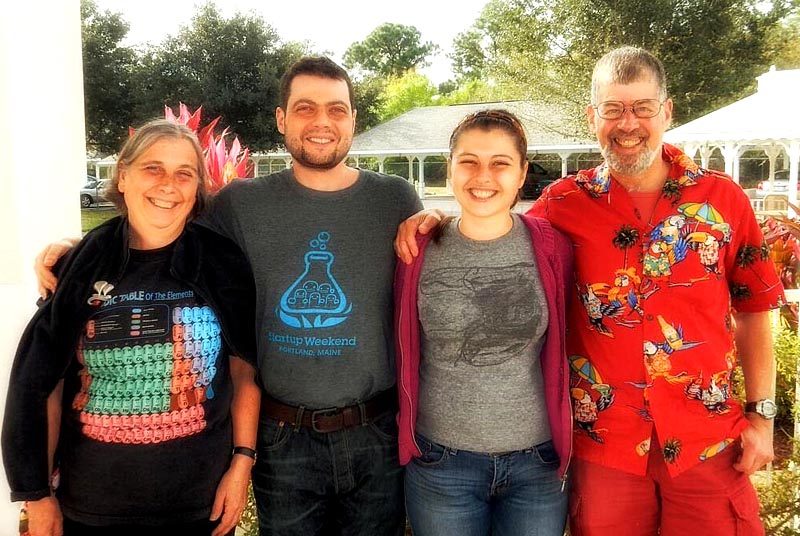 From left: Dr. Carol Eckert with Sam, Hannah, and Jeff Frankel on a family vacation in Florida in January 2015. (Photo courtesy Jeff Frankel)

The afternoon of Monday, Oct. 10, Dr. Carol Eckert went on a bike ride through her Windsor neighborhood. It was a typical activity for a woman whose daily routine included providing quality health care to those in need; working to make health care affordable; serving on state, local, and community organizations; immersing herself in nature through hiking, biking, skiing, camping, or gardening; and caring for her family.

Eckert never returned. The former Sheepscot Valley Health Center family practitioner died three days later, on her 63rd birthday, from injuries sustained when she was hit by a pickup truck.

The Windsor Volunteer Fire Department was filled to capacity Saturday, Oct. 22 for a memorial service for Eckert organized by Windsor town officials. “Carol Anne Eckert” was displayed on the digital sign in front of the Windsor Elementary School visible to all drivers on Route 32.

In a line that stretched to the back of the fire station, colleagues, former patients, community members, and friends waited to greet Eckert’s family and share stories of how Eckert had touched their lives.

There was a theme in the flood of comments, husband Jeff Frankel said. Many people have expressed how devoted and caring she was as a physician; how kind, wise, and giving she was as a friend; and how important she was to the community.

“It’s gratifying to see so many people here to celebrate her life and honor her name,” Jeff said to the crowd Oct. 22. “My heart was ripped right out of me. All of you are helping to put it back a little bit.”

Eckert spent her whole life giving to others, Jeff said. It was part of her “innate goodness” and “magnetic north,” he said – helping others was what she was put on the earth to do.

“I feel that she was cheated,” he said, when speaking about the couple’s retirement plans. However, as far as the driver of the pickup truck, “she wouldn’t want his life to be ruined,” said Sam Frankel, Eckert’s son. “She didn’t have that sense of retribution.”

The surprise birthday trip Jeff and Sam had planned for Eckert or the second cross-country trip the couple had planned to take were not meant to be, Jeff said. A solace is that he was able to spend nearly 50 years of his life with Carol, he said.

“I have no doubt that her last thoughts were of Sam, Hannah, and me,” Jeff said, referring to their children.

Jeff and Carol met when they were teenagers living about 20 miles apart in New Jersey. Jeff was introduced to “a winsome clarinetist” with “a lively mind” when both performed in a community band. Their first date was Dec. 7, 1968, Jeff said.

The couple stayed together as they earned their bachelor’s degrees, moved to the Bronx so Eckert could attend medical school and Jeff law school, and moved to Maine so Eckert could complete her residency through the Maine-Dartmouth Family Practice Residency program in Augusta.

Eckert gravitated toward family practice because it allowed her to take a holistic approach and treat the whole patient, Jeff said.

1982 was a big year for the couple, Jeff said. Eckert completed her residency and began work at the Sheepscot Valley Health Center in Coopers Mills, they bought their house in Windsor, and they had their first child, Sam, followed a few years later by Hannah.

Eckert would remain at the Sheepscot Valley Health Center, which provides health care to individuals regardless of their ability to pay, for the next 30 years. She helped build and expand the center “and always did more than her share,” said her longtime partner, Dr. Roy Miller.

“She treated every patient like they were the most important patient,” Miller said.

Carol delivered hundreds of babies throughout her career, something she loved, Jeff said. Each baby was special for her, he said. 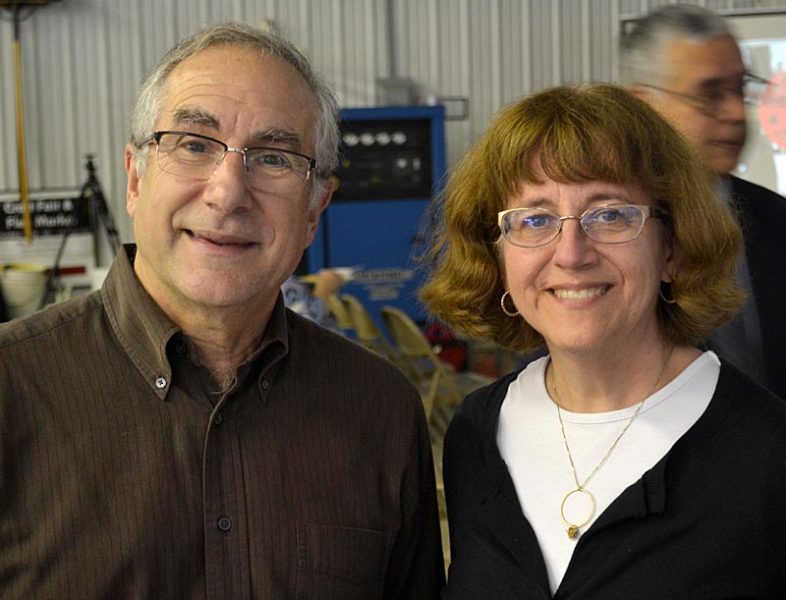 “She was the smartest doctor I know,” Miller said, citing her strong scientific and analytic mind. Eckert was one of the few doctors who would not prescribe opioid medications unless it was an absolute necessity, Miller said. “She realized it was a mistake,” he said.

The work of a doctor is grueling, “but she kept her medical humanity,” Jeff said. “She loved her patients; she loved what she was doing. Helping others made her happy.”

After a full day’s work, Eckert would volunteer at health clinics run by the Maine Migrant Health Program, or serve as medical director for the Maine Community Accountable Care Organization, or work as a medical consultant for Social Security Disability Services.

She also served on the Windsor School Committee, and was a 30-year member of the Maine Pesticides Control Board, a role Eckert accepted because of her interest in agriculture and occupational health, Sam said.

Nearly every staff member the Sheepscot Valley Health Center has ever had was present at the service, Miller said. Colleagues from HealthReach, the Maine Migrant Health Program, and the numerous boards, committees, and organizations Eckert served on through the years also turned out in force. 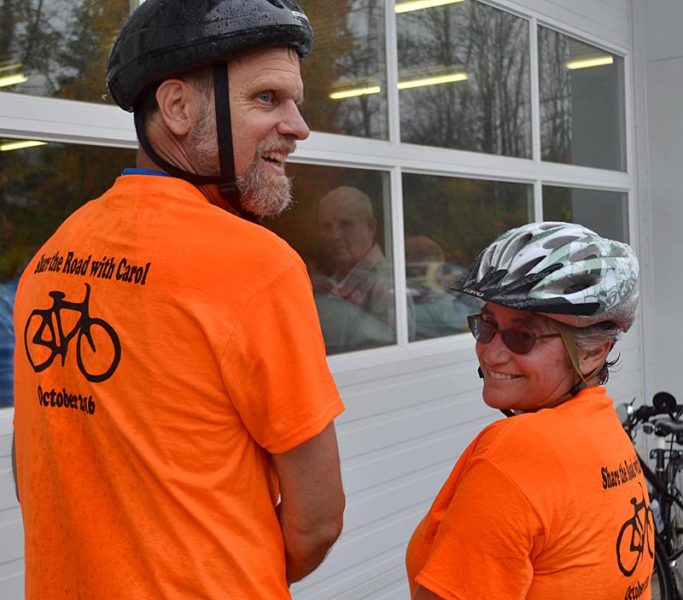 Wearing orange T-shirts that said “share the road with Carol,” Tom Bartol and Barbara Moss, Eckert’s co-workers and friends, biked through the rain to the memorial service from the location of Eckert’s residency in Augusta, a memorial ride they plan to hold again, they said.

A bike ride in the rain was something Carol would have approved of, Moss said. “I can just see her with that smile,” Moss said.

Eckert’s smile was iconic; it emitted pure joy, those who knew her said. Eckert wanted her patients to have a full, healthy life, which was something she modeled in her own lifestyle, Jeff said.

Eckert loved nature and the outdoors, her family said, whether on skis, snowshoes, hiking, or camping. One of her goals in retirement was to become a master naturalist, Jeff said.

Judi Ekholm, a longtime friend who taught yoga with Eckert, performed at her memorial service. “The Wedding Song” was requested by Jeff, Ekholm said, because it was played at their wedding.

Ekholm changed the lyrics of the other song she performed, “Give yourself to love,” specifically for Carol, to reflect Carol’s permanent presence in the natural world that she loved so much, Ekholm said.

Of all the activities Eckert routinely engaged in, she loved to bike,
Jeff said. She became a community character due to her daily bike rides through Whitefield and Windsor, he said.

Biking allowed Eckert to be outside and feel like she was a part of the natural world, while still moving fast enough to feel adventure, Hannah said.

Eckert connected with a part of herself through those rides that people sometimes lose in the pressures of daily life, Jeff said.

Carol introduced Miller’s son Nathan to biking when he was a child. “She planted a seed in me,” said Nathan Miller, who is now an avid bicyclist.

Eckert’s family chose the Maine Bicycle Coalition of Maine as the charity to encourage donations to in lieu of flowers. Carol was a member of the coalition, which works with state and local governments to create bike-friendly roadways.

About $1,300 was raised at the memorial service, and more donations were made directly to the organization, Jeff said. It is one of the ways Eckert is continuing to give, even after death, he said.

An organ donor, Eckert was able to give her corneas to two individuals after she passed away. “That gives me so much solace. Because of her death, two other people can see,” Jeff said.

Eckert was a unique and wonderful mother, Sam and Hannah said – from the food she cooked to the Halloween costumes she handmade to the love of the outdoors and the sense of exploration and adventure she shared with them.

Hannah said she was a unique mother because she encouraged her to take risks and not compromise her identity to fit in with a social group. Eckert was concerned when Hannah stopped dressing weird, not when she started, Hannah said.

Eckert’s death was sudden, unexpected, and tragic, family and friends said. “But she was here for 63 years, and we got more of her time and love than anyone else,” Hannah said.

Many families who lose someone oftentimes feel regret because of an unresolved conflict, or feelings they wish they had been able to share, Hannah said. That is not the case for Jeff, Sam, and Hannah Frankel. “There was nothing left unsaid,” Jeff said.