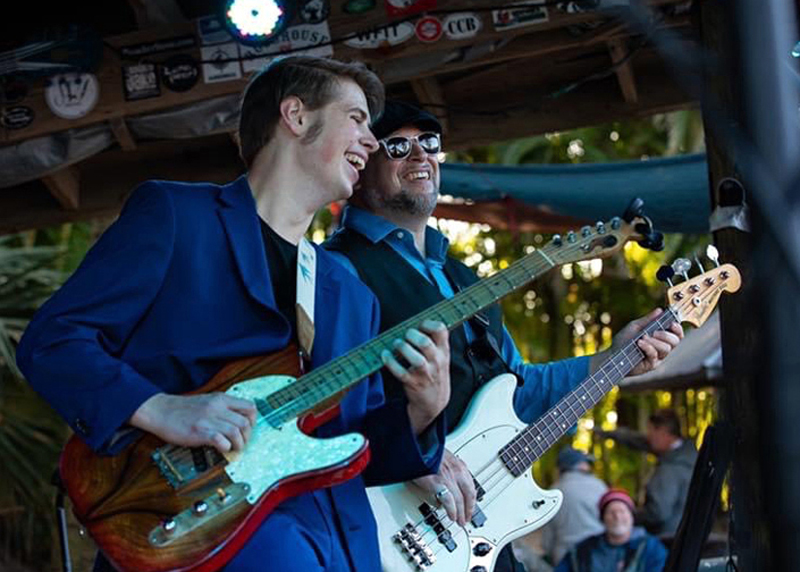 Memphis Lightning, a high-octane blues act praised by Buddy Guy and Jimmie Vaughn, will kick off Lincoln County Television’s summer concert series at the Lakehurst Lodge in Damariscotta at 6:30 p.m. on Thursday, July 1.

The group is a blues trio that consists of two permanent members — Topsham native and Naples, Fla.-based guitarist Darren “Lightning” Thiboutot Jr. and his father, bassist Darren “Big Red” Thiboutot — and a drummer. Drummer Steve “Light Fingers” Reny is touring with the group for its current stretch of New England shows.

Lightning reminisced about the experience of jamming onstage with Guy in 2016 at the Capital Theatre for the Arts in Concord, N.H. during an interview with Lincoln County Television on Tuesday, June 1.

“He told me that I reminded him of his heroes, the guys that he wanted to be when he was younger,” Lightning said.

He said his only regret is that he declined to share a bottle of wine with the blues legend, as he wasn’t old enough at the time.

In a YouTube video of the jam, Lightning’s fingers fly seemingly effortlessly along the fretboard to create a jumping and melodious jam during the song “Drowning on Dry Land.” But the eclectic guitar playing is not effortless and is actually the byproduct of years of hard work and fighting through adversity.

During the concert, Lightning was in the middle of undergoing chemotherapy for a cancer that was discovered in his neck the day before his senior prom at Cheverus High School. He overcame the disease and now has been cancer-free for four years and is simply ecstatic and grateful that he gets to play the music he loves alongside his father in front of eager audiences across the country.

“It’s the coolest feeling in the world to walk into a place you’ve never been and have people come up and go, ‘I love you guys!’” Lightning said.

The music he has been listening to and playing since he was young gave him the strength to remain hopeful and overcome the disease.

“If it wasn’t for the fact that I could play, I wouldn’t be here,” Lightning said.

Both Lightning and Big Red expressed a true appreciation for the crowds that make it possible to continue to share their music with the world.

“Any time we get a chance to play and share our music with the world is a great day,” Lightning said.

Lightning has been playing guitar since he was 8 years old, when his father taught him all that he learned from bluesman Eddie Kirkland and his band, whom he was playing with at the time.

“I was very fortunate to play with these guys, learn from them. And then in turn hand that off to Darren,” Big Red said.

Big Red and Lightning said it is extremely hard work writing songs, making music, practicing, and playing that music for live crowds night after night, but the payoff is tremendous.

“It shows all the hard work every day. If we’re not playing, we’re practicing. We’re just trying to better ourselves in everyday life,” Lightning said.

Big Red said he learned the value of hard work and perseverance from Kirkland, a blues guitarist who played with John Lee Hooker and Otis Redding.

“I watched that man every night get on stage, times he shouldn’t have been able to get on stage, physically, and sing and play every note like it was the last note he was ever going to do,” Big Red said.

The night his son was born, Big Red was in San Francisco playing a show with Kirkland. It was 106 degrees and he learned that his wife was in labor on the other side of the country. He said Kirkland sat up all night with him with a Bible, playing gospel songs to ease his mind.

Twelve years later, Lightning had the opportunity to join his father and Kirkland onstage for the last performance Big Red played with Kirkland.

After a relatively off year in 2020 because of COVID-19, only playing about 100 shows, Big Red and Lightning spent their time practicing and writing over 1,800 original songs that they are eager to show with audiences.

“Every single song has a story and a meaning behind it,” Lightning said.

Lakehurst Lodge is located at 30 Lakehurst Lane, off Egypt Road in Damariscotta, with plentiful parking.

The LCTV summer concert series will continue with three shows directed by Bob Colwell and friends from Hallowell: Aug. 5 (Woodstock revisited), Sept. 2 (Springsteen tribute), and, closing the season on Sept. 30, the music of the Rolling Stones.