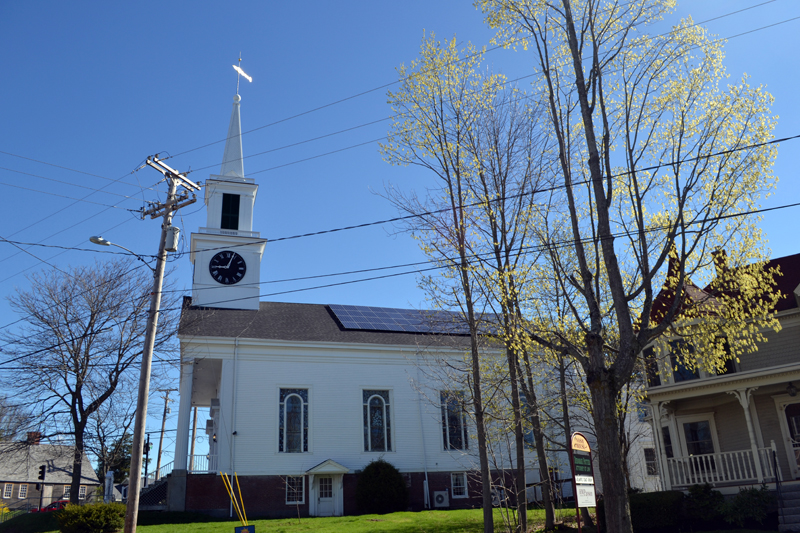 The Damariscotta Baptist Church recently completed the installation of 56 solar panels on the south side of the church roof, facing Bristol Road. (Maia Zewert photo)

A project more than 2 1/2 years in the making, the Damariscotta Baptist Church’s solar energy system is up and running as of Monday, May 1.

ReVision Energy recently completed the installation of 56 solar panels on the south side of the church’s roof. The system will provide the church’s electricity supply and will enable a transition from heating oil to electric heat pumps by the end of the year.

As an avid reader of Paul Kando’s “Energy Matters” column in The Lincoln County News, Damariscotta Baptist Church Pastor Marilee Harris said she had been interested in learning how the church could reduce its carbon footprint and energy costs for quite some time.

“In this building, our biggest expense is the fossil fuel we use to heat the building,” Harris said. “The sanctuary is only heated once a week, but the rest of the building is heated throughout the week.”

Kando is the co-founder of the Midcoast Green Collaborative, a nonprofit that promotes environmental protection and economic development through energy conservation. The nonprofit meets in the Damariscotta Baptist Church.

In lieu of payment to rent space in the building, Harris asked if the Midcoast Green Collaborative would perform an energy audit and make recommendations for how the church could reduce its dependence on fossil fuel. The collaborative agreed, and later recommended installing heat pumps and exploring the possibility of putting solar panels on the roof.

The church started conversations with Jennifer Albee and James Manzer, of ReVision Energy, about the details of installing a solar energy system on the roof, Harris said.

ReVision, with offices in Liberty and Portland, as well as Massachusetts and New Hampshire, has installed notable solar energy projects in Lincoln County, including community solar farms in Edgecomb and on The Morris Farm in Wiscasset.

The Damariscotta Baptist Church recently completed the installation of 56 solar panels on the south side of the church roof, facing Bristol Road. (Maia Zewert photo)

“We knew ReVision had worked on other projects in the area, and we were really impressed with what they’ve done. They were wonderful to work with,” Harris said.

Informational meetings were held with the congregation to gauge support for the installation, Harris said. In October 2016, the church voted in favor of the project.

Before installation could begin, improvements needed to be made to the roof, which is more than 50 years old. Harris said the church spent $16,000 to shingle and rebuild the south side of the roof, where ReVision would install the panels.

ReVision originally planned to install the panels in February, but snowstorms delayed the installation. ReVision’s schedule was full for the next several weeks, so the Damariscotta Baptist Church installation was delayed until the middle of April.

The installation of the panels took about a week. The panels were turned on Monday, May 1. The church did not have electricity Monday morning to allow for the switch to happen.

Once ReVision employees completed the necessary finishing touches, Harris and Chris Trembly, a project manager for ReVision, flipped the switch at 11 a.m. Monday.

In its first year, the 56-panel system is expected to generate more than 20,000 kilowatt hours of electricity for the church and the parsonage – the pastor’s residence on Main Street.

The installation cost ReVision approximately $56,000, Harris said. In seven years, if the church chooses to buy the system, the cost will be close to $27,000. The church could also choose to continue to buy power from ReVision.

Over the next seven years, the church plans to save $4,000 every year toward the purchase of the panels, approximately the same amount it would have spent paying for fossil fuels, Harris said.

“In a way, we’re not saving any money from what we were spending before, but we’re investing in our building,” Harris said. “Once the system is purchased, then the electricity is essentially free.”

The church has taken additional steps to make the building more energy efficient, including improving insulation. The building has two heat pumps and there are plans to purchase a third by winter, Harris said. The church hopes to eliminate its use of fossil fuels by the end of the year, save for any emergency situations.

“We want to be good stewards of the earth, and getting off fossil fuels is one of the ways in which we have done that,” Harris said. “We all need to take control of our energy use.”

In addition to support from the congregation, the installation has also been met with positive reactions from the neighborhood, Harris said.

“It’s encouraging to see our neighbors be so excited that this has happened,” Harris said.