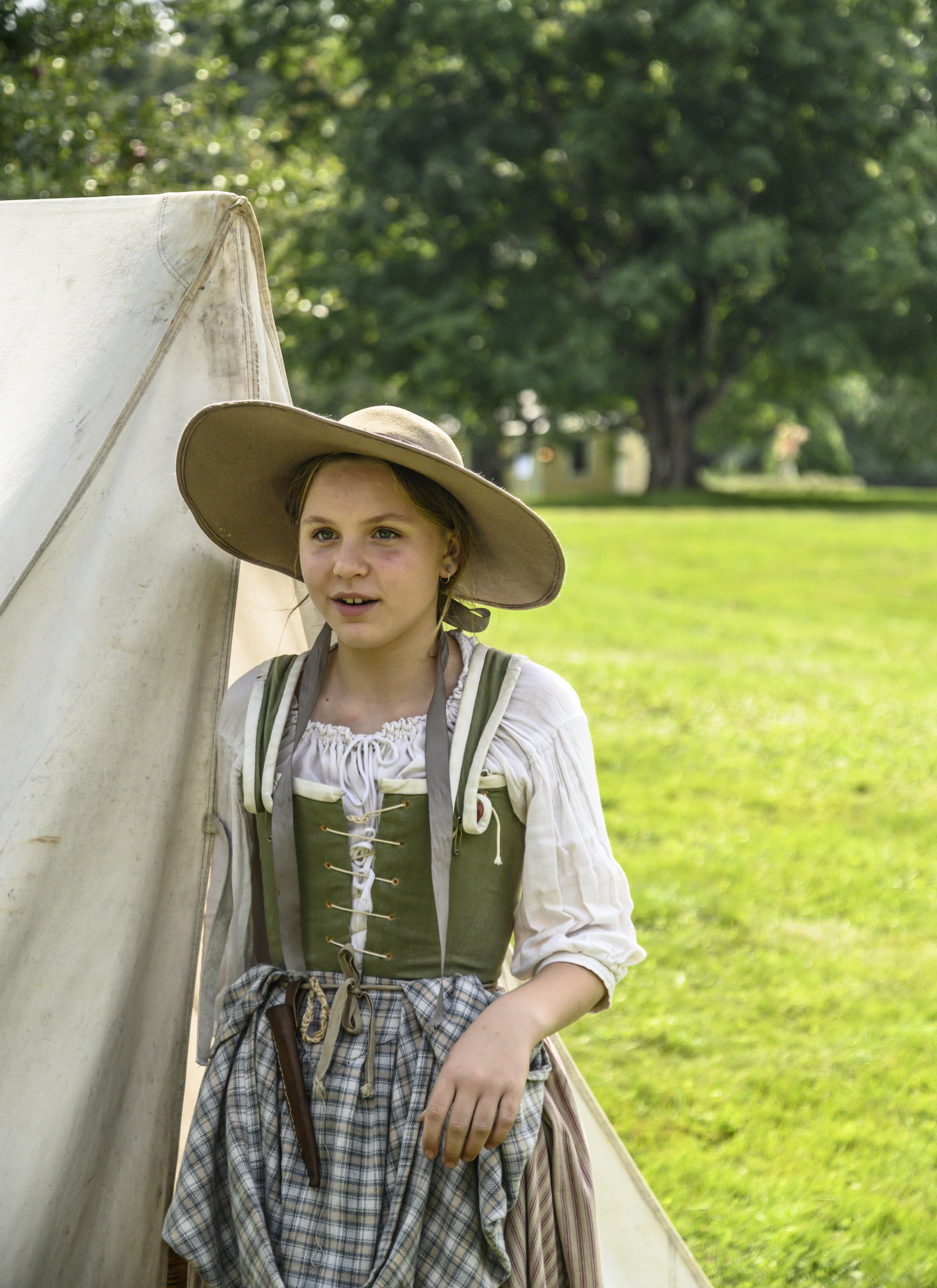 Addie Miller, 12, guards a tent on the grounds of the Bowman House in Dresden on Sunday, Aug. 22. Miller said the tent had “implements of witchcraft” within, referring to modern day items that were kept inside the tent in order to prevent anachronisms from spoiling the effect of the period clothes and equipment on display. (Bisi Cameron Yee photo)

Lincoln County celebrated the state of Maine’s delayed bicentennial over the course of nine days from Aug. 15-22. The Bicentennial Plus One Pilgrimage featured artifacts, architecture, and activities across 16 historic sites in eight towns.

South Bristol had six sites participating in the pilgrimage, four of them open to visitors and two as drive-by examples of the town’s history. Members of the historical society were on hand to regale visitors with the stories behind the artifacts that touched on the fishing, boating and tourist industries.

In Southport the Hendrick’s Hill Museum showcased a house full of antique maps, furniture, linens, dishware, art, and decorative items. The large boathouse on the property houses several boats, as well as the counter from the E. W. Pratt General Store, a central gathering place in the town since 1948.

In Dresden, an array of 21st-century hobbyists in 18th-century garb set up tents on the grounds of the Bowman House and demonstrated historic crafts and skills, including rope making, knot tying, the art of navigation and the manufacture of rigging for ships.

Jim Nelson started a career as a TV director, decided that job wasn’t for him, and “ran away to sea,” he said. Now he works for Maine’s First Ship in Bath on reconstructing historic ships like the Virginia, a pinnace built in 1607 near the mouth of the Kennebec River by the Popham Colony.

Charlie McCue fell in love with history during an earlier bicentennial when the United States turned 200 in 1976. He’s made a study of local history for over 50 years.

Jeff Miller educated visitors on the differences between a quadrant, sextant, and octant and how each one evolved from the need for more precise navigation.

Judy Wasson said she began her involvement in living history demonstrations 15 years ago with an Edwardian shooting club. She said that there are many groups that specialize in one period of history, but she decided, “That’s no fun… we wanted to do everything,” and set about putting together clothing and kits for multiple historic timeframes.

Reb Manthey, who demonstrated spinning techniques, said “You can go as far with this hobby as you like and pick out the details you like.”

The Bowman House, which finally opened to the public this year also offered free tours of the downstairs rooms, all restored to recreate the fine Boston-inspired interior that Judge Jonathan Bowman built in 1762.

Organized by the Lincoln County Historical Society using funds from a grant from the Maine Bicentennial Commission, the pilgrimage gave residents and visitors alike a chance to turn back time, to learn how our ancestors lived, and to find out how, so many years  ago, they were able to place themselves on the ocean within a mile of their actual location or craft rigging that would stand up to the savagery of the seas.

While the official pilgrimage is over, the historic sites and the dedicated volunteers who help preserve them are still around, and there are several months left in this bicentennial plus one year.

For more information on all the pilgrimage sites , go to .lincolncounty2020.com. Contact the sites directly for additional information and updated hours.