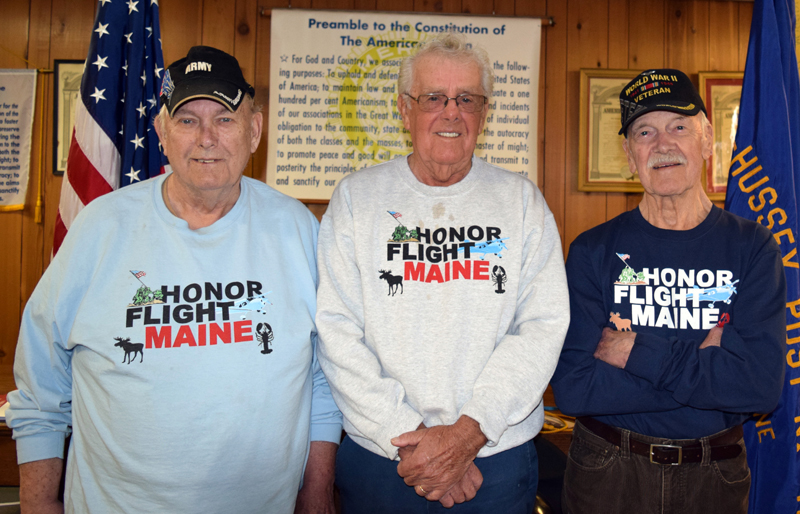 From left: Stanley Wall, Allan Benner, and Ralph Moxcey at the American Legion in Damariscotta on Thursday, April 13. The three local veterans, along with a fourth, Ray Alden, recently participated in an Honor Flight to Washington, D.C. (J.W. Oliver photo)

Four Lincoln County veterans recently participated in an Honor Flight to Washington, D.C., where they were moved by their trips to veterans memorials and by the gratitude and respect they encountered from thousands of strangers.

Honor Flight Maine organizes and funds the trips. The nonprofit organization exists “solely to honor America’s veterans for all their service and sacrifices,” according to honorflightmaine.org.

Benner, 87, of Waldoboro, was in the Army from 1948-1954. He was a wire chief and worked with Nike surface-to-air missiles, serving in Japan and Texas.

Stanley Wall, 69, of Bristol, was in the Army from 1966-1968. He was a truck driver, ditch-digger, and pipe-layer during his service in Germany and Libya.

All four belong to The American Legion Wells-Hussey Post No. 42 in Damariscotta.

Many Honor Flight participants travel with companions the organization refers to as guardians, often other veterans. Wall was Benner’s guardian for the trip. Alden was Moxcey’s.

The local veterans, as part of a group of 45 veterans and their guardians, departed the Portland International Jetport on Friday, March 31.

A large crowd met the group at the airport in Maryland, shaking the veterans’ hands and parting to usher the group through the airport. A police escort accompanied the group’s bus from Maryland into D.C. and from stop to stop the rest of the trip.

The veterans visited Fort McHenry in Baltimore, where Francis Scott Key penned “The Star-Spangled Banner,” before going on to the veterans memorials.

The group visited the World War II, Korean War, and Vietnam War memorials; the Air Force, Marine Corps, and Navy memorials; the Women in Military Service for America Memorial; and Arlington Cemetery, where they visited the Tomb of the Unknown Soldier and watched the changing of the guard, one of the highlights of the trip for the local men.

But perhaps the most memorable and gratifying part of the trip for all four men was the reception, both from the crowds at the airports and strangers on the street in D.C., which was full of tourists in town to see the cherry blossoms.

“They all came up to you and shook your hand and said ‘Thank you for your service,’” Benner said. “I didn’t know there were so many patriotic people in the United States.”

Moxcey was nearly overcome by emotion while relaying an encounter with a group of children in Washington.

A couple of little girls came up to him, shook his hand, and thanked him. “And then they said, ‘Can we hug you?” and I said, ‘Yes, please!’ I hugged these two little girls and before I knew it I had six or seven kids around me wanting hugs, and it was just the most touching experience,” he said. “It was just unbelievable – still touches me.”

For Wall, a Vietnam-era veteran, the reception was particularly poignant. Although he did not experience it firsthand, protesters of the Vietnam War called soldiers baby-killers and spit on them when they returned.

“There wasn’t anybody to say thank you for your service or anything,” he said.

“Things have changed a lot” in the years since the war, Wall said. Now, every once in a while a stranger spots his Army hat and thanks him for his service. But to experience the gratitude and respect of the crowds in Maryland and Portland was “unreal,” he said.

The local veterans enjoyed spending time with other veterans of the same eras, and said they immediately felt a bond with their fellow veterans.

Another highlight was “mail call,” just like in their military days. Each of the veterans received mail – much of it cards of thanks from students in their communities.

The group returned to Portland on Sunday, April 2.

Benner estimated that 1,000 or more people were present to welcome the group home. The Freeport Flag Ladies were there, a group of students saluted as the veterans arrived, and there were bagpipes, flags, and many people in uniform. The Red Barn, an Augusta restaurant, fed the group and plans to host a reunion this summer.

“It was quite amazing – brought tears to my eyes,” Moxcey said.

“Everybody should go on this Honor Flight,” Wall said.

Alden called it a “once in a lifetime” experience.

“It was something you won’t forget,” Moxcey said.