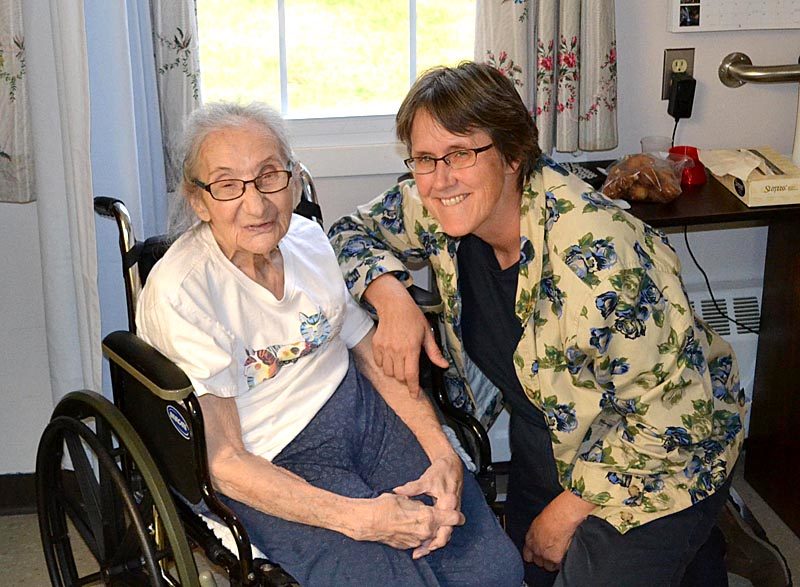 Sarah Cheiker (left) and her conservator, Linda Russell, in Cheiker’s room at the Fryeburg Health and Residential Care Center in Fryeburg on Oct. 13. Cheiker has lived at the nursing home as a MaineCare patient since she was defrauded of nearly $1 million and abandoned in a cabin in Edgecomb in 2011. (Abigail Adams photo)

The story of an elderly California woman who vanished from her home only to be found four years later, defrauded of her life savings and abandoned in a cabin in Edgecomb, made national headlines in 2011.

Since Sarah Cheiker, now 90, was found in a cabin at the Pine Crest Motor Court in July 2011, she has lived at the Fryeburg Health and Residential Care Center as a ward of the state of Maine.

The individuals responsible for defrauding Cheiker of nearly $1 million, transporting her across the country in a years-long road trip, and abandoning her in Edgecomb with instructions not to talk to anyone, are believed to have left the state.

Their current whereabouts are unknown, said Linda Russell, of Oxford Hills Law, who is Cheiker’s conservator, a type of guardian.

Nicholas and Barbara Davis, twins, now 46, and their godson, Jonathan Stevens, now 25, pleaded no contest to charges of endangerment of a dependent in 2012. Their prison sentences were suspended. They served probation, which has since ended.

Nicholas Davis paid Cheiker $5,000 in restitution and the three defendants paid a total of $60 in victim compensation fees.

Russell is now in search of Nicholas and Barbara Davis and Jonathan Stevens in an effort to seize property or assets that could enable Cheiker “to have a better life,” she said. Efforts to find current contact information and reach the Davises and Stevens for comment were unsuccessful by press time.

From left: Nicholas Davis, Barbara Davis, and Jonathan Stevens at the time of their arrest in 2011.

In an October interview, Cheiker said she wants to “be a person again” and live in a house with a mailbox, independently with some outside support. “It’s not important where I wind up just as long as I wind up in an address,” Cheiker said.

Sarah Cheiker was an elderly woman living alone in the Fairfax neighborhood of Los Angeles when she met Barbara and Nicholas Davis and Jonathan Stevens around 2005.

The Davises approached her about the possibility of buying her home, which she had previously shared with her only immediate family, her mother and brother, both deceased, according to the judgment in the civil case.

While Nicholas and Barbara Davis are twin siblings, according to the judgment, they introduced themselves to Cheiker as man and wife, Cheiker said.

It was one of several lies the Davises told Cheiker over the course of the next six years that manipulated her understanding of reality, Russell said.

While able to live independently at the time, Cheiker says she has always been able to hear voices. The Davises won Cheiker’s trust by telling her they knew her mother and that they talked to voices too, Cheiker said.

Nick, in particular, Cheiker felt close to, because they both talked to the same voice, she said. Cheiker pronounced the name of the voice she and Nicholas both talked to as “Monet.”

The voice’s true name, however, was spelled “m-o-n-e-y,” Cheiker said.

A neighbor reported the Davises and Stevens, a minor at the time, began to visit Cheiker almost daily around 2005, according to the judgment. “We mostly talked about the voices,” Cheiker said of her early encounters with the family.

Nicholas was a talented cook, Cheiker said. She began to invest regular payments of $1,000 in a restaurant Nick said he planned to open, she said. In December 2005, Nicholas Davis became the primary beneficiary of payments for investments Cheiker owned, according to the judgment.

In the span of one week, an attorney executed a living will and a trust for Cheiker, which named Nicholas Davis, either indirectly or directly, as the primary beneficiary of Cheiker’s assets upon her death, and as Cheiker’s primary decision-maker for the remainder of her life.

In November 2007, a fire broke out at Cheiker’s Los Angeles home while the Davises were visiting, according to the judgment. After the fire, the Davises took physical custody of Cheiker, moving her first into a motel then an apartment in Los Angeles.

When Cheiker was located and an investigation into the Davises was initiated, her cross-country journey began. “These steps were taken to hide Ms. Cheiker from an investigation started by the Adult Protective Services of California,” Clifford wrote in the civil judgment.

For the next three years, Cheiker traveled with the Davises and Stevens to several locations before arriving in Edgecomb. Cheiker does not remember all the stops. She did not have glasses and does not have a firm understanding of geography, she said.

According to Russell, the group is believed to have spent time in Washington, Arizona, and Nevada. Cheiker said she remembers spending a long time in Nevada.

The Davises told her she had inherited property in Nevada from a distant relative named Millie Grimes and they were all going to live there, Cheiker said.

Cheiker still references the property in Nevada and asks to return there, but the individual and the property the Davises told Cheiker about appear to have been fictitious, Russell said.

“They had a way of making things seem real,” Cheiker said. She said the Davises would point out people while they were driving, and those people waved to her. The Davises told her those waving people were her friends or her doctor to make it seem like people knew where she was and that she was being taken care of.

“It was pretty convincing,” Cheiker said.

According to Cheiker, she stayed at motels with the family on their trip across the country. Cheiker was always given “the best bed in the room” and was well-fed throughout the journey, she said.

The voice, “Monet” or “Money,” always backed Nick up and told her what was happening was OK, so she never really questioned it, Cheiker said.

When staff at a motel began to ask questions, they changed locations, Cheiker said.

The Davises took out four life insurance policies on Cheiker in 2010, according to the judgment.

In June 2011, Cheiker’s three-year road trip with the Davises and Jonathan Stevens ended in Edgecomb. Nicholas Davis and Jonathan Stevens dropped Cheiker off at the Pine Crest Motor Court. Stevens told the owner Cheiker was a middle-aged artist who liked to be left alone and instructed him not to disturb her, according to the judgment.

“I was being kept incognito,” Cheiker said. “I understood I was not supposed to talk to people.”

On July 11, 2011, after several attempts to make contact with the person inside the cabin, who would not open the door, employees of the Pine Crest Motor Court asked the Lincoln County Sheriff’s Office to conduct a welfare check.

The oldest trick in the book

Nicholas and Barbara Davis and Jonathan Stevens were arrested and charged with one count each of class C intentionally endangering the welfare of a dependent person, a felony, in Lincoln County Superior Court.

While allegations of financial exploitation were made by Cheiker throughout the criminal investigation conducted by the sheriff’s office, the criminal charges that could be filed in Lincoln County, due to jurisdiction, were limited to Cheiker’s abandonment, according to records from the criminal cases.

The FBI simultaneously conducted an investigation into the allegations of financial exploitation and kidnapping, Russell said.

In April 2012, Nicholas and Barbara Davis pleaded no contest to the felony charges. They were each sentenced to three years in prison, all suspended, with two years of probation. Nicholas Davis was ordered to pay Cheiker $5,000 in restitution.

Jonathan Stevens pleaded no contest to a reduced charge of class D endangering the welfare of a dependent person, a misdemeanor. He was sentenced to 364 days in prison, all suspended, with one year of probation.

Stevens’ request for early termination of probation was granted, but the Davises’ requests were denied, according to criminal court records. The Davises served the remainder of their probation, which ended in 2014, in Maine.

The FBI conducted a lengthy investigation into the Davises, but decided in 2015 not to file charges, in part due to concern about how Cheiker would perform as a witness, Russell said.

The elderly are often targets of financial scams. Among them is the fiduciary power of attorney scam, a scam in which a trusted relative or friend assumes responsibility for an elder’s financial affairs only to use the elder’s money for his or her own benefit, according to the National Adult Protective Services Association, a nonprofit devoted to improving the quality of services to elders who are victims of abuse or exploitation.

Since 2012, Russell has pursued a civil lawsuit against the Davises and Jonathan Stevens.

In 2015, after the Davises and Jonathan Stevens failed to appear for the trial, the Oxford County Superior Court issued a default judgment for $2,000,000 against them, for the liquidation of Cheiker’s financial assets, amounting to almost $1 million, and emotional distress.

“The story is one of shocking exploitation of an elderly person, with the defendants taking over Ms. Cheiker’s life and assets, kidnapping her, exploiting her, and abandoning her in squalor,” Clifford wrote in the judgment.

Since Cheiker was discovered in Edgecomb, she has lived as a MaineCare patient at the Fryeburg Health and Residential Care Center, Russell said.

Russell is now in search of the Davises and Stevens to collect on the judgment. “It would be wonderful to get some property and money for Sarah so she can have a better life,” Russell said. “She lost everything – her house, her sense of place, everything.”