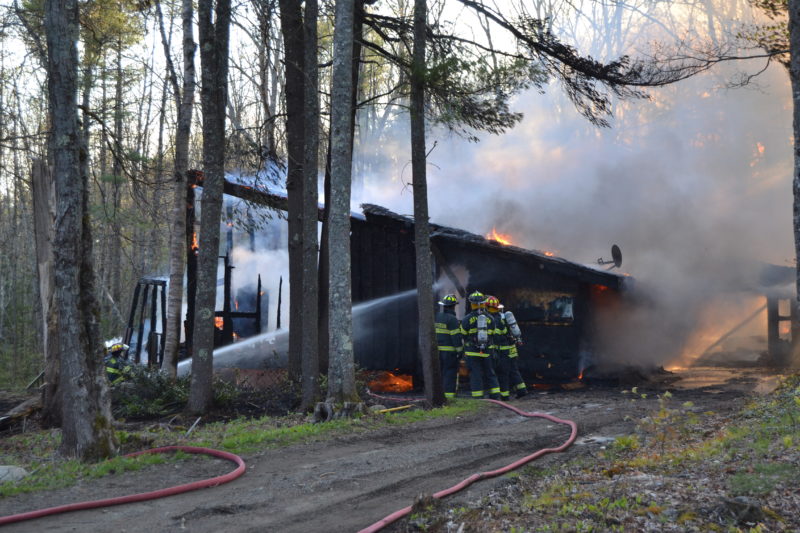 Firefighters work to extinguish a house fire at 421 Hilton Road in Whitefield the evening of Sunday, May 17. (Maia Zewert photo)

Fire destroyed a house at 421 Hilton Road in Whitefield the evening of Sunday, May 17. No one was home when the fire started and there were no injuries.

Lincoln County Communications dispatched the Whitefield Fire Department and Whitefield First Responders, as well as the Alna, Jefferson, and Somerville fire departments, at 6:27 p.m. for a building on fire.

Whitefield Fire Chief Scott Higgins said the house was engulfed in flames when he arrived. Firefighters began a defensive attack from the exterior.

At one point, the fire spread into the woods, Higgins said. Firefighters moved quickly to extinguish the woods fire while continuing to fight the house fire.

The departments set up a tanker relay to bring water to the scene from sources on Route 126 and Heath Road.

The house is on a narrow dirt road, “so we needed to figure out the logistics of getting the trucks out of there to the water supply,” Higgins said.

At about 10 p.m., Higgins called for an excavator to knock down the remnants of the structure so firefighters could extinguish remaining hot spots. Departments cleared the scene at about midnight, he said.

“It was a lengthy fire and about a six-hour process,” Higgins said.

The people who live in the house, which was insured, were out of the area when the fire took place, Higgins said. Richard Clifton Zoglio III owns the property, according to public records.

The Maine State Fire Marshal’s Office visited the scene Sunday evening and again Monday, May 18. Higgins said investigators have not determined the cause.

Higgins praised the responding fire departments and other emergency agencies for their efforts. In addition to the four Lincoln County fire departments, the Pittston, Washington, and Windsor departments responded from outside the county.

Delta Ambulance and the Lincoln County Sheriff’s Office assisted at the scene. The sheriff’s office directed traffic, allowing firefighters to focus on the blaze. “They do a great job, and they kept the roads clear so we could do our job,” Higgins said.

“We rely on each other in these rural communities, and we worked together amazingly well,” Higgins said of the responding agencies. “I can’t say enough about how much I appreciate it.”