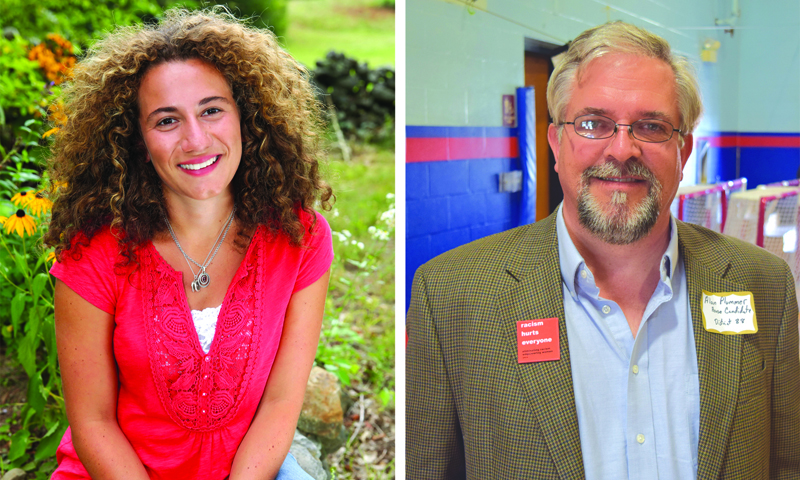 Chloe Maxmin and Alan Plummer are the candidates for the Democratic nomination in Maine House District 88.

The candidates for the Democratic nomination in Maine House District 88 will field questions during a forum in Whitefield from 6-7:30 p.m., Thursday, May 24.

The Lincoln County News will host the forum at the historic Kings Mills Union Hall. The district consists of Chelsea, Jefferson, part of Nobleboro, and Whitefield.

Chloe S. Maxmin, of Nobleboro, and Alan D. Plummer, of Chelsea, are the candidates. District 88 will have the only legislative primary in the county with more than one candidate.

Maxmin grew up on her family’s farm in Nobleboro. She started the Climate Action Club at Lincoln Academy and worked with students, teachers, community members, and businesses on local environmental and climate issues.

She then attended Harvard College and co-founded Divest Harvard, a campaign calling on Harvard University to divest from fossil fuels that ultimately drew 70,000 supporters. The day after she graduated, she moved back to Maine.

She worked on Bernie Sanders’ campaign and Ben Chin’s mayoral campaign in Lewiston and is a graduate of Emerge Maine, a six-month candidate training program for Democratic women. She has organized with Maine People’s Alliance, 350 Maine, and Campaign Earth on issues including Medicaid expansion, universal home care, energy policy, and rural transportation options.

Plummer is a teacher and a veteran. “I’ve been around the block a few times, but I’m well below the average age in our Maine Legislature,” he said.

“I’ve lived all my life in this area and I see the difficulty my three children and yours have paying for college, putting food on the table, paying rent, keeping their jobs! I know that most of us are one major illness away from financial ruin,” Plummer said. “I’ve helped my parents with the difficulties of aging and I know the support and protection they need to live with respect and dignity.”

“I’ve been in education for 20-plus years and I believe that supporting education is what makes our communities thrive!” Plummer said. “Knowing the needs of the people motivates me to focus on supporting working folks by creating and sustaining local jobs, supporting small business (and) family farms, and fully funding education. I’ll work in the Legislature to give us a fighting chance.”

“I’m a regular guy, and I care about regular people,” Plummer said.

LCN Editor J.W. Oliver will moderate the forum. The public will have opportunities to question the candidates themselves, as the moderator and the audience will take turns throughout the evening.

The Kings Mills Union Hall is on Townhouse Road in the Whitefield village of Kings Mills, just north of the intersection with Route 194.