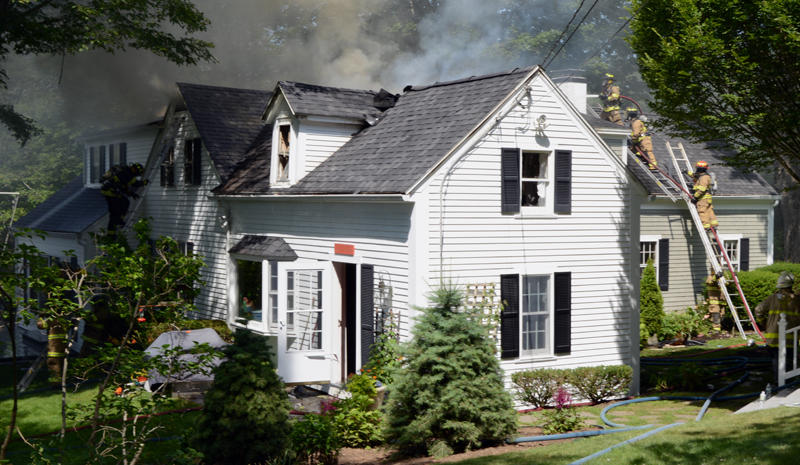 Firefighters attack a house fire from both sides at 26 Logan Road in Boothbay Harbor the morning of Tuesday, July 16. (Evan Houk photo)

Area firefighters battled a fire at an 1850 cape in Boothbay Harbor for over two hours the morning of Tuesday, July 16. The house has heavy damage, but the owners and their cat safely exited when the fire started.

John R. Stratton II and Carol G. Stratton, of Vero Beach, Fla., own the cape-style house, according to town records. The house is called Gull Run. 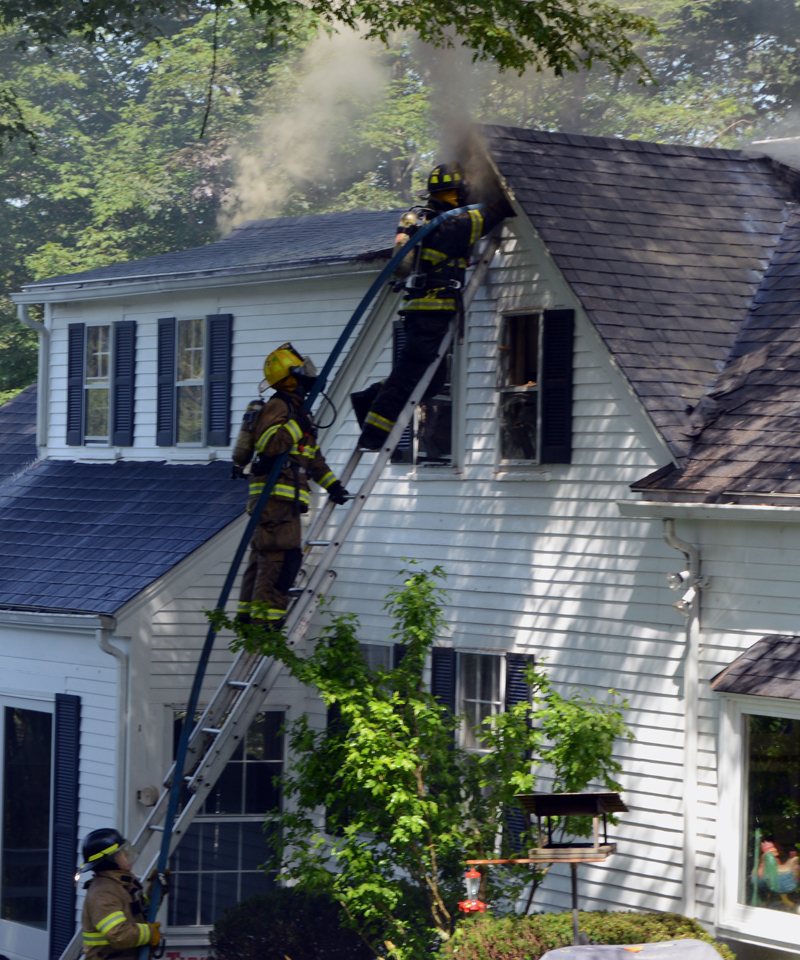 A firefighter attempts to douse the blaze at 26 Logan Road in Boothbay Harbor from the front side of the house after cutting a triangular hole in the attic wall with a chainsaw. (Evan Houk photo)

The owners vacated the premises when John Stratton noticed smoke coming from the outside of the house and called 911. The fire started before 8:30 a.m. and had been contained by 11 a.m.

John Stratton had set up a couple of heat lamps on a stepladder about 10-12 inches from the outside of the attic in an attempt to dry out some moisture underneath clapboards he had removed, according to Boothbay Harbor Assistant Fire Chief Glenn Tilton, who identified the lamps as the cause of the fire.

Tilton said that John Stratton had shut the 250-watt heat lamps off the night before the fire and checked the area for signs of heat or smoke. He turned them back on between 5 and 5:30 a.m. Tuesday before noticing smoke before 8:30.

According to Tilton, John Stratton attempted to extinguish the growing blaze with his garden hose, to no avail.

Firefighters attacked the flames mostly from the rear of the house, where the fire started.

At one point, a firefighter climbed a ladder leaning against the front of the house and cut a triangular hole underneath the peak of the roof with a chainsaw. He then had a fire hose relayed up to him to attempt to extinguish the blaze from the front.

In a phone conversation Tuesday afternoon, Tilton said the fire department was assisting with the removal of personal items from the house. Earlier, Boothbay Harbor police and firefighters could be seen shuttling large works of art and wall-hangings from the residence.

Tilton said the second floor is mostly burned out and there is a lot of water damage downstairs, adding that the whole house will most likely have to be torn down. He said an insurance adjuster was at the house.

Tilton credited a strong response for allowing firefighters to keep up with the blaze. He said there were about 40-50 firefighters on scene.

“It doesn’t take much to wear these guys out in that heat,” Tilton said.