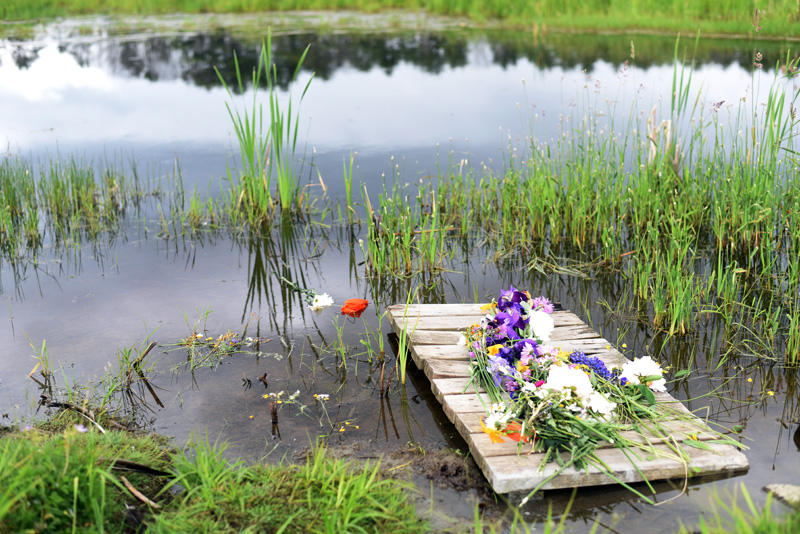 Hundreds of people celebrated the life of Isabelle Manahan at the Damariscotta River Association’s Great Salt Bay Farm in Damariscotta on a sunny Thursday morning, June 14.

Manahan, 15, of Newcastle, died in a car crash in Edgecomb on June 8.

The crowd sat on a grassy hill, spreading out blankets and hugging fellow attendees. In front of the group, multiple arrangements of pink and purple lupines framed a microphone and podium.

The 11 a.m. celebration opened with remarks by Garrett Martin, a friend of the family.

Martin shared a quote that Isabelle’s mother, Carrie Levine, had shared with him: “Grief is really just love. It’s all the love that you want to give, but cannot. Grief is just love with no place to go.”

Martin asked the crowd to look around at the many people in attendance.

“We are all connected through Izzy,” he said.

Abby Manahan, Isabelle’s aunt, read a poem by 9-year-old Isabelle entitled “Where Do Dreams Come From?”

“Does a dream just go straight back to heaven?” she read.

The Rev. Bobby Ives then spoke, reading a poem entitled “When Death Comes to Earth.”

“Flowers should not wither in the spring,” Ives read. “Death should not come when life is young.”

“We are all grateful for the opportunity to have known her,” Ives said after reading the poem.

Martin then spoke again, reading Isabelle’s own words about her love for her family.

“I look up to you guys so much,” Isabelle wrote about her family in one of her “memory pages” while a student at Great Salt Bay Community School.

Alex Levine, Isabelle’s uncle, spoke of Isabelle’s many “facets of light” that brought many people together.

Another uncle, Josh Manahan, spoke of how special Isabelle made him feel, and how she taught him “when it comes to the heart, keep it open.”

Sam Manahan, an aunt of Isabelle’s, said the 15-year-old “was flawless, and human,” calling her “a marvel.”

The last family member to give a reflection was Aidan Manahan, Isabelle’s older brother, who said that “Izzy liked to bring people together … she wanted everyone to be dear friends.”

Aidan Manahan encouraged those who miss his sister to “look for her in movement,” such as falling leaves and snow.

Newell and the other violinists then played “Ashokan Farewell.”

Thomas Kothe and Kelley Duffy, teachers at Lincoln Academy, where Isabelle was a freshman, read notes from students who knew her.

The notes described Isabelle as “indiscriminately loving”; full of love, joy, and compassion; “free spirited”; “respectful”; and “accepting,” and said “she is in every spontaneous adventure” and “brought smiles everywhere she went.”

“Izzy loved the world, and now she is the world,” another note read.

One friend wrote a poem, which read that “the flowers grew toward her light.”

Newell and other musicians then played “Wildflower,” singing, “You belong among the wildflowers; You belong in a boat out at sea; Sail away, kill off the hours; You belong somewhere you feel free.”

Barry King, one of Isabelle’s skiing coaches and captain of the Mary Day, the schooner Isabelle planned to spend much of her summer on, said that this past week, he had spent time sailing and thinking of Isabelle.

King wore a pink tutu for his reflection, garnering laughs and applause from the crowd as he curtsied. Isabelle had a love for dance, particularly ballet.

“This hurt is never going to go away,” King said, remembering the bubble-gum pink helmet Isabelle wore while skiing and her “fierce blue eyes.”

King said that while Isabelle was very talented, she never wanted to outshine her friends, and was an example of “how to live with integrity.”

At the beginning of his reflection, King said Isabelle liked to sew and had made a beautiful quilt.

At the end of the reflection, he asked Isabelle’s parents and brother to stand up and face the hundreds of people sitting behind them, saying the people present are the quilt Isabelle had sewn.

King said she made the quilt by bringing people together.

Martin then read from Isabelle’s memory pages about her love for dance.

Isabelle was proud of her decision to dance, writing that she “wasn’t following in anybody’s footsteps,” but was instead following her heart.

Dancers from The Ballet School, where Isabelle studied, performed a piece, each dancer giving a flower to a member of the Manahan family.

One of Isabelle’s favorite songs, “Wagon Wheel,” was then performed by Helen Newell, Sam Laemmle, Essie Martin, and others, with members of the audience singing along.

The celebration ended with those in attendance joining hands and reading Isabelle’s favorite grace: “For the beauty of hills and harbors, for tomorrow and today, for food and clear fresh water, and for friends, here and away, we thank you.”

The crowd was then invited to take flowers and join the Manahan family in walking down a path, winding through the tall grass, to place the flowers in the river.

A group stationed themselves at the opening of the path, singing “The Farthest Field,” while the hundreds of attendees began the trek to the water.

“Oh walk with me and we will see the mystery revealed; When one day we wend our way up to the farthest field,” the group sang, giving hugs to many passing through.

“There is a land high on a hill where I am going; there is a voice that calls to me; the air is sweet, the grasses wave; the wind is blowing away up in the farthest field,” the group continued to sing, while hundreds of flowers drifted down the river.