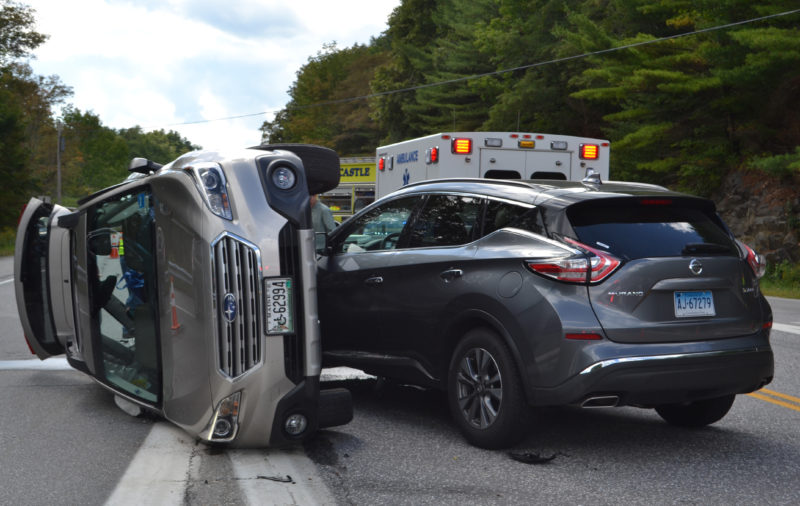 The elderly driver of the Subaru attempting to make an illegal U-turn on Route 1 in Newcastle caused a two-vehicle accident the afternoon of Friday, Sept. 8. (Maia Zewert photo)

An elderly driver attempting to make an illegal U-turn on Route 1 in Newcastle caused a two-vehicle accident the afternoon of Friday, Sept. 8, resulting in multiple injuries.

Irving Wright, 91, of Oakland, was driving a Subaru south on Route 1 just past the southbound on-ramp when he attempted to make an illegal turn to reverse directions around 1:30 p.m., according to Lincoln County Sheriff’s Office Detective Scott Hayden. Wright’s wife, Joyce Wright, 86, was the passenger in the vehicle.

Irving Wright drove into the path of a southbound Nissan Murano driven by Nancy Burhop, 72, of Evanston, Ill., Hayden said. Burhop’s husband, Jeffrey Burhop, 72, was also in the vehicle.

The Nissan struck the Subaru on the driver’s side, causing it to overturn, Hayden said. The Nissan sustained front end damage.

Hayden credited the “quick and helpful response” of passersby who stopped to help the occupants of both vehicles before emergency services arrived on scene.

The Newcastle Fire Department also responded to the scene and provided traffic control.