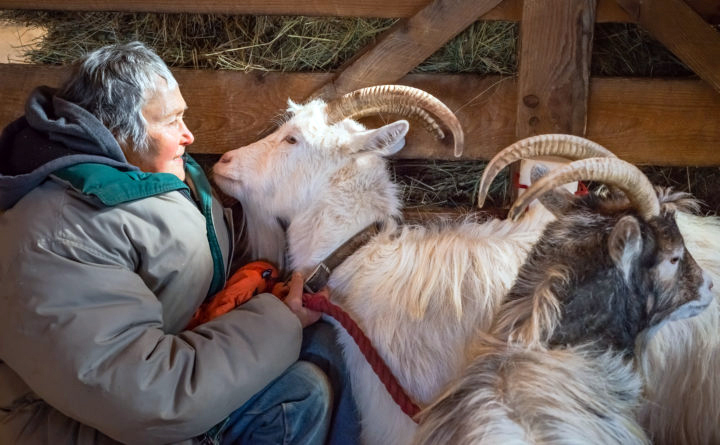 In season four of HBO’s hit fantasy series “Game of Thrones,” Daenerys Targaryen loses control of her growing dragons. The hungry beasts terrorize the countryside in search of food and mischief. In one episode, the formidable black-and-red dragon Drogon flies between bucolic hillsides, breathing fire at a herd of small, shaggy goats and snatching one for a snack.

Drogon may be computer-generated, but the goats are real. The scene was filmed in West Iceland with Icelandic goats, which are the only goat breed in the small island country. Despite the 15 minutes of fame, the Icelandic goat is critically endangered, with more than 1,000 goats left in the world.

The goat was once only found in Iceland, but the rare breed has recently found a second home: Maine.

For nearly a decade, the Beau Chemin Preservation Farm in Waldoboro has been working to breed Icelandic goats using imported genetic material.

Though it is the only sanctuary for the species outside Iceland, new international livestock regulations may threaten its future.

The Beau Chemin Preservation Farm in Waldoboro is home to 10 endangered or threatened breeds, including poultry, sheep, goats, and equine. Jo Ann Myers, who owns the farm with her husband, Wayne, said the two “got involved in conservation breeding in kind of a silly way.”

“We just really like old things and saving old stuff,” Myers said. While she said they “never were in a position to buy antique furniture,” her husband used to repair damaged oriental rugs to resell at a higher value while he was in medical school. The hobby also lent itself to an interest in specialty fiber and natural dye. Then, in the early 1980s, the two stumbled across an article in Smithsonian Magazine about endangered breeds of livestock.

Soon after, they purchased their first endangered heritage breed: Soay sheep, a breed from two islands off the west coast of Scotland. Besides having unique wool, the Soay sheep was exceptionally rare.

“We started to focus on livestock that were the most endangered because we’re a really small farm,” Myers said. “If there’s only 500 of a breed left and you add two or three, that makes a difference.”

An introduction to Icelandic goats

Around 2010, Myers said a friend of hers who raises goats told her about the critically endangered Icelandic goat. She was immediately intrigued.

“That they are critically endangered, that they produce fiber, that they produce dairy, all of that appeals to us,” Myers said. “It makes sense for us in the Northeast, where we have a lot of small farmers trying to diversify. Every animal has more than one purpose.”

Myers reached out to the Farmers Association of Iceland and expressed her interest in raising the goats. Eventually, she was put in touch with Birna Kristin Baldursdottir, supervisor of the Icelandic Genetic Resource Center in Borgarnes, Iceland.

Baldursdottir recognized the need for a sanctuary for the goats outside the island country from a conservation perspective.

“Our livestock is vulnerable because they have been isolated,” Baldursdottir said. “If something happens to our goats in Iceland – for example, a disease – then it’s very good to have a backup in Maine so that we could maybe collect the genetic material to restore the population.”

Even though Baldursdottir was willing to help, there was a roadblock: The Icelandic goats could not legally be exported to the United States. The solution? Artificial insemination with Icelandic goat semen.

Though the U.S. Department of Agriculture prohibits the import and export of live goats and sheep from all countries except Canada, Australia, and New Zealand, Myers was able to import a shipment of 100 straws of Icelandic goat semen. Myers then artificially inseminated female Oberhasli dairy goats, which have a similar ancestry, with Icelandic goat semen. Over generations of inseminating the goats with the pure Icelandic goat semen, the offspring get more and more Icelandic.

Artificial insemination is an imperfect solution. The Myerses tried vaginally inseminating their goats themselves with little success, and have recently found a new veterinarian that specializes in laparoscopic, or surgical, insemination. Plus, they will never have 100 percent Icelandic goats at Beau Chemin Preservation Farm.

It is, at least, a start though. Beau Chemin Preservation Farm now has 17 healthy goats, some of which are 87 percent Icelandic. They estimate that in a few more generations, they will have close to 99 percent Icelandic goats.

“Every generation has less Oberhasli (dairy goat DNA),” Myers said. “With the higher-percentage Icelandic, you can really see a change in physique. They are shorter-legged, you can see the cashmere, and they have pretty good-sized udders.”

Much of the semen comes from goats in Johanna Thorvaldsdottir’s flock on her farm, Haafell, in Borgarnes, Iceland. Thorvaldsdottir owns the world’s largest flock of Icelandic goats, with 208 in total. Her goats were the lucky flock featured in the 2014 “Game of Thrones” episode.

Thorvaldsdottir has been raising Icelandic goats for nearly three decades. Prevailing cultural attitudes about the value of goats in Iceland (compared to the fuzzier, fattier Icelandic sheep, which dominate the Icelandic wool and meat markets) had caused the population to dwindle significantly.

“When I started 30 years ago, there were 300 goats in Iceland on 40-ish farms,” Thorvaldsdottir said. “When I started milking, there was no one milking goats. People will look at me and say, ‘Do you eat them? Don’t they taste goaty?’”

Since then, the attitudes have shifted in Iceland. “Before 2005 there was no demand for the products,” Baldursdottir said. “There’s been a lot of publicity these last years about the situation of the breed. People are interested in both buying the products and the goats themselves.”

But the cultural attitudes toward the goats led to genetic problems that continue to impact their conservation.

“Most people had just wanted them as pets,” Thorvaldsdottir said. When the animals no longer had a functional purpose, their owners were less conscious of breeding within the tiny population. “If animals are just pets, we are not thinking about inbreeding. That was one of our biggest things, was breeding them out.”

Myers is now very conscious of inbreeding with the satellite flock, too. She works closely with Baldursdottir to match the goats for minimum breeding crossover between related goats.

“When we got our semen from Iceland, each buck was labeled separately, so that way you can breed and not breed daughters to fathers,” Myers said. “We’re relying on Iceland to keep as much genetic diversity as possible.”

But by far the biggest challenge to the Myers Icelandic goat conservation project is updated USDA regulations. In 2016, the USDA revised its protocol for the importation of sheep and goat semen from Iceland with stricter biosecurity measures to prevent the spread of disease, including extended quarantines for bucks providing semen and more extensive testing for disease.

“It was no problem for us to send it the first time, but they changed the protocol,” Baldursdottir said. “Now we have to test for diseases that are not even found in Iceland, but the U.S. authorities … want to have it confirmed that these diseases are not here. It’s expensive, but we are hoping we can do that this year and they can get a semen (shipment) in the fall.”

“The current regulations (we are) required to follow (regarding) importing semen and the really strict biosecurity rules really make it a huge effort to draw goat semen,” Myers said. “(The Icelandic semen collection facilities) do a lot more sheep semen, so there is a tremendous amount of lead time.”

The Myerses have been waiting more than two years for their second importation of semen. They only have 11 straws of Icelandic goat semen left – 11 more shots at artificially inseminating the next generation of Icelandic goats in Maine.

But hope is not lost on the Beau Chemin Preservation Farm. Myers has a vision that her males, which have a higher percentage of Icelandic DNA, can be used on other farms to start their own breeding programs.

“There are probably a dozen people across the country who have expressed some interest,” Myers said. “We’re kind of stuck right now, but we’re not giving up.”