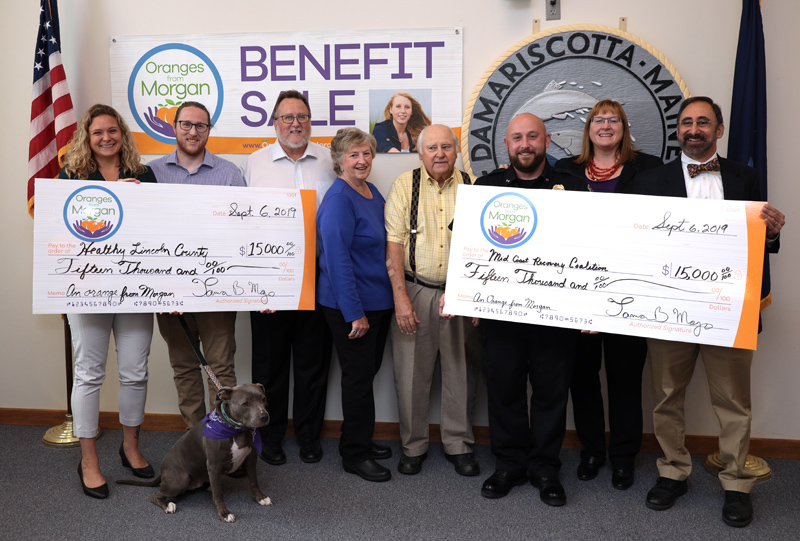 The donation of $30,000 for addiction prevention and treatment is only the beginning of a Damariscotta couple’s effort to fight addiction in memory of their late granddaughter.

The new charity Oranges from Morgan presented $15,000 donations to Healthy Lincoln County and the Midcoast Recovery Coalition during a ceremony at the Damariscotta town office Friday, Sept. 6.

Oranges from Morgan seeks to counteract the negative stigma surrounding drug addiction by raising awareness and telling the story of Morgan Mayo, the granddaughter of Damariscotta residents Ernest and Florence Bourgon, who died June 12 at 22 years old from a drug overdose.

At Morgan’s funeral, Florence vowed to give everything she owns to fight addiction and talked about how addiction affects everyone, according to Morgan’s mother, Tamra Mayo.

Tamra said she thinks the most important step is to increase awareness about the addiction crisis that has been ravaging the state and the nation for the past several years.

“I think a lot of people are saying, you know, ‘These people are bad people, they’re making a choice,’ and the community kind of shuns them,” Tamra said in an interview after the ceremony.

Morgan was a college student. “She was a good kid, didn’t always make the best decisions, but, I’ll tell you, she had a heart of gold,” Tamra said. “And if you look at her picture, people are like, ‘That’s not what a drug addict looks like.’

“Well, that is what a drug addict looks like. They’re people, they have families, they have hopes and dreams. People need to realize that it’s a community problem.”

However, Attorney General Aaron M. Frey said in April that Maine still sees about one death a day and “there is no evidence to suggest that fewer Mainers are suffering from opioid use disorder.”

“Individuals, families, and communities continue to be harmed by this public health epidemic, and work must continue to address this crisis,” Frey said in a statement.

The National Institute on Drug Abuse defines opioids as “a class of drugs that include the illegal drug heroin, synthetic opioids such as fentanyl, and pain relievers available legally by prescription,” such as oxycodone, hydrocodone, and morphine.

Morgan Mayo’s family formed Oranges from Morgan to support the kind of prevention work the attorney general was talking about.

The charity was established by Morgan’s parents, Tamra and Joe Mayo; her brother, Derek Mayo; and her grandparents, the Bourgons. The Mayos live in Massachusetts.

The family was joined at the donation ceremony by Morgan’s pit bull, Marley.

The Bourgons ran a tent sale at the corner of Bristol Road and High Street in Damariscotta throughout August, selling their antiques and collectibles and accepting donations. All proceeds went to Oranges from Morgan.

By all accounts, Morgan was a giving individual with a huge heart. Her mother said that when she was attending Arizona State University, she would drive around with a bag of oranges, a case of water, and dog food to hand out to homeless people and their pets. This work inspired the colorful name, Oranges from Morgan, as well as the goals of the charity.

The family wants to continue Morgan’s spirit of giving through the charity. In addition to addiction prevention, it will support other causes that were important to Morgan, like diabetes research and animal welfare, Tamra said.

The tent sale attracted a steady flow of visitors, about 80% of whom told stories of how they had been affected by addiction. Tamra said there was a lot of crying, but also a lot of hope, because the family met many people in recovery from addiction.

Tamra said the idea for the charity was also inspired by her conversation with Damariscotta Police Chief Jason Warlick shortly after Morgan died. Warlick told her the community needs resources to fight the widespread and often misunderstood problem of drug addiction.

Warlick spoke at Friday’s ceremony, sharing his personal experience with his mother’s recovery from addiction. He stressed the need to eliminate the negative stigma attached to people struggling with addiction.

“The number one thing that I want to do before I retire is to burn the stigma about drug addicts, and about recovery, and reintegration into the community, because that’s really what this is about. … Twelve years ago, I would have told you straight-faced, arrest them, throw them in jail, it’s their choice, and be done with it,” Warlick said.

Tamra said Oranges from Morgan is just ramping up. She is working on a calendar featuring professional photographs of Marley, the pit bull, dressed in seasonal garb.

The photographs include Marley dressed as the pope and as a Founding Father for Presidents Day. All the proceeds will go toward an animal rescue, Tamra said.

Tamra said the charity is looking into other fundraising events, like a golf tournament. For more information or to donate, visit orangesfrommorgan.org.