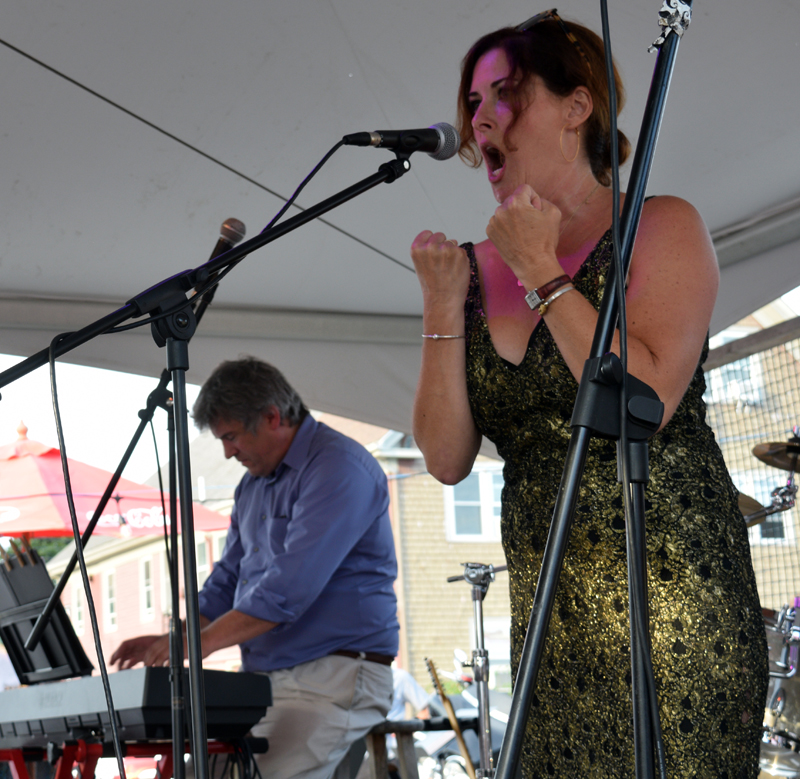 Alumni of Newcastle’s Lincoln Academy came together to play an eclectic mix of music at the inaugural Linaca Music Festival at Schooner Landing in Damariscotta on Friday, Aug. 5.

Approximately 200 people, including alumni, family, friends, and summer visitors, packed the dock at Schooner Landing for the event. Members from the class of 1988 through the class of 2020 enthusiastically played along in 12 different sets with a lineup of musicians that was rotated and shuffled throughout the night.

The music featured a little something for all tastes and ages. Each lineup played two or three songs apiece in genres ranging from rock and roll to modern pop-punk, classic opera, foot-stomping Americana, mellow jazz, and even a little “Touch of Tuba.”

Toward the middle of the event, Sam Russ, class of 2019, played a light-hearted instrumental tuba solo with Jojo Martin, class of 2020, accompanying on keyboards.

“It’s my belief that it wouldn’t be Linaca without just a Touch of Tuba,” Russ said.

Popular local band The Gulch kicked off the event with a rendition of “Josie” by Steely Dan and The Allman Brothers Band’s classic “Whipping Post.”

“We had to break the ice a little bit, play something wild,” Chute said before leaving to play another gig that night.

Operatic mezzo-soprano Kate Aldrich took the stage to perform with accompanist Sean Fleming, singing the “Habanera” aria from Georges Bizet’s 1875 French opera “Carmen” and the standard “Cry Me a River.” Aldrich, a graduate of LA’s class of 1992, performed the titular role in the San Francisco Opera’s 2006 production of “Carmen,” and has sung internationally with renowned opera companies, including the Metropolitan Opera in New York City.

The audience was intrigued from the outset, but when Fleming played the staccato notes of Bizet’s famous melody, a wave of recognition passed through the audience that seemed to transfix the focus on Aldrich’s performance. Her articulated acting and rich vocal timbre brought a taste of the glittering opera stage right to Schooner Landing.

Haley Graves, a pop-punk artist and 2019 LA graduate now based in Seattle, Wash., brought the tempo up with original songs from her recently released EP, including “She Thinks My Pop Punk Is Cringey” and “Pop Punk Princess.”

Graves’s stage presence was magnetic. In 2021, she opened for close to 100 artists. She spoke between songs about her aim to encourage individuality and representation of Black and LGBTQ+ artists within the music industry, and got the audience involved in a lyric callback.

Theater veteran Joe Lugosch, class of 2008, served as the master of ceremonies, keeping the event light with his whimsical humor and tongue-in-cheek introductions of the musicians between sets.

“If you have any questions, please don’t ask me,” Lugosch said after opening the event.

Lugosch said that 15 of the 20 musicians who performed are alumni of Lincoln Academy and the other five all have close ties to the school.

Money was collected throughout the night and a QR code was even featured on the flyer at people’s tables to make it easier to donate right from one’s cell phone. All the proceeds went to LA’s performing arts department.

The “Linaca Fair” was first held in April 1941 at Lincoln Academy and featured a hobby show, a “fancy poultry exhibit,” a science exhibit, a one-act play, a “grand ball,” and music from Lloyd Rafnell’s band.

“I was unable able to find any information or recordings of Lloyd Rafnell’s band,” Lugosch said. “But I can only assume that they sang old-timey music into a can … and I base that purely on the movie ‘O Brother, Where Art Thou?’”

Actor Anna Belknap, class of 1990, spoke to the crowd, telling them she is not a musician, but she can be considered part of the “fancy poultry” exhibit.

Belknap is perhaps best known for her role on CSI: NY as Detective Lindsay Monroe in 2005 and for guest-starring in Law & Order, Law & Order: Special Victims Unit, and Without a Trace.

Belknap spoke to her time with the LA Players in high school– driving in a van across the state, acting out skits about drug and alcohol awareness and answering questions in character.

“I learned more about acting in that program than a lot of acting programs; about truth, about empathy, about vulnerability, about being an actor,” Belknap said.

She noted how many creative graduates have come out of LA and how important arts programs at schools are in nurturing that kind of talent and original thinking.

Heather D’Ippolito, director of community engagement and development at LA, and Juliet Kelsey Holmes, class of 1992 and a member of LA’s Board of Trustees, conceived of the idea as a way to showcase the talent that has come out of the school and bring alumni together.

“Right now, it’s exciting to sit back and watch the reunion happen,” D’Ippolito said prior to the start of the music on Friday. “People are coming out, hugging, and reconnecting.”

Holmes was also involved in organizing a class reunion for her class of 1992 that was held the following night at Sprague Point in Nobleboro.

When searching for a name, someone suggested using Linaca after seeing a poster from the original 1941 event hanging in the school, D’Ippolito said.

Corey Redonnett, class of 1988, was instrumental in spreading the word and bringing together all the musicians for the festival, Holmes said.

Holmes noted that her father, Paul Kelsey, class of 1962, attended the event and her children did as well.

“What a way to bridge the gap of community,” Holmes said.

Holmes said she hopes the festival can become an annual event and expand to include an art walk and maybe some shows at the Lincoln Theater.

“We’ve just scratched the surface,” Holmes said of the artistic talent that has come from LA.