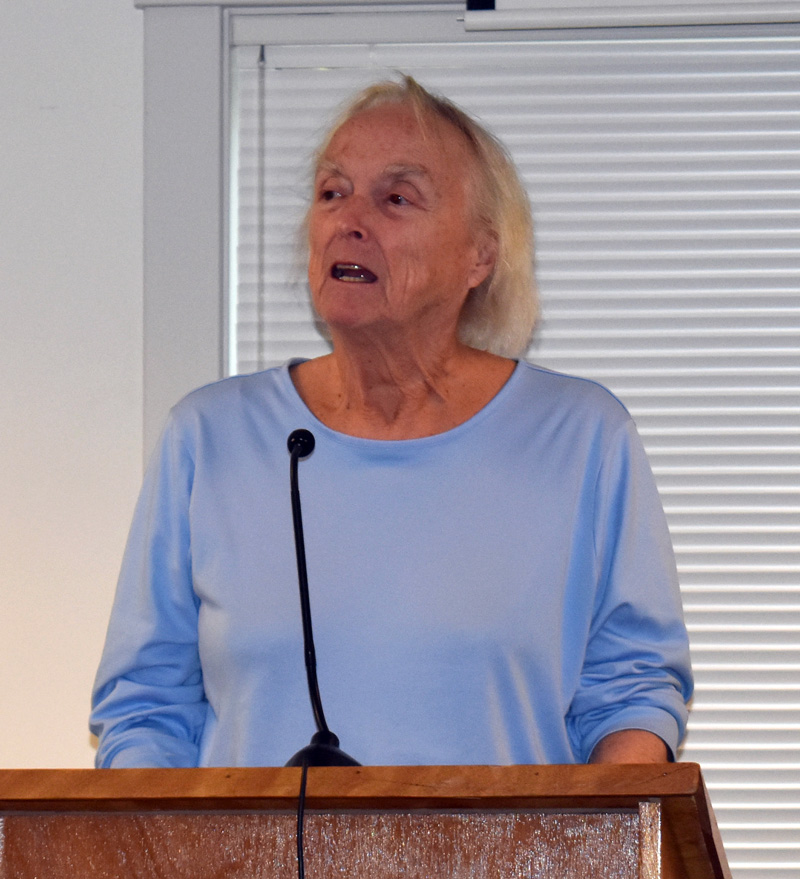 Betsy Wooster asks the candidates about the role of a community navigator. (Alexander Violo photo)

Two candidates for one spot on the Waldoboro Board of Selectmen took part in a candidates forum at the town office, fielding questions from residents and laying out their approach to town government, Thursday, May 30.

Robert Butler, the incumbent and current chair of the board of selectmen, and Sandra O’Farrell, a member of the RSU 40 Board of Directors, are running for the three-year term.

The forum began with introductory remarks from the candidates.

O’Farrell said she has lived in Maine for 42 years, mostly in Waldoboro. She has worked in managerial positions with the Maine Bureau of Veterans’ Services and the Maine Department of Inland Fisheries and Wildlife.

She also worked for H&R Block, a tax preparation company. She said her background in accounting and finance would contribute to her approach to governance.

“I want to make fiscal responsibility a high priority for our town,” O’Farrell said.

O’Farrell has been on the RSU 40 board for nine years. She chairs the facilities and maintenance committee, where she helped to implement an energy efficiency program to save taxpayers money, in addition to assisting with the development of the district’s 10-year comprehensive plan.

O’Farrell said she is proud of new programs at local schools, including an addiction services program at Medomak Valley High School and a food pantry at Medomak Middle School.

“Sometimes you do something the papers notice, sometimes you don’t, but it all adds up to making Waldoboro a better place,” O’Farrell said.

During his opening remarks, Butler spoke of how he and his wife, Sally, moved themselves and their business, The Jojoba Co., to Waldoboro in 2005.

“We chose Waldoboro then for the same reason we would choose it now. It’s accepting of new arrivals and offers a quality of life in a fascinatingly diversified town with a working river as its economic backbone,” Butler said.

Butler said he decided to run for reelection to continue his work on ongoing projects.

“We are in the middle of things but much remains to be done,” Butler said, referencing the repurposing of A.D. Gray and the addition of solar panels to the Sylvania brownfield site as two possible future endeavors.

Butler said he would support appointing a community navigator as a means to address social issues in town, including food insecurity, unemployment, and underemployment.

Another big priority for Butler is keeping the Medomak River clean and continuing the work of the Medomak Project.

After introductions, the candidates fielded questions from the moderator, J.W. Oliver, editor of The Lincoln County News, and the audience.

Nancy Gault asked how the candidates would improve the town’s schools while being fiscally responsible.

Butler said education is a substantial cost for the community, but an important one to shoulder.

“Education costs a lot of money, but if you don’t spend money on education, you aren’t going to have educated kids,” he said.

“A capital plan is very important. It is likely to increase taxes, but it is money you have to spend. I don’t think the district can be accused of wasting money, but there are ways to save money,” Butler said. 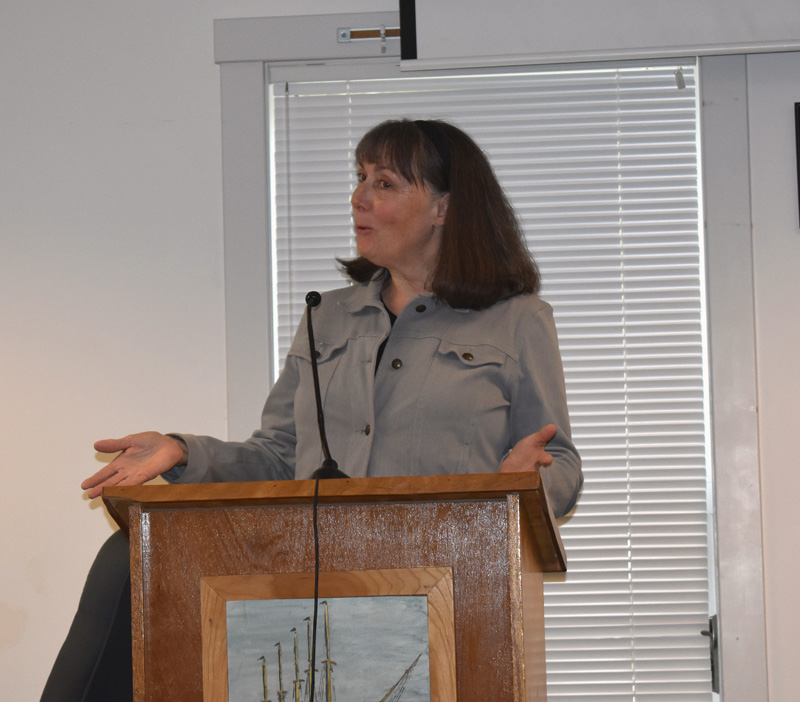 Butler said it is important to keep students engaged and involved, referencing an exhibit of student artwork at Waldoboro’s Tidemark Gallery.

Butler said the new Midcoast School of Technology will open in the fall with 18 different courses in the trades available to RSU 40 students.

O’Farrell said the district’s comprehensive plan is a good way to prepare for future projects and needs. She said that in the past, the district has been hampered by administrative turnover, with five superintendents in nine years.

“I think the superintendent is on the right track. We need consistency,” O’Farrell said.

O’Farrell said a priority has been bringing teachers’ wages up so they are not lost to neighboring school districts. The district hired a young director of instruction last year and is “bringing younger teachers in and keeping them,” she said.

O’Farrell said budgets have been kept down by putting bandages on buildings, but eventually larger repairs will have to be undertaken.

Betsy Wooster asked for clarification about the role of a community navigator, a position referenced at a May selectmen’s meeting and during Butler’s opening remarks.

Before the candidates had a chance to respond, Wooster implored them both to keep working for the town regardless of the election results.

“However this turns out, I hope you both stay committed to the community,” Wooster said.

Responding to Wooster’s question, Butler said a good example of the work a community navigator would do can be seen at the Boothbay Region Community Resource Council.

“They are a group getting together to deal with real issues, like the ones we are dealing with here,” Butler said.

Butler said a community navigator would help connect people in need of food, medical supplies, or car repairs with services to help them.

“It’s a very different approach to dealing with social issues. We don’t have an agency in town that provides social workers, someone to pull all the threads together. Drugs are not the problem; they are a symptom of the problem. We need to pull it all together so a person gets the help they need,” Butler said.

O’Farrell said she is not sure she is on board with the idea of a community navigator. She said the town has a police chief who is active in community policing, in addition to a website with links to services and an addiction program that meets at the Veterans of Foreign Wars post. 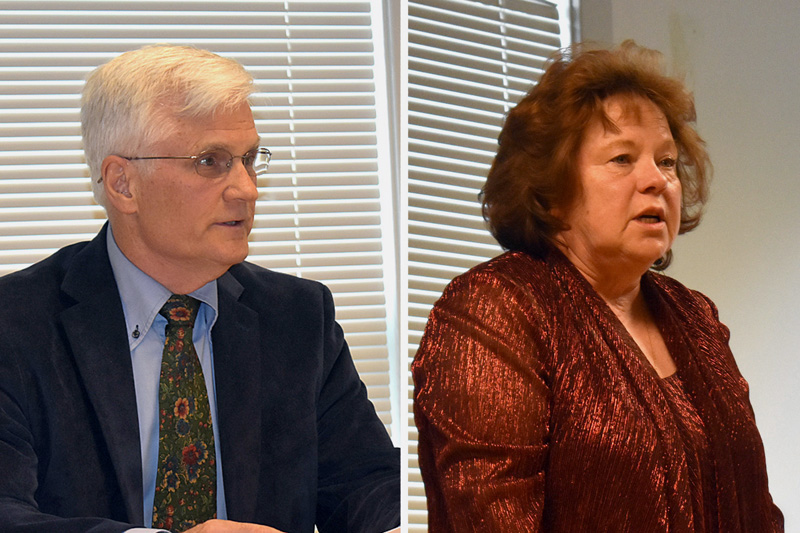 Robert Butler and Sandra O’Farrell participate in a candidates forum at the Waldoboro municipal building Thursday, May 30. Butler and O’Farrell are running for a three-year term on the board of selectmen. (Alexander Violo photos)

“There is always someone at the town office. I need to research more into it before I’m ready to (spend) more dollars for a navigator. There are a lot of other resources in town,” O’Farrell said.

A question from Oliver, the moderator, touched on each candidate’s stance on a community center in Waldoboro.

O’Farrell said she is in favor of having a community center in town.

“I believe in a community center. We have no recreation center or place for teens and kids to go and be active,” O’Farrell said.

However, O’Farrell said such a facility should not be limited to the town’s youth, but could be a place for programs to serve elderly residents.

“We need to do something to get people to come to town. We need a community center, not just a recreation center,” O’Farrell said.

Butler said he is in favor of the idea, but wants to know what type of community center the town wants.

Butler floated the idea of combining services in such a center, as the town also needs a new medical facility.

“The concept I’m leaning toward is something different, something more than just recreation,” Butler said.

Butler said a community center could also be a good place to house a community navigator. He said such a facility should not just be for kids, but for all demographics.

Oliver asked a separate question about the future of A.D. Gray, the former school in the heart of Waldoboro’s village.

There is new potential for redevelopment of the site, according to Butler.

“We are in discussion with a private company about the possibility of repurposing the building to condos. They are convinced it is in good condition. It’s something to work on and not ignore. We are shooting ourselves in the foot to leave it on the table,” Butler said.

Butler said if there are no takers, the town will eventually have to tear the building down, but the cost would be around $250,000.

O’Farrell said she understands talks on the project are in progress and the town needs to see if they go anywhere before deciding what to do with the property. She said she doesn’t know the specifics of discussions because she is not a sitting selectman.

At the forum’s conclusion, each candidate offered their closing thoughts.

Butler said the townspeople have a choice between two different approaches to town government and said he looks forward to the opportunity to continue working for the town.

“I want to find common ground, build consensus, vet it, and implement it,” Butler said.

O’Farrell said she would hear people out, ask questions, and be willing to learn.

“I have always been a go-getter. I’m good at getting things done. I promise you I’ll be fiscally responsible. Tax revenue isn’t Monopoly money you can just throw away,” O’Farrell said.