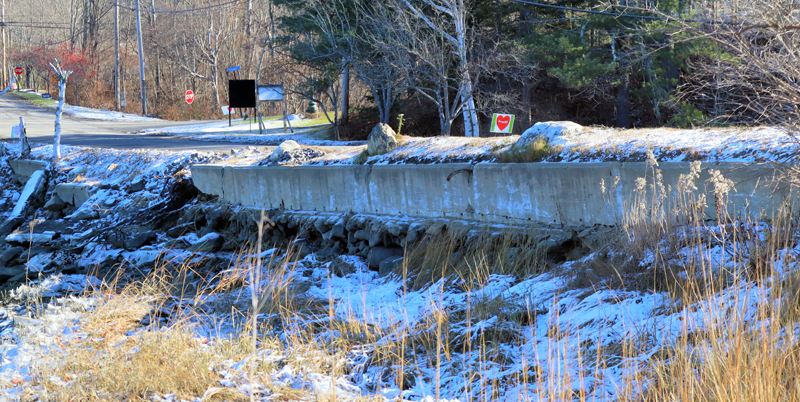 The crack running along the bottom of the concrete wall supporting Miles Street in front of the LincolnHeatlh-Miles Hospital Campus. (Emily Hayes photo)

After President Biden signed the initial infrastructure bill into law earlier this month, towns in Lincoln County began identifying potential development, broadband, and road rebuilding projects that could benefit from the federal grants soon to be available.

Of the $1 trillion that made it through U.S. Congress, tens of billions of dollars have been set aside to improve broadband in rural towns like Dresden, where patches of residents have internet access that is reliable at best.

Town officials have been looking into potential fiber cable and high speed internet projects for quite some time, Dresden Selectman John Rzasa said. This will give the municipality a leg-up on pursuing funding from the Biden administration, which stated it will focus on “shovel-ready” projects that promise to strengthen local economies by including equitably distributed internet access.

“For us to upgrade the town, it would cost well over a million dollars to get everyone good internet access,” Rzasa said, “which is not something we have the money for.”

The select board considered partnering with the town of Woolwich to pour funding into a high-speed internet system, but the project would “still cost more money than what we have available,” Rzasa said, and federal grants could fill the gap.

“Everything is up in the air,” Goodkowsky said, but there are “a lot of homes on the eastern side of town that are underserved” by internet access, and could benefit from the broadband expansion proposed under the new infrastructure bill.

Damariscotta and Newcastle paid for a feasibility study with Tidewater Telecom, which found that expanding the physical fiber networks instead of relying on internet satellites would be the “best bet in terms of what technology we will need in the future” for the best service, Goodkowsky said.

Hardwire systems don’t have slower service when a lot of people are trying to use the internet in the same area at the same time for work or school, he explained, not to mention the fact that it is more energy efficient than cable internet.

Fiber optic uses up to 12 times less energy when transmitting information compared to cable internet, according to research conducted by the Sustainable Technology Environments Program under the Telecommunications Industry Association.

Converting buildings and the technology they use to be efficient and renewable is another area gaining large federal funding resources, but Goodkowsky said Damariscotta and Newcastle will focus on pinpointing residents who are in the internet gap, help them afford the increasingly vital service, and help them understand how to use it.

The federal infrastructure bill also directs tens of billions to rebuilding roads; improvements that could boost other services in Lincoln County.

Municipal governments received federal dollars through the American Rescue Plan Act (ARPA) earlier this year, as well, but the uses for the money are “relatively limited,” Matt Lutkus, town manager for Damariscotta, said.

The town is using ARPA funding for projects such as remodeling and reconfirming the chamber of commerce building, but the county could most likely use funding from the infrastructure bill to reconstruct roads and storm water systems that are flooding, Lutkus said, though town employees would have to research specifics to ensure projects comply with federal laws such as the Clean Water Act.

Several roads in Damariscotta, including Church Street, Egypt Road, and Back Meadow Road, experience major flooding from culverts that need to be rebuilt, Lutkus said. Church Street in particular has a sidewalk and bikeway that regularly floods.

“They need some attention, it is long overdue,” Lutkus said. 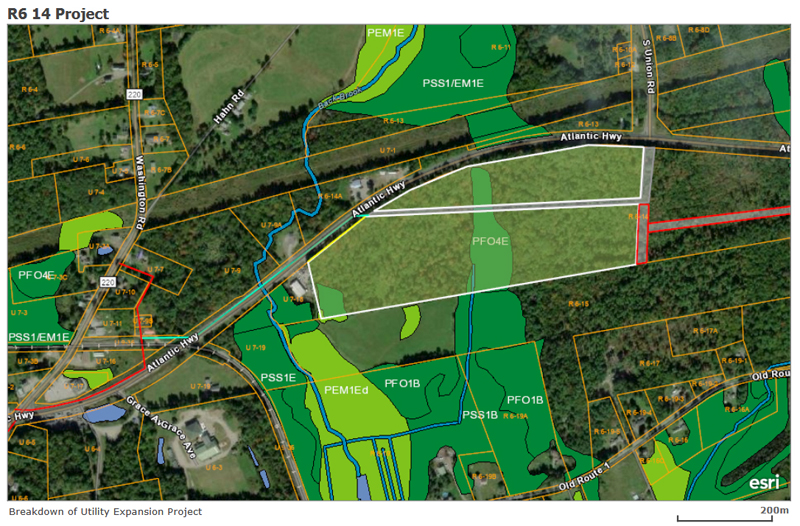 More frequent storms with greater intensity under a changing climate have turned occasional flooding sites into “points of major concern,” he added.

Miles Street, the road that leads to the LincolnHealth – Miles Hospital Campus, also needs to be repaved, Lutkus said. The retaining wall supporting the road over the low-lying wetlands has started to collapse. Another major storm could wipe the road out, destroying an access point for the hospital.

LincolnHealth entered into an agreement with the town of Damariscotta to pay half of the price of the reconstruction, despite the fact that the road is owned by the town. But the bid prices the town received were more than what both entities combined could afford, Lutkus said.

When grant funding is available through the infrastructure law, Damariscotta will “have these projects ready to go,” Lutkus said. “We know what the cost is, and as soon as the money is ready we can jump on it.”

The bottom of Winslow Hill Road in Nobleboro has also been worn down by heavy rain storms, but Selectman Richard Spear is skeptical of how much funding from the infrastructure bill will go to municipalities.

“I have a feeling it is going to stop at the state level,” Spear said.

In an effort to prepare for the upcoming surge in funding for infrastructure projects, the Waldoboro Select Board approved an initial engineering study for water and sewer pipe extensions along U.S. Route 1 during its meeting on Nov. 23.

Local surveyor and engineering firm Gartley and Dorsky will conduct the study on the roughly 70-acre parcel of forested land south of the U.S. Route 1 and State Route 235 intersection, costing the town about $23,800.

Waldoboro plans to apply for a grant from the U.S. Economic Development Administration (EDA) to fund 80% of the construction of the water and sewer lines, Max Johnstone, the town planner, said.

After the lines are extended, the land would be eligible for development, which will contribute to Waldoboro’s economy and grow its employment capacity, Johnstone said. The town government would apply for the EDA grant next year, with construction potentially starting in 2023.

If Waldoboro is not successful in acquiring the funding necessary for the project from the EDA, the project could be carried out in two phases with additional funding from the infrastructure bill, Johnstone said.

“We need to know more details,” he added, but there is also potential to improve and ensure high drinking water quality in the area in addition to the sewer and water expansion project.

The select board also requested the land be appraised in case the municipality wants to purchase it and lease portions of it off to businesses or subdivide the land. Waldoboro is still in ongoing discussions with the current owners of the parcel, but “they have been very receptive and positive about this project,” Johnstone said.

“The current owners could keep the land, but they would have to use it for development in the form of apartment buildings or industrial work – things that will bring jobs,” he said.

Lawmakers in Washington are taking on another spending bill that would tackle investment in infrastructure projects for climate resilience, but the initial $1 trillion spending law could make a difference for Lincoln County roads and employment.