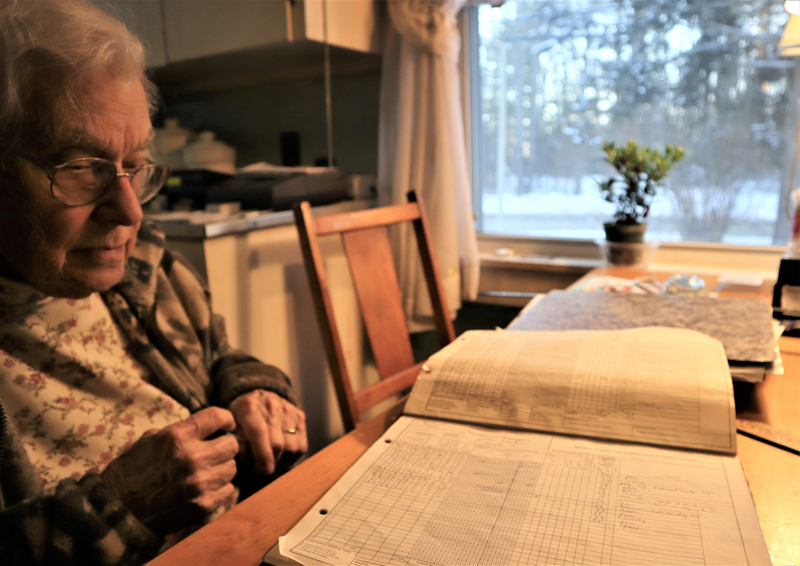 Newcastle resident Arlene Cole has been recording the temperature in Lincoln County for over 70 years, long before climate change was a household term.

It started as a hobby in the 1950s, but in 1965 she started sending her records to the National Oceanic and Atmospheric Administration (NOAA) for the agency’s knowledge of the local climate. Cole’s data has since contributed to NOAA’s knowledge of the effect climate change has on agriculture, according to a 2010 letter from the organization.

And according to her temperature readings and snowfall measurements, “conditions are warmer,” Cole said.

Over the past 60 years, 45 Christmas days have had snow on the ground. In 1973, Lincoln County saw its first snow-free Christmas day since Cole started recording the weather in 1954. 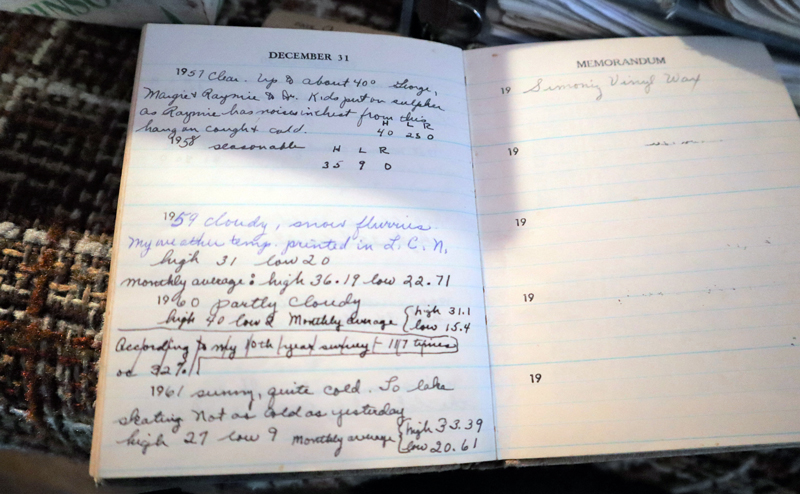 “They don’t know of anybody in the state of Maine who has been doing it as long as I have,” Cole said.

As she writes in her column for The Lincoln County News this week, by 1990 a non-white Christmas was a lot more common.

New England weather is infamous for being unpredictable, but the range of unpredictability has also increased in the time Cole has been recording local temperatures for NOAA.

On Jan. 4, 1981, Cole recorded the lowest daily high for temperature she’s ever tracked at -4 degrees Fahrenheit. The lowest temperature that day was -20 degrees.

But on Jan. 16, 2021, the daily high reached 45 degrees, according to data Cole collected that is now listed on the NOAA website.

Lincoln County is slated for a white Christmas this year, provided a chance of rain on Wednesday, Dec. 22, doesn’t wash away the four inches of snowfall from over the weekend. But the area saw temperatures higher than the average more often in the fall and winter months as the window for snowfall and ice shortens. 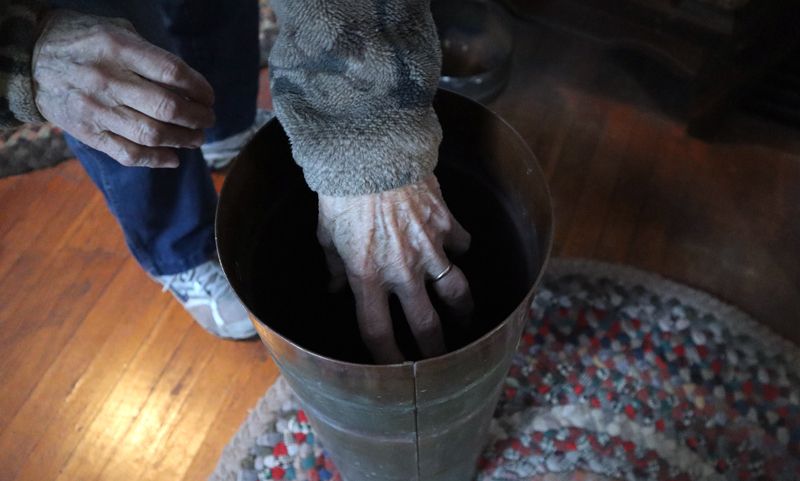 Arlene Cole demonstrates setting up her rain gauge for measurements to send to the National Oceanic and Atmospheric Administration. (Emily Hayes photo)

A week into November 2020, the temperature hit 71 degrees, while the highest temperature in November 1965 was 64 degrees, according to Cole’s data on the NOAA website.

With climate conditions warming over time, there is less snow on the ground. There is also less ice, and bodies of water that usually freeze over for the winter have been a slushy liquid.

Man-made ice rinks are a staple in the historically frigid Lincoln County winters, but some towns are now discouraged from taking the time to set up the base and tarp and maintain the rink when the window of time each year that it freezes over is short because of fluctuating temperatures.

“We just don’t get the frozen days like we used to,” Steven Hufnagel, executive director of Coastal Rivers Conservation Trust, said as conditions in Lincoln County get warmer. 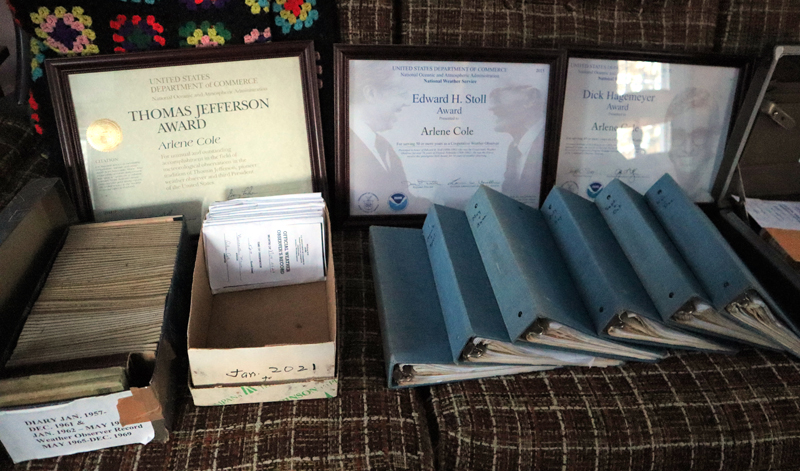 Newcastle resident Arlene Cole’s weather recordings from the 1950s onward, along with her national awards from the U.S. Department of Commerce for her long-time service. (Emily Hayes photo)

The organization typically builds an ice skating rink at Round Top Farm in Damariscotta, but the cost and effort on the part of volunteers gets to be too much with only seven or nine days of skating when it used to be 20 or more, Hufnagel said, so it won’t be built this year.

The sporadic freeze and thaw cycle also makes maintaining a rink more difficult. If a skate goes through the ice it penetrates the liner underneath, and the water leaks out, Hufnagel said. Slush from rain and snow mixing is also difficult to clear off the ice.

Marcus Benner, of the Waldoboro Recreation Department, said the ice skating rink he set up at the A.D. Gray school building five years ago only had six or seven usable days, but he hasn’t attempted one again until this year, and the problems with usability could have been due to the lack of easy water access at the school, he said. 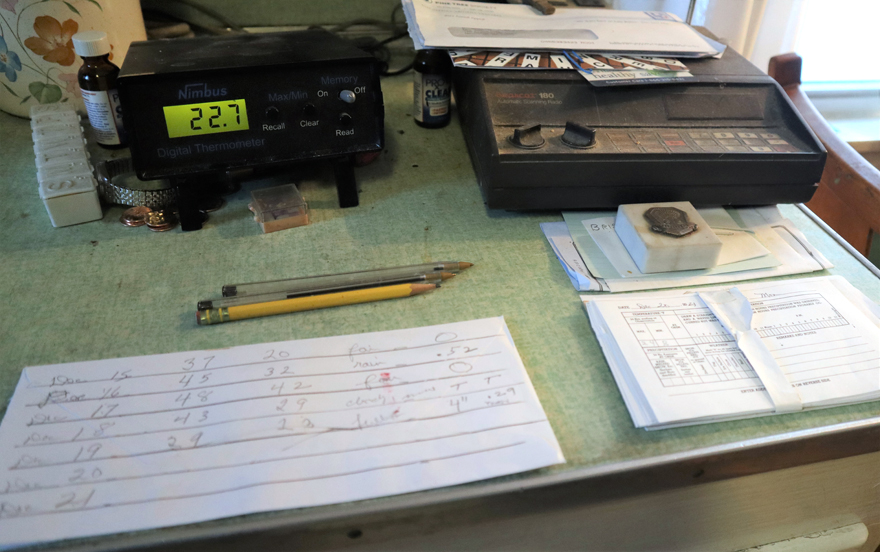 “Ice rinks are a ton of work in general,” Benner said, and larger cities like Portland have dedicated staff to maintain them. The rink behind the town office in Waldoboro is only available because of the volunteers helping to maintain it, he said.

“But in Maine you never do know what will happen with the weather,” Cole said.