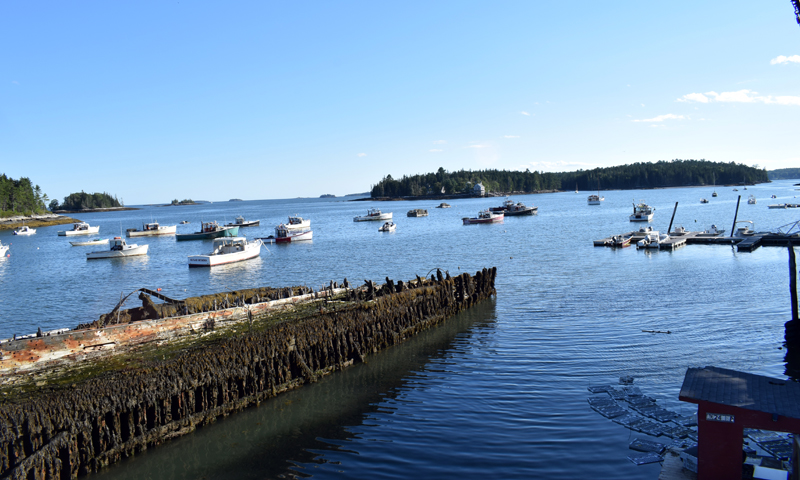 Lobster boats fill the harbor off Community Shellfish, a wholesale seafood dealer in Bremen. Shannon Harvey, a lobsterman who fishes out of Bremen and sits on the Zone D Lobster Council, said of lobstermen “hate” the new rules issued by the National Oceanic and Atmospheric Administration to protect endangered right whales. (Evan Houk photo)

Lobstermen in Lincoln County do not see anything good about the new restrictions to protect endangered right whales announced by the National Oceanic and Atmospheric Administration on Tuesday, Aug. 31.

Wotton said that if the rules actually protected the right whale, as they are intended, there wouldn’t be a problem with the new regulations.

However, he noted, there have been no right whale deaths attributed to Maine lobstermen. Most occurred in Canadian waters or were attributed to ship strikes.

The plan released by the federal agency includes a closure of over 950 square miles in Lobster Management Area 1 to traditional lobstering from October through January; requirement of more traps per buoy line to reduce the number of vertical lines; more color markings on lobster buoys; and the addition of a weak rope link that will allow a right whale to break free if entangled.

According to the National Oceanic and Atmospheric Administration, the Atlantic Large Whale Take Reduction Plan will reduce risk of right whale injury and death in the Northeast by 69%. These rules are the first phase of a 10-year plan that federal officials hope will ultimately reduce the risk to right whales by 98%.

The agency says that since 2017, 34 right whales have been killed, none linked to the Maine lobster industry. The most recent known entanglement in Maine lobster gear happened in 2004, but the whale survived.

The closure in Lobster Management Area 1, an area 30 miles off Midcoast Maine that stretches roughly from Mount Desert Island to Casco Bay, will allow only buoy-less or “ropeless” fishing, a new and experimental technology that brings lobster traps to the surface using smartphone signals, from October through January.

Wotton said this technology is not ready to be widely adopted by the lobster industry and it is cost-prohibitive.

“If it is going to work, it’s not going to be right now. It’s going to have to be used and experimented with,” Wotton said.

He heard prices of several thousand dollars for each end line, of which he would need 40 to participate in buoy-less lobstering. There will also be special permits required to engage in buoy-less fishing, increasing the time and effort needed to use the new technology.

The extra color markings and weak links in rope will cost lobstermen time and money. “You’re talking some big money to get in compliance,” Wotton said.

Shannon Harvey, a lobstermen who fishes out of Bremen and serves on the Zone D Lobster Council, said he does not fish in the area that will be closed, but it will affect him because lobstermen who do fish in the closed area will have to move their traps elsewhere.

“They hate it,” Harvey said when asked what lobstermen think of the new federal rules.

He suspects the state will sue the federal government once the new rules officially go into effect.

Wotton said that to modify the rules, the change would have to happen at the federal level, and he is skeptical that the rules can be changed at this point.

“The power to change this lies in Washington, D.C.,” he said.

Chuck Plummer, a South Bristol lobsterman who chairs the Zone E Lobster Council, said by phone that most of the smaller lobster boats are not set up to run 25-trap trawls, which will be required for any lobstering 12 miles offshore.

He said that the National Oceanic and Atmospheric Administration solicited input from the lobster industry over the years on how to reduce the risk to right whales, but he does not believe the industry’s contributions have been seriously considered.

Plummer said this may have eroded whatever trust he and the larger lobster industry had in federal regulators.

“I think they like to have meetings and they, quote-unquote, say, ‘we’re working with the fishermen,’ but I don’t think many of the fishermen’s ideas are ever taken into consideration,” Plummer said.