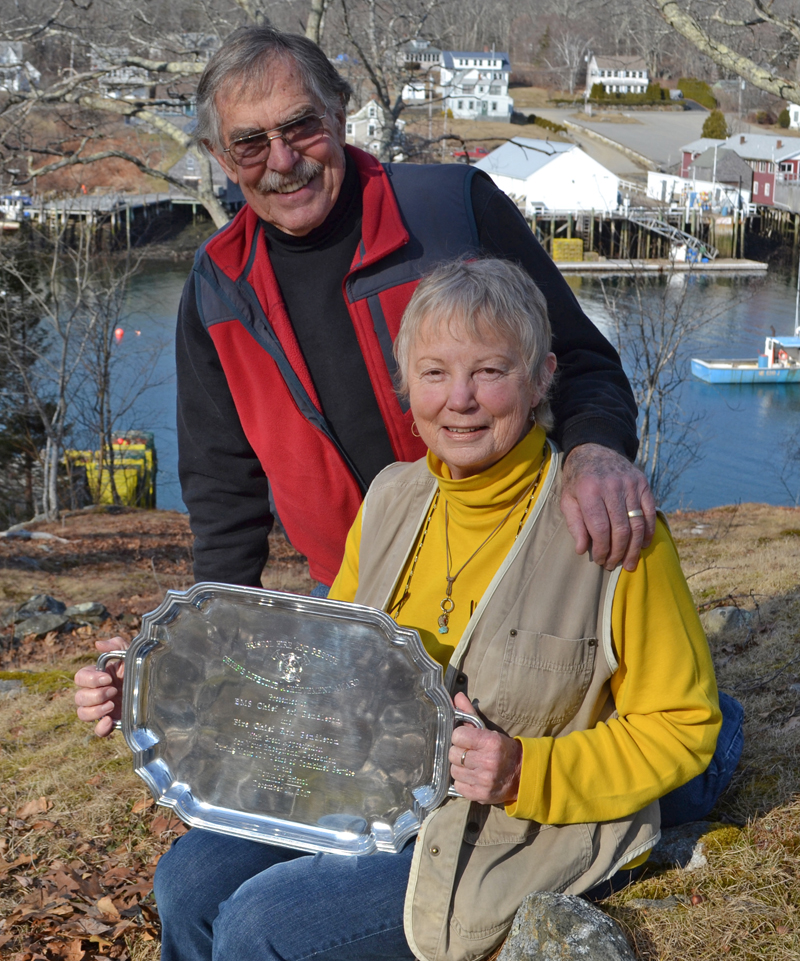 Ron and Jeri Pendleton pose for a photo outside their New Harbor home with a silver platter, a gift in recognition of their 100 years of service to Bristol Fire and Rescue. (Maia Zewert photo)

Bristol Fire and Rescue recently recognized a New Harbor couple for their combined 100 years of service to the department.

Ron and Jeri Pendleton met when they both attended school in Bristol; she was in sixth grade and he was in eighth grade. They “went together” throughout high school, and stayed together after graduation as Ron joined the U.S. Army and Jeri went to college. They married in 1962.

The fire service played a major part in both of their lives, even before they were old enough to join the department. Ron’s father, Robert “Bob” Pendleton, was one of the founders of the Samoset Fire Co. of Bristol in 1944, after a fatal house fire in New Harbor.

As his father ran out the door to the Bristol Mills fire station, Ron would be close behind, ready to roll up hoses and assist with other odds and ends. He officially joined the department in 1954, at the age of 15.

“That’s when we could join, so that’s what I did,” Ron said. “I didn’t think much of it, and I’ve been a member ever since.”

Jeri played a similar role in the department’s operations, as her father, Kenneth Sawyer, served as Bristol’s fire chief from 1950-1989.

“At that time, someone would call the house when they had a fire in order to get the fire department,” Jeri said. “Starting from when I was probably about 6 or 7, when someone called the house, my mother would send me down the road to the station to sound the siren to alert the town.”

Unlike Ron, Jeri did not join the fire department at 15 because “back then girls were not firefighters,” she said. Over time, however, the department evolved, and the decision was made to add emergency medical services to its offerings.

Jeri, who at the time was doing bookkeeping for her father’s plumbing and heating business in New Harbor, decided to get involved on a whim.

“I thought, ‘I’m here all day and I’m available, so why don’t I take the class?” Jeri said. “I remember I wasn’t particularly interested before, but I got bitten by the bug badly.”

Jeri officially joined the department in 1982, when it added emergency medical services. She remains the EMS service chief to this day.

In addition to their own devotion to Bristol Fire and Rescue, the couple’s three sons each joined the department when they turned 15 and remain active today. Their oldest son, Scott Pendleton, is active when not away for work, while their younger sons, Jared Pendleton and Brad Pendleton, serve as assistant chief and captain, respectively.

Between both of their fathers and all three of their sons, Ron and Jeri said they wouldn’t be surprised if there was another century of service to Bristol Fire and Rescue. “It truly is a family affair,” Jeri said.

Over their years with the department, Jeri and Ron have seen many changes in operations and improvements to efficiency in the fire service and emergency medical services, including the creation of the Lincoln County Communications Center. 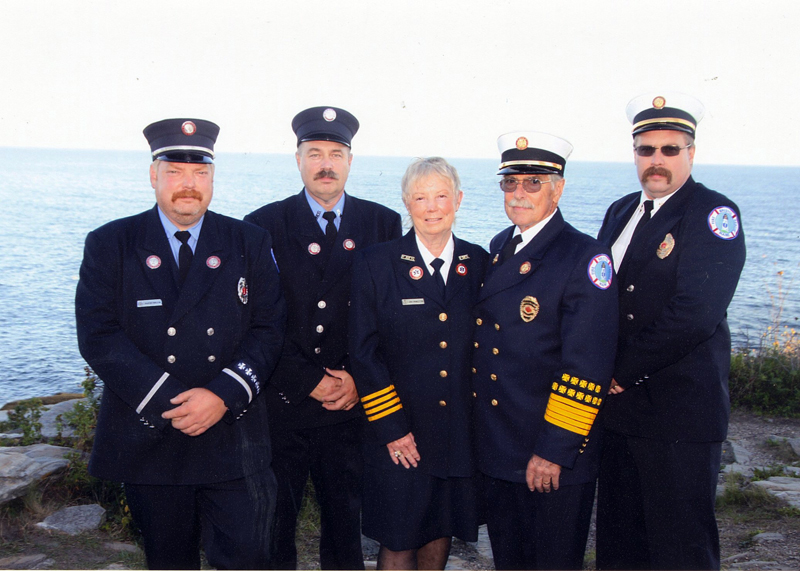 The Pendleton family’s history of service to Bristol Fire and Rescue dates back to the department’s first days. From left: Brad, Scott, Jeri, Ron, and Jared Pendleton. (Photo courtesy Ron and Jeri Pendleton)

Before the creation of the communications center, 10 households in the department had a “fire phone,” Jeri said. When someone had an emergency, they would dial the number and all 10 phones would ring.

“We would all pick up, get the information, and go,” Jeri said. “Going to a medical call, I was so concerned about getting it right. There was no one to call back. What you got on the phone and wrote down was all you had to go on.”

The creation of the communications center relieved some of the stress, as firefighters and first responders were able to glean additional details that could aid in the response.

“The communications center is a godsend,” Jeri said. “I know the difference between what we have now and what we had then, which was not having anyone to ask questions to or someone to get an answer from. We are so lucky to have the system we have.”

After Jeri’s father stepped down as chief in 1989, Ron served as fire chief for 20 years, until 2009. He remains active in the department. “I don’t have to be the head of it or in the front of the line. I just go where I’m needed and do what needs to be done,” he said.

The Pendletons did not think of the milestone until Bristol Fire Chief Paul Leeman Jr. recognized the couple for their combined century of service.

“I was just stunned, really,” Jeri said. “I had never thought about it or added up the years.”

“It seems like just yesterday, so I just thought, ‘Wow, it’s been that long?’” Ron said.

In recognition of their service, Leeman presented the Pendletons with an engraved silver platter, which now hangs on a wall in the Pendletons’ home.

“They really moved Bristol Fire and Rescue into the modern day in a time where you either move ahead or get left behind,” Leeman said. “Their commitment is extraordinary; they’re there to mentor everyone.

“I may be chief, but I depend on them and look up to them both,” Leeman said. “They set an incredible example, not just for the department, but also for the community.”

Both Jeri and Ron plan to stay active in Bristol Fire and Rescue for a long time.

“There’s no time in sight for us to leave,” Ron said. “Hopefully we have a lot more days and a lot more calls to go on.”