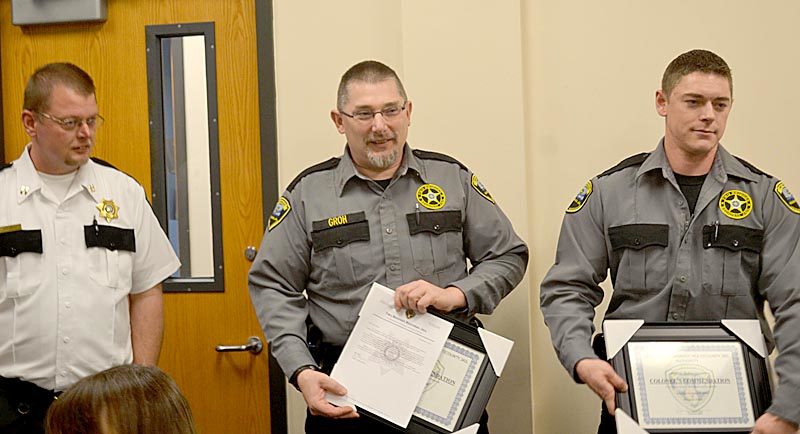 From left: Capt. James Bailey presents a Colonel’s Commendation to Darryl Groh and Dylan Quimby at Two Bridges Regional Jail in Wiscasset on Wednesday, Nov. 9. The commendations recognize the officers for their role in saving an inmate’s life in October. (Abigail Adams photo)

The staff members responsible for administering CPR, resuscitating the inmate, and saving his life were honored at the Lincoln and Sagadahoc Multicounty Jail Authority meeting Wednesday, Nov. 9.

Dylan Quimby and Darryl Groh were each presented with a Colonel’s Commendation for their role in resuscitating the inmate. The jail authority gave them a standing ovation.

While unable to attend the meeting, Kaleb Colbry and Shaun Robinson will also receive a Colonel’s Commendation for their role in the rescue, Bailey said.

The inmate had no pulse as a result of the medical emergency, but due to the quick actions of staff members, he was resuscitated before medical personnel arrived, Bailey said. The inmate was transported to the hospital and was listed in stable condition later in the week.

The inmate was returned to the jurisdiction of Kennebec County, which has a contract to house a certain number of inmates at Two Bridges.