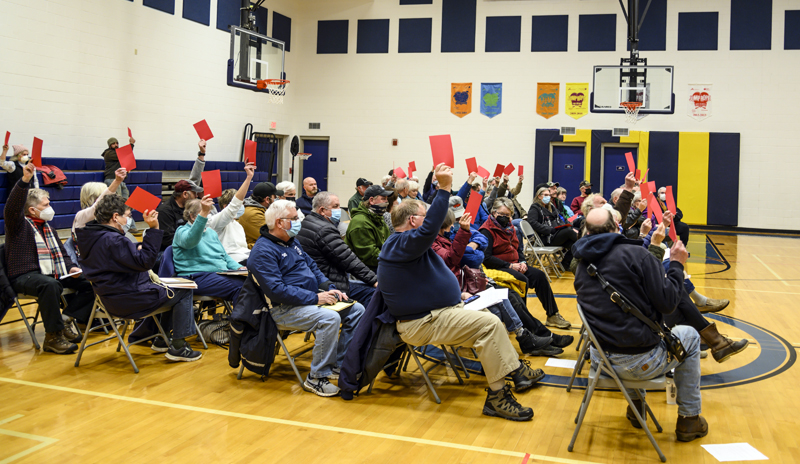 Jefferson residents voted in favor of retaining Waldoboro’s emergency medical services at least through June 2022, during a special open town meeting on Jan. 14.

Pay increases for EMS staff drove Jefferson’s cost for the Waldoboro service to $55,060 for the period from Jan. 1 to June 30, 2022. Improvements to the Waldoboro EMS pension plan will raise the cost further for the second half of the year.

“We had to make it a profession,” said Waldoboro Town Manager Julie Keizer. “That affected the communities we serve; we didn’t have a choice.” 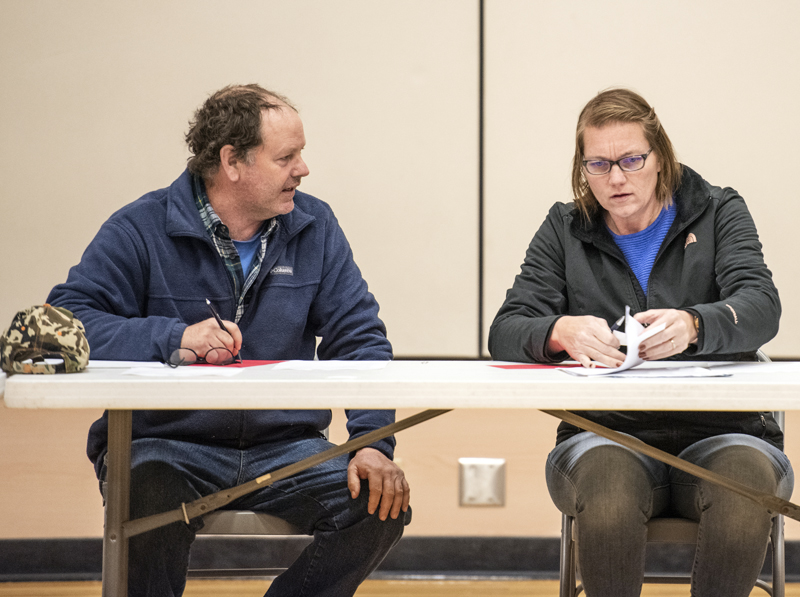 Selectmen Robert “Jigger” Clark and Pam Grotton review documents at the beginning of a special town meeting about skyrocketing costs for ambulance service in Jefferson on Jan. 14. Recent increases in pay and benefits for EMS workers has been a major issue impacting Lincoln County taxpayers. (Bisi Cameron Yee photo)

The Jefferson Board of Selectmen first learned of the increase in August 2021 and Keizer invited selectmen to attend meetings as early as Aug. 24, 2021.

The Jefferson board addressed the increase at the selectmen’s meeting on Oct. 3, and subsequently sent a request to Keizer via email for additional information. According to Jefferson Selectman Pam Grotton, they did not receive answers to their questions until Dec. 14.

The two towns did not meet to discuss the details and ramifications of the increase until Dec. 27. The increase took effect a few days later on Jan. 1.

The Jefferson board initially planned to decide the question of increased costs for emergency medical services at the town’s annual meeting in March 2022, but Waldoboro requested the vote be moved up.

Waldoboro EMS agreed to provide temporary service from Jan. 1 to Jan. 14, to give Jefferson time to post the required public notice for the meeting. 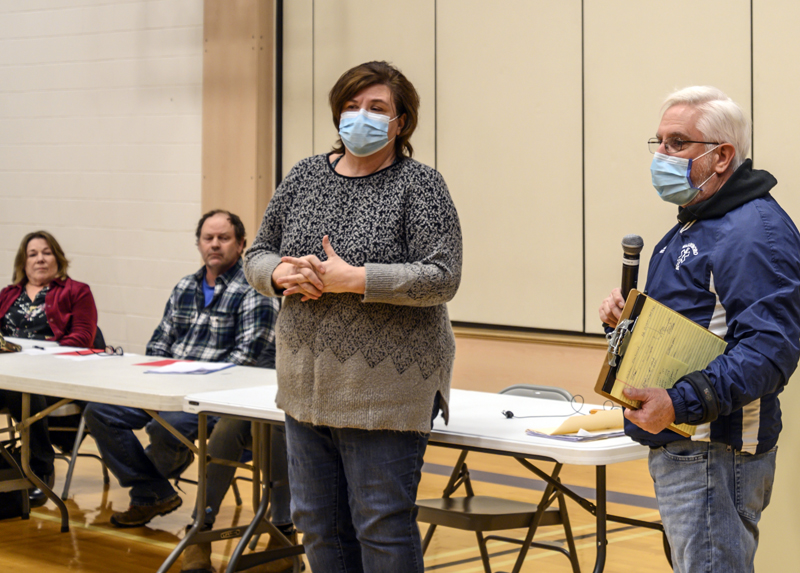 Waldoboro Town Manager Julie Keizer, center, and EMS Director Richard Lash, right, explain an increase in the cost of emergency medical services to residents in Jefferson during an emergency town meeting on the topic in Jefferson on Jan. 14. Waldoboro EMS responds to approximately two-thirds of the town of Jefferson. (Bisi Cameron Yee photo)

Waldoboro has provided EMS service to the northernmost two-thirds of Jefferson for the past several years. Central Lincoln County Ambulance Service covers the southern  third of the town.

During the special town meeting, Jefferson residents questioned Grotton and selectman Robert “Jigger” Clark about the increase. Greg Johnston, chair, was out of town and not in attendance. 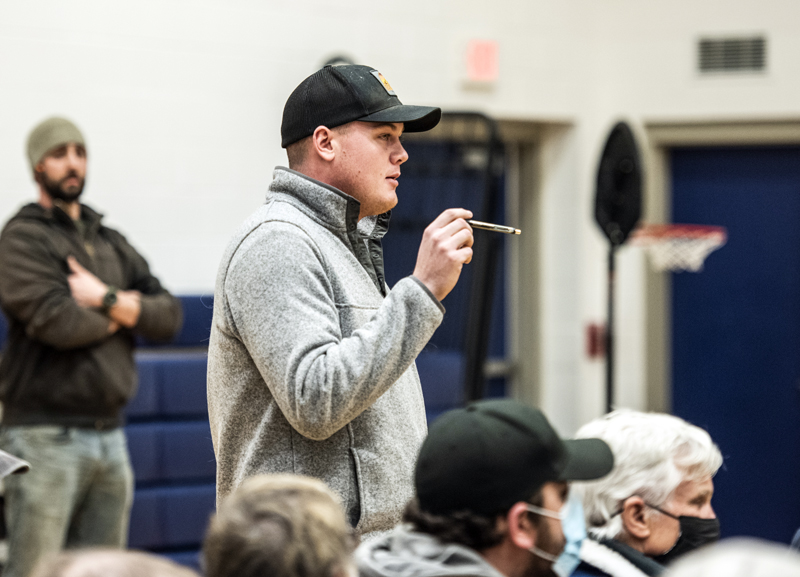 Brady Grotton questioned the timing of a special town meeting in Jefferson on Jan. 14. Grotton was concerned that the issue of EMS service was being decided after the Jan. 1 deadline imposed by Waldoboro, potentially placing Jefferson residents at risk. (Bisi Cameron Yee photo)

Keizer and the full complement of Waldoboro’s board of selectmen were also on hand to field questions, as was Waldoboro EMS Director Richard Lash.

Keizer told residents on hand at the meeting that Waldoboro’s budget for the EMS department is $938,812, which does not include an additional $300,000 for a recently beefed-up pension plan to boost recruitment and retention. The cost for the department is covered proportionally by the towns of Waldoboro, Friendship and Jefferson. 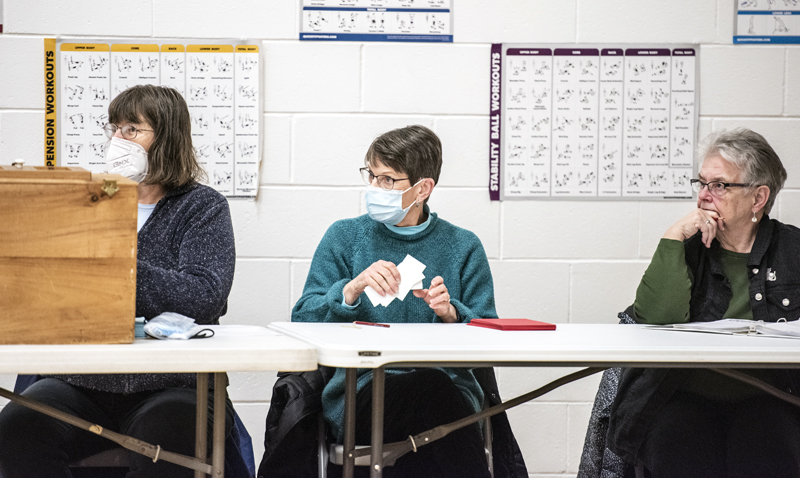 According to Keizer, Waldoboro EMS responded to 187 calls from Jefferson from July 1, 2020 to June 30, 2021. Of those calls, 71 did not require transport and were not reimbursable from private insurance.

“(Waldoboro is) absorbing that revenue loss…That has to stop,” she said.

Resident Jeremy Joslyn asked how many taxpayers reside in Jefferson, and suggested that based on a tax paying population of 2,000, the increase would cost each taxpayer $55. 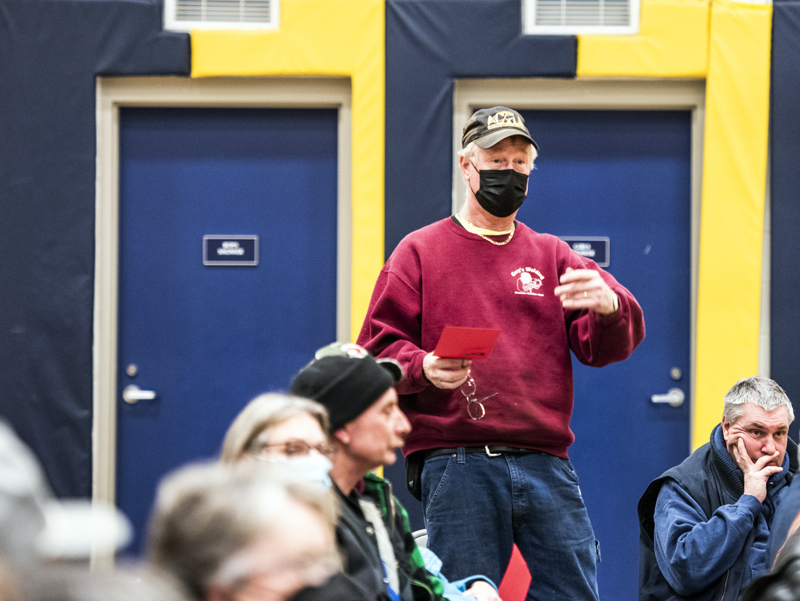 “I myself would pay $500 if I needed an ambulance,” he said. “When you’re doing CPR on your kid in the living room, money doesn’t matter.”

Resident Brady Grotton, an EMS worker and son of Selectman Pam Grotton, said “(Waldoboro) isn’t asking for an unreasonable amount of money for the type of service that they’re providing.”

He had more of an issue with how the situation was handled between the two town governments and the short notice, asking why the meeting was happening in January “to continue service for the year we’re already in.”

According to the motion approved at the meeting, the money needed to pay Waldoboro for the service will be raised through taxation.

Town Administrator Lynne Barnikow said there are some undesignated surplus funds that may be used to cover the bill until the funds in question have been appropriated. If used, those funds would then be replaced from the taxed amount. 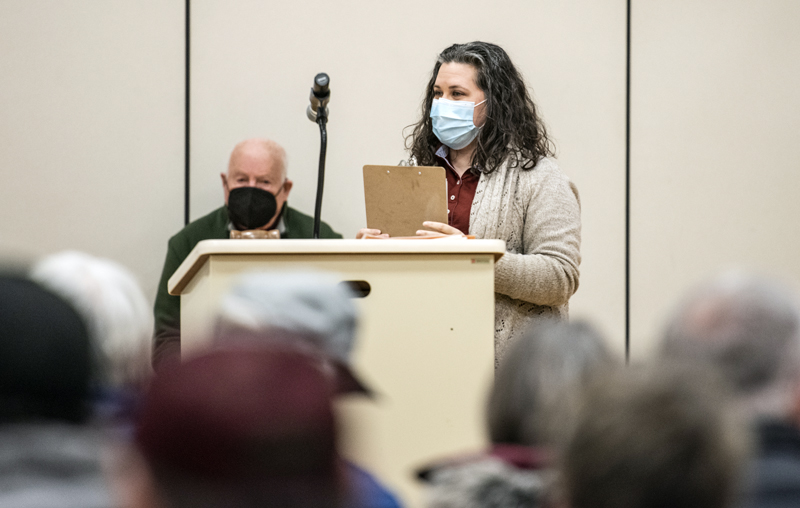 Town Clerk Grace Bull opens a special town meeting in Jefferson on Jan. 14. The meeting was called to address a $55,060 bill for six months of EMS services for the town. The prior bill was $7,000 per year. (Bisi Cameron Yee photo)

Jefferson does not currently have a reserve fund to cover the unexpected expense and Pam Grotton said use of American Rescue Act Plan funds would need to be voted on by residents; that money is currently earmarked for improvements to broadband service.

Resident Frederick Duncan, who said Waldoboro EMS saved his wife’s life, said he did not want Jefferson selectmen to be focused on cost over quality. He called Waldoboro’s service A-1. 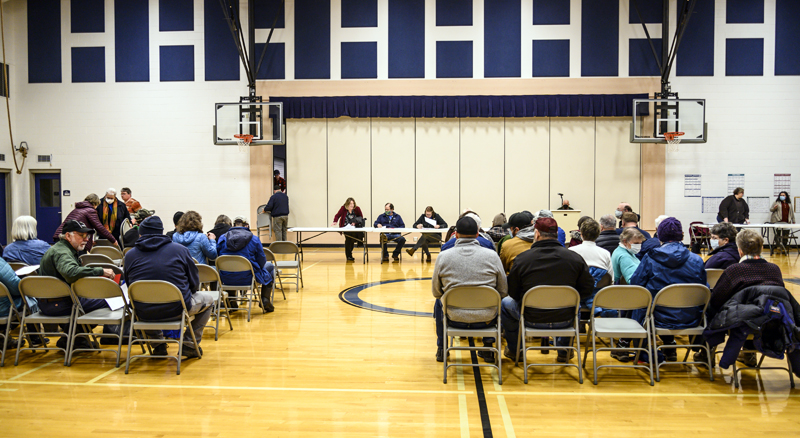 Residents gather in the gym at the Jefferson Village School to vote on a motion to maintain Waldoboro EMS as one of their ambulance providers in Jefferson on Jan. 14. Increased costs implemented by Waldoboro to recruit and retain staff has caused Jefferson’s bill for service to increase by over 1,000%. (Bisi Cameron Yee photo)

For Duncan, accepting the increase will ensure that Waldoboro is obligated to continue to respond to Jefferson residents. He asked if rejecting the motion would result in a complete loss of service: “If we don’t accept this and call for an ambulance, do you guys hang up the phone?”

Clark responded, “No. Guaranteed, you’re going to be covered somehow.”

Clark said selectmen reached out to both CLC Ambulance Service and the town of Union EMS department. CLC is not able to provide the additional coverage, and Jefferson selectmen have not yet had the opportunity to sit down with representatives from Union.

Pam Grotton said the town has options and selectmen did not want Jefferson residents to vote out of fear they will not have EMS response in an emergency. 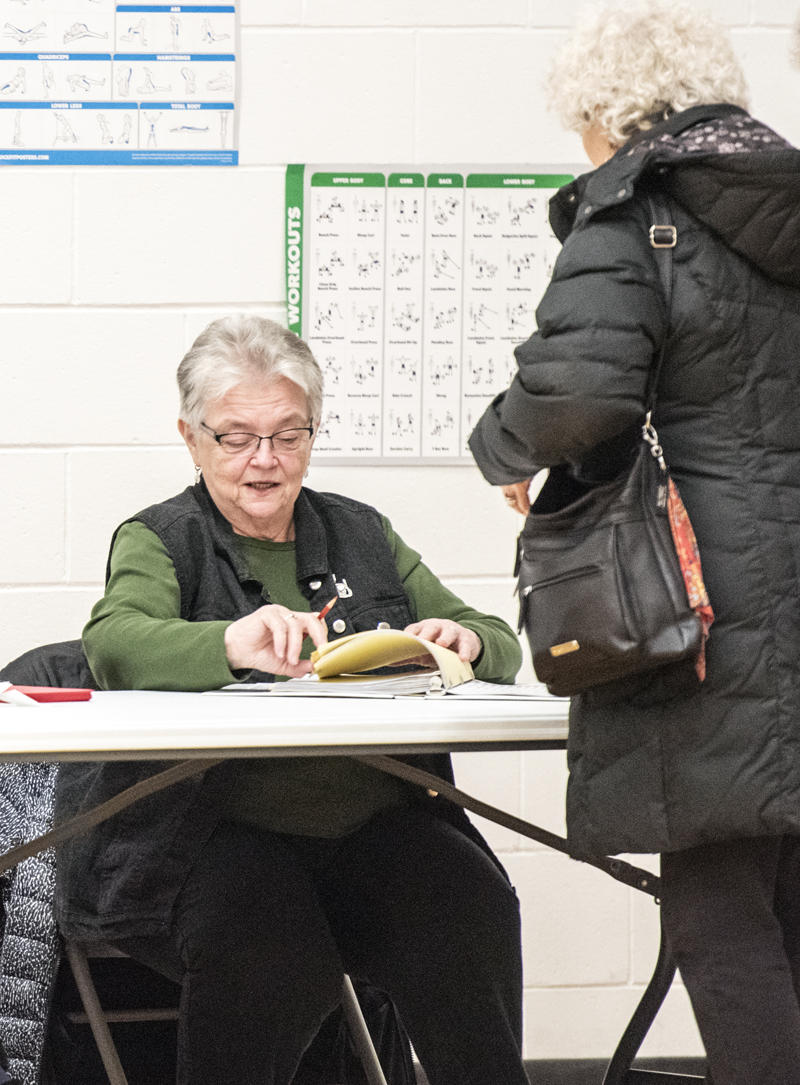 Brenda Williams, left, checks in a voter at a special town meeting in Jefferson on Jan. 14. The meeting was called by the town’s board of selectmen to vote on whether to accept a substantial increase in the cost of emergency medical services provided to Jefferson by the town of Waldoboro. (Bisi Cameron Yee photo)

Resident Wayne Parlin said he didn’t think emergency medical services should be a burden to property tax payers “as an easy solution to a much … larger problem that needs to be dealt with at the Maine Legislature.”

Brady Grotton agreed. “This isn’t a new issue,” he said. “And now with the COVID pandemic putting stress on everything, the cost of basically existing on the planet has gone up.”