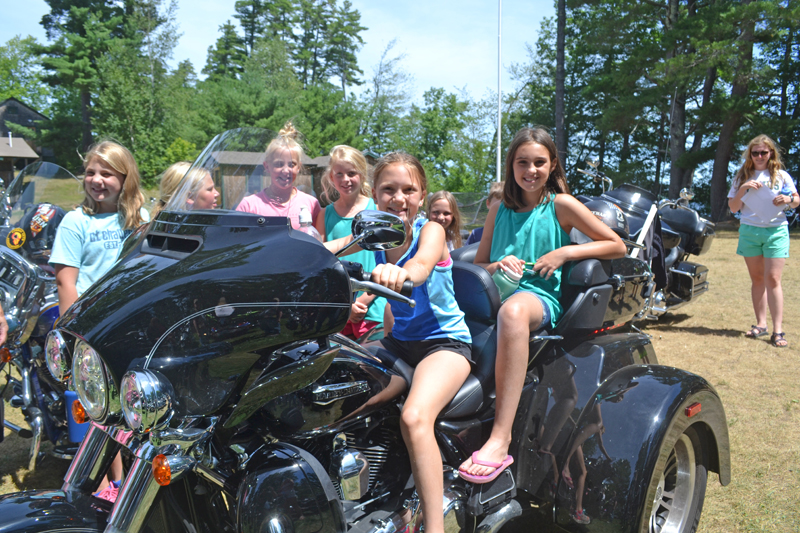 Leah Touchstone (left) and Grace Tillotson find out what it’s like to be on a motorcycle. (Remy Segovia photo)

The sounds of engines, jazz, and children’s laughter, as well as the smell of burgers, filled the air Saturday, July 29 at Wavus Camps in Jefferson during the Combat Veterans Motorcycle Association’s seventh annual benefit rally, Burgers, Bikes, & Rods.

The organizers of the event asked for a $20 donation for each bike and $10 for each passenger. Kieve-Wavus Education Inc. Development and Communications Director Russell Williams said there must have been at least 30 street rods, 100 motorcycles, and a total of 170 participants.

Buessiness donated food, beverages, and ice. With those donations, sponsors, raffle ticket sales, and the cookout, the benefit raised $10,000 to support the Kieve-Wavus Veterans Camp, according to ride coordinator Stephen Rendell. The camp holds seven different veterans camps throughout the year, free of charge to participants.

The camp’s veteran programs have been going on for nine years and include a variety of activities, such as rock-climbing, snowshoeing, pottery, jewelry-making, yoga, and massage, which aim to create a relaxing atmosphere.

The benefit began with a ride departing from L-A Harley Davidson in Lewiston around 10:30 a.m. and arriving at Wavus Camps, on Damariscotta Lake, around noon.

Local police made sure the ride went interrupted, blocking off sections of the route so those in the rally could “just keep riding,” said Williams.

About 100 campers from Camp Kieve in Nobleboro and 100 campers from Wavus Camps welcomed the riders by waving flags, then many of the campers got a chance to sit one of the many hot rods and motorcycles. 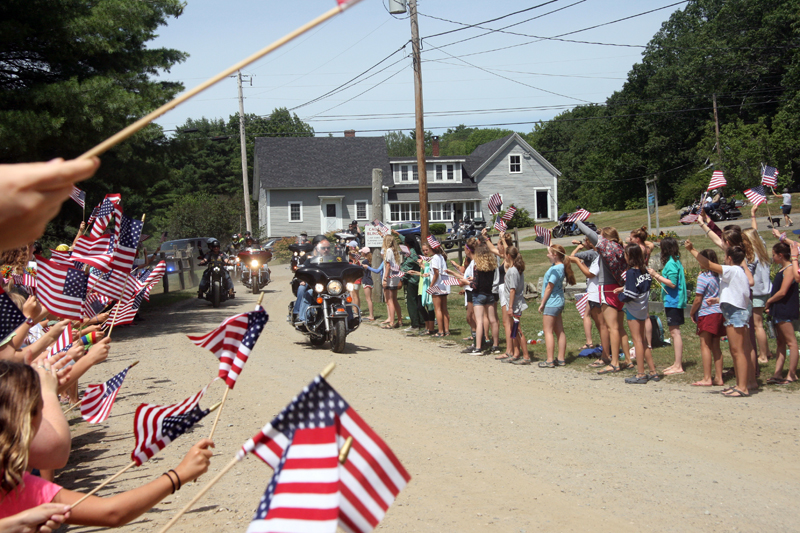 Other children played games, such as Frisbee, tag, and tetherball.

While the children were playing, members of the Combat Veterans Motorcycle Association, which includes veterans of the Vietnam War, the Gulf War, Iraq, and Afghanistan, talked with one another while wearing leather jackets with the association’s logo on the back.

Williams believes it’s important to continue supporting veterans saying, “It’s huge. Most of the guys in the association were in Vietnam, older vets. A number of them have been to our camps and really appreciate the help that we give.”

In the meantime, music was being performed by the Volunteers Jazz Band, a group of semi-retired professional musicians that performs for free for veterans.

After its summer camp programs for children wrap up, Kieve-Wavus will host a 9/11 Family Camp for the families and friends of those affected by the 9/11 attacks.

For more information about veterans programs, go to kieve.org/veterans or call 563-5172.