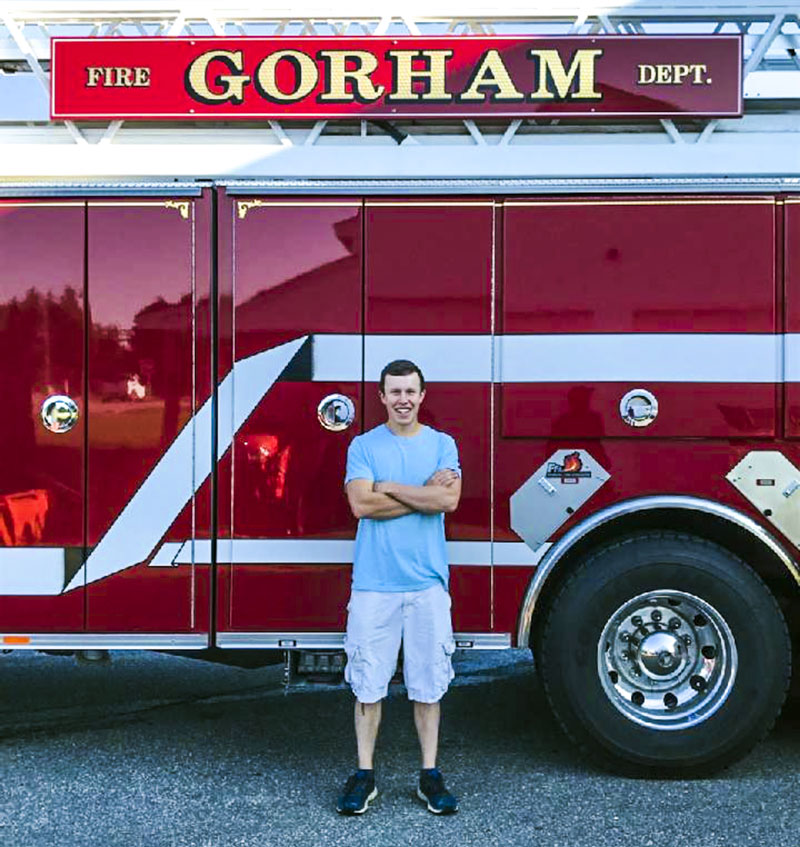 Oakley Oliver, of Jefferson, poses in front of a fire truck on his first day as a live-in trainee at the Gorham Fire Department. Oliver recently assisted in the rescue of an injured snowmobiler in Rangeley. (Photo courtesy Jen Oliver)

Rangeley Fire and Rescue Chief Mike Bacon gave Oakley Oliver the Chief’s Coin at the scene of the crash. The coin recognizes a citizen who goes above and beyond to help a fellow citizen. “He didn’t have to stop and help,” Bacon said.

On Feb. 14, while on a weekend snowmobiling trip with family, Oakley Oliver was waiting at an intersection when a passing snowmobiler informed the group of a crash ahead. Oakley Oliver, an emergency medical technician with the Jefferson, Gorham, and Standish departments, had a rescue pack on his snowmobile, so he went ahead of his group to see if he could offer assistance.

Oakley Oliver said he knew that “an accident, plus a guy in the snow, could add up to a potentially bad situation.”

Rangeley is known for winter sports. According to Bacon, the town has 143 miles of recreational trails that include mountainous areas, open terrain, and frozen lakes. Bacon said “there were a lot of accidents that day, a lot of sled traffic, congestion on the trails.”

According to Oakley Oliver, “there were thousands of people riding that weekend — trail conditions were good. There was a lot of powder, but the corners got icy, so it got bumpy real quick.”

A Rhode Island man in his 20s had fallen from his snowmobile, breaking his femur. He was in the snow down a steep embankment. Several people had stopped to help, but Oakley Oliver was the first person to arrive who had training in emergency medical care.

Oakley Oliver did a quick assessment, ensuring the man was stable, with no spinal issues. He described the patient as having serious but not life-threatening injuries.

He said his priority was to keep the leg immobile, since bone fractures can be close to arteries. He said there was no evident bleeding or bruising, so he chose not to expose the leg and examine it, because doing so would place the patient at risk for hypothermia.

Harold Schaetzle, a base supervisor for NorthStar Ambulance, which serves the area, was also off-duty and snowmobiling near the scene. Schaetzle said that when he arrived, Oakley Oliver gave him a report of the situation that was “pretty much dead-on.”

Schaetzle said there was a large group of bystanders, but Oakley Oliver had taken control of the scene. “He did a great job,” Schaetzle said. 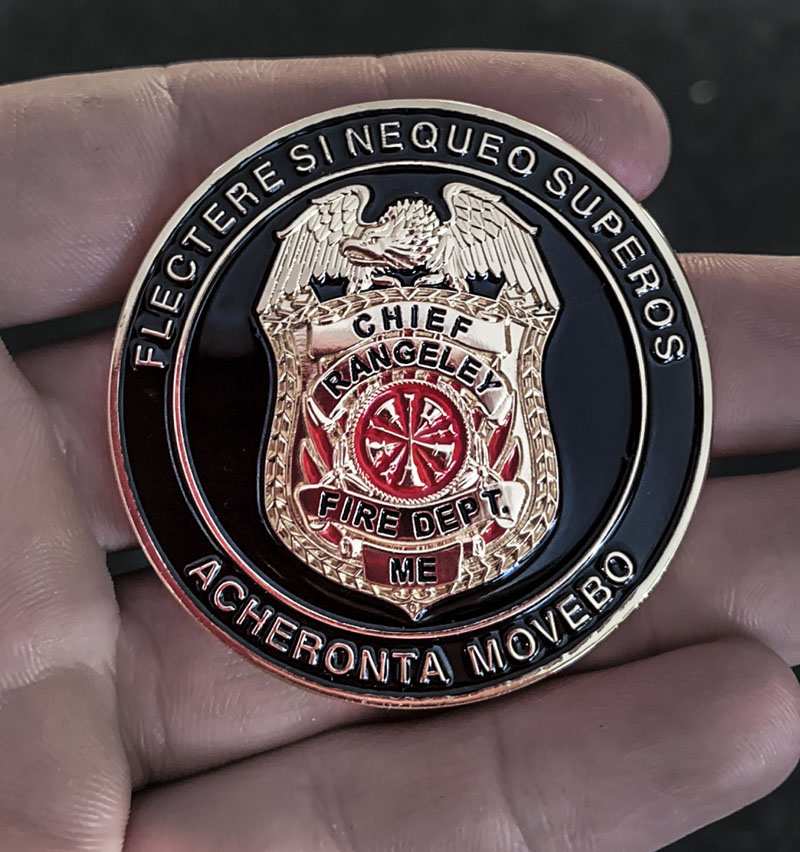 The “Chief’s Coin” given to Jefferson volunteer firefighter and first responder Oakley Oliver by Rangeley’s fire and rescue chief in recognition of Oliver’s assistance to an injured snowmobiler on Feb. 14. (Photo courtesy Jen Oliver)

Oakley Oliver waited with the patient until the Rangeley Fire and Rescue Department arrived. Rangeley EMTs placed the patient in a Stokes basket, a type of stretcher that can be pulled by a snowmobile.

When Oakley Oliver saw that he was the only person under 6 feet tall who was capable of riding with the patient, he volunteered to help with the transport.

“One thing I take away from this is, God makes everyone for a purpose,” he said. “I’ve always been the tiny kid, always small growing up. Maybe this is why he made me small.”

Oakley Oliver kept the patient conscious and stable and ensured there were no changes in his condition during the bumpy 15-minute ride over about 4 miles of icy terrain to the road. He kept a conversation going with the patient the whole time. “He had a great attitude — that guy was tough as nails.”

Oakley Oliver is currently in his second semester at Southern Maine Community College in South Portland, where he is studying fire science.

As part of the program, he was placed as a live-in trainee with the Gorham Fire Department. From there, he can also respond to calls in nearby Standish when needed.

He has also been a volunteer for the last three years with the Jefferson Fire Department, and still responds to calls during weekends home.

“I would not be where I am if I didn’t start there,” he said.

“There’s a sense of pride there,” he said of the Jefferson volunteers. “We do it because we want to help.”

When he turned 18, he went to the department in Jefferson to inquire about volunteering and “never had an application thrown at me so fast.”

“People don’t understand the number of calls that small departments like Jefferson get — in the range of 350 calls a year,” he said.

“He was hooked since day one, because of the people in the fire department,” said his mother, Jen Oliver. “He was so fascinated by the level of professionalism and dedication — it’s what drew him in and made him decide, ‘This is what I want to do.’”

Oakley Oliver wants to earn a position as a firefighter with a department that hires full time, but plans to stay involved with Jefferson throughout his life. “I love it,” he said. “There’s something about hometown pride.”

Dustin Oliver, Oakley Oliver’s father, said of his son, “he wants to make somebody’s worst day better if he can.”