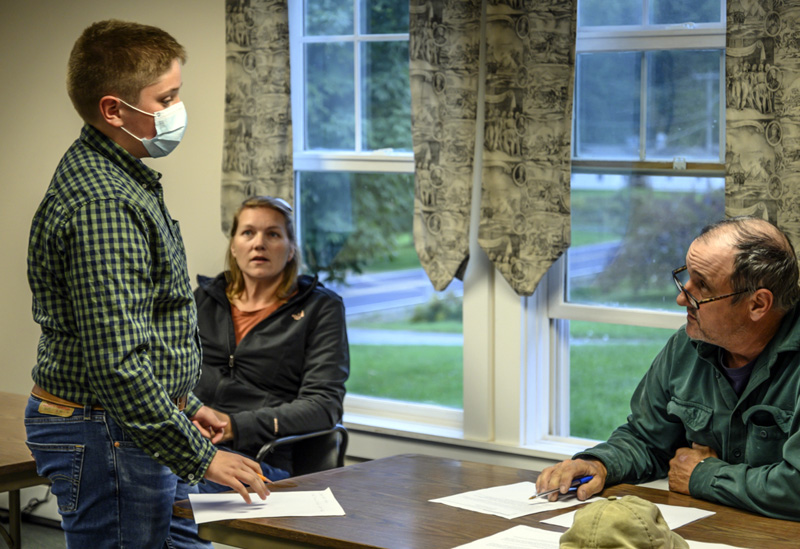 Gregory Demeritt, an 8th grader at JVS questions Greg Johnston, chair of the board of selectmen about road maintenance for a school project in Jefferson on Oct. 4. (Bisi Cameron Yee photo)

The town of Jefferson is facing a more than 1,000% increase in the cost of Emergency Medical Services service next year.

The board of selectmen was alerted to the proposed increase in its contract with Waldoboro EMS during its meeting on Monday, Oct. 3. The contract proposal from the Central Lincoln County Ambulance Service is yet to come.

The board received a letter dated Sept. 21 from Waldoboro Town manager Julie Keizer stating that Waldoboro EMS would have to make “significant changes” to recruit and retain staff and maintain its current level of coverage. Those changes would be reflected in the amount Jefferson is charged for Waldoboro’s coverage of the town.

According to the letter Waldoboro plans to move away from a per diem staffing model in favor of hiring full-time personnel with enhanced benefits.

The letter referenced the possible use of American Rescue Plan Act funds as one avenue to consider when determining the town’s next budget. According to Greg Johnston, chair, those funds are also being considered for use in improving broadband access. 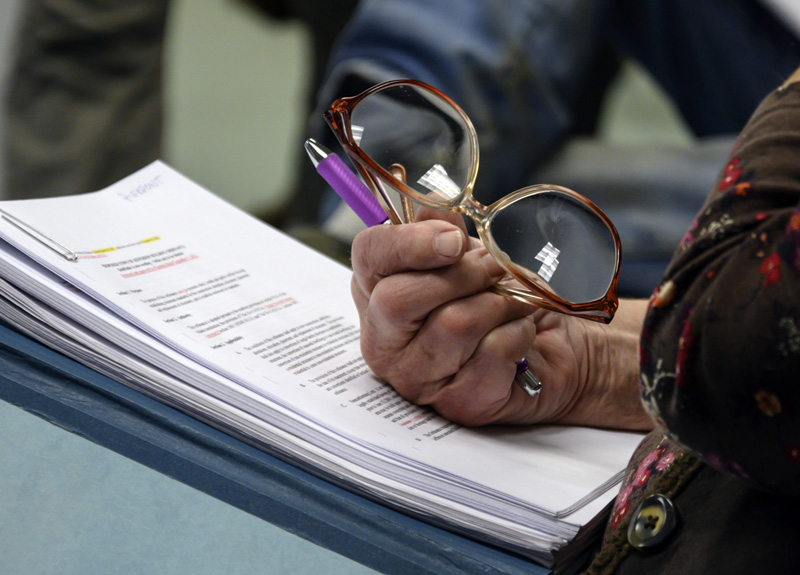 A hand rests on copies of ordinances proposed by the town’s planning board during a board of selectmen’s meeting in Jefferson on Oct. 4. The ordinances have been in development for over three years. (Bisi Cameron Yee photo)

According to Johnston, if Jefferson chooses not to continue its contract with either Waldoboro EMS or CLC, then Delta Ambulance out of Augusta would be the next option.

The planning board presented proposed updates to the building and shore land zoning ordinances that include changes to farm stands and accessory apartments, among other considerations.

According to the members of the planning board, the Department of Environmental Protection already reviewed the proposed shore land zoning ordinance for compliance.

These ordinances have been in the works for more than three years and the planning board has a goal of getting them on the March 2022 ballot.

The ordinances still need to be vetted by the town’s attorney and presented to residents at a public hearing. The board of selectmen said it would review the ordinances and contact the planning board with questions.

Dostie said a representative of the Maine Office of Marijuana Policy informed them that written permission from the board is required to operate their venture as a retail store. Dostie said that according to OMP, Elevation Station can sell marijuana products by appointment, as a delivery service, and even from the parking lot.

But the business cannot sell marijuana from the shelves alongside the associated merchandise they carry. 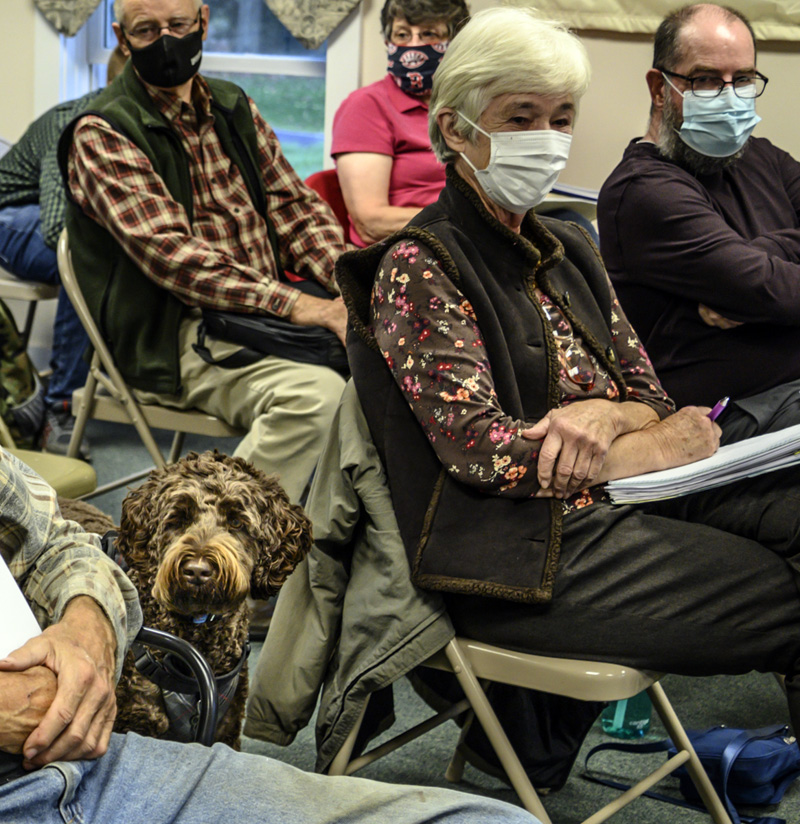 “Cello” joins members of the planning board during a board of selectmen’s meeting in Jefferson on Oct. 4. The planning board was on hand to submit proposed changes to the land use and shoreland zoning ordinances. (Bisi Cameron Yee photo)

Dostie said they may risk losing their caregiver license if they are not in compliance with OMP directives.

Dostie and Gagnon said they already invested over $40,000 in remodeling the building after talking with both the code enforcement officer and the planning board.

Dostie said a similar business already operates in the town without the restrictions that Elevation Station is facing.

According to Code Enforcement Officer Jarrod Pinkham, the state investigator said Elevation Station needs “some form of town approval” to operate as a retail store.

Johnston said that the board would have to research the question with the state and with the town’s attorney, and agreed to add Elevation Station to the next agenda.

The board accepted a bid from The Perfect Property to provide plowing services to the transfer station at a cost of $2,800.