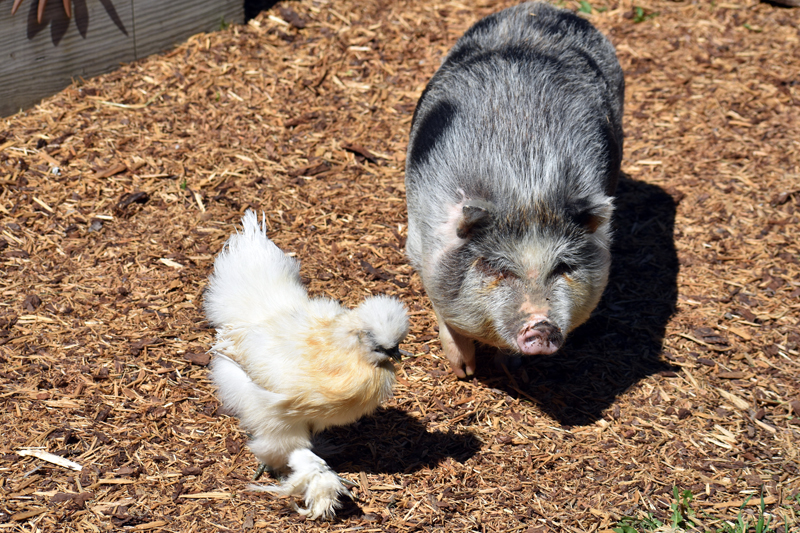 Maple the pig is rarely far from his friend Winnie, a silkie chicken. (Alexander Violo photo)

A small farm off Route 17 in Jefferson has become a haven for rescue dogs, goats, and pigs, including a pot-bellied pig who accompanies the farmer on errands.

At the farm on Circle K Lane, Scott Barbour and his significant other, Michelle Atwood-Beaudoin, treat the animals like family.

In addition to six rescue pigs, animals at the farm include three cats, six dogs, four goats, and three rabbits.

“All the animals have names and everyone gets along with one another,” Barbour said. The pigs at the property are Eddie, Flower, Groot, Maple, Muffin, and Violet.

The farmers’ love for animals led them to start a home for creatures in need. Barbour described himself as an advocate for farm animals and elderly house pets who require a substantial amount of care.

“My job as an advocate for these animals is to bring more awareness to the reasons why they are here in the first place … if you’re not prepared to care for an animal for their lifetime, you really should rethink your decision,” Barbour said.

He said animals such as pigs can start out as attractive novelty pets until, a year or two later, their owners realize the amount of money, time, and work that goes into raising the animals.

Barbour urges anyone who is considering adopting a pet to only do so with an understanding of the work each animal requires.

“Not just kids but adults need to look in the mirror and see if this is really what they want to do. The electrical bills and feeding bills, it all adds up,” Barbour said.

A former employee of Bath Iron Works, Barbour now owns the property-management business Camp Security Plus. Having great employees allows him to devote the necessary time to the animals’ care, he said.

“Everyone has a calling in life and I think, for me, this is it,” he said.

Barbour feeds and socializes with the animals every morning. “If I didn’t have them, I would still have my work, but when the job ends, it’s nice to have something else,” he said.

Barbour thinks all animals deserve to be treated well and that is what he and Atwood-Beaudoin try to do on their farm.

“You talk about unconditional love, that is what they give you and we try to give that to them in return,” Barbour said.

All of the animals Barbour and Atwood-Beaudoin care for at the property have unique personalities, but one of the most unique belongs to Maple, a pot-bellied pig whose best friend is a silkie chicken, Winnie, and who is as comfortable inside as he is out.

Maple is about 10 months old and weighs about 36 pounds. He gets along well with the dogs on the farm and behaves much like one. He often accompanies Barbour to work and on errands, to Camden National Bank, Hammond Lumber, and the post office. He travels without a leash or harness.

“He goes where I go. He is very personable and lives in the house,” Barbour said.

Maple is not the only rescue pig on the premises. Others include Violet, Flower, and Groot, a kunekune pig. Kunekune is a breed of domestic pig originally from New Zealand.

Barbour said Groot was quite sick when he came to the farm, but is healthy and happy now.

The pigs have come to the Jefferson property from a variety of situations, including some from owners who could not care for them. That includes Maple.

“A girl called up Michelle about a pig that was living in a basement for 18 hours a day, and I wanted to make sure to give him a good home,” Barbour said.

Maple was bound for a shelter when Barbour and Atwood-Beaudoin took the pot-bellied piglet in.

Barbour said the collection of animals began about nine years ago with a small Shih Tzu mix named Mya, who had been living with a hoarder. Flower and Wilbur, who has since passed away, were the first pigs to come to the farm.

“After that we just fell in love with pigs,” Barbour said.

Barbour and Atwood-Beaudoin described working with the pigs as therapeutic and a great stress reliever for adults and children.

They keep the pigs happy with healthy treats, including apples, carrots, cucumbers, romaine lettuce, watermelons, and seeds for the pigs to root for.

“It’s a bit expensive, but it’s worth it for the fresh food,” Barbour said.

The goats have a rock pile to explore and climb.

The farm has 3 acres of land, and Barbour said it would be nice to have more space, as he doesn’t like to turn away animals in need.

Barbour said someone recently approached him about a pig, Opal, who needs a home.

“I wish we had more room. When people call and we can’t immediately take an animal, it doesn’t make me feel very good. We’re always looking to expand and always looking for ideas from people on ways we can do that with what we are working with now,” Barbour said.

Barbour said it takes quite a bit of work to keep all the animals comfortable and healthy. In addition to Atwood-Beaudoin, he thanked All Creatures Veterinary Hospital in Rockport for assistance.