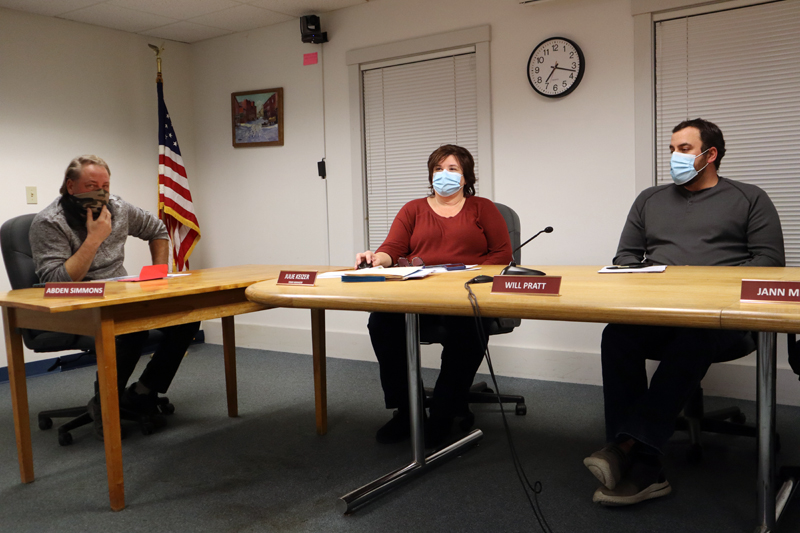 The Waldoboro Board of Selectmen discuss extending emergency medical service to Jefferson until Jan. 14 while the town works to either approve the cost increase or seek service from another agency during its meeting Dec. 28. From left: Chair Abden Simmons, Town Manager Julie Keizer, and Selectman Will Pratt.(Emily Hayes photo)

The Jefferson Board of Selectmen has yet to approve spending on the new budget for the emergency medical service the town contracts to receive from Waldoboro, despite an initial deadline of Friday, Dec. 31.

The Waldoboro Board of Selectmen voted on Dec. 28 to give the town of Jefferson two more weeks, or until Jan. 14, to decide whether it wants to continue to contract with Waldoboro for emergency medical services and pay the higher cost.

After Jan. 14, Waldoboro Emergency Medical Services will no longer service the northern portion of Jefferson, unless the town is actively working to allocate funding to the ambulance service or find a new provider for the service.

Jefferson contracts with both Waldoboro and Central Lincoln County Ambulance Service because its own fire and rescue is not able to provide advanced life support or to transport residents to the hospital. Waldoboro covers roughly two-thirds of Jefferson to the north, and CLC Ambulance covers the southern section of town.

CLC Ambulance is a private nonprofit service, but Jefferson began contracting with Waldoboro as well because it is closer and cuts down on the amount of time patients have to wait for medical assistance.

Both ambulance services are offering higher pay and enhanced benefits to retain workers amid a statewide EMS staffing crisis, raising expenditures for both agencies.

“I know it’s a hard pill to swallow,” Waldoboro Town Manager Julie Keizer told the Jefferson Board of Selectmen during its meeting on Dec. 27, “but it’s literally a matter of life and death. We provide a service, and there is a cost to that service.”

December is the first month since the start of the pandemic that Waldoboro EMS has had a full schedule of workers due to the pay increase, Keizer said.

Jefferson Board of Selectmen Chair Greg Johnston said they have nothing against the pay increases for workers, but he wants to understand the way Waldoboro EMS plans its budget and the costs to the towns it services.

“There’s a misconception we make money off of the EMS service somehow,” Keizer said. Despite the budget increase to $1.4 million, revenue has remained steady at about $600,000 per year.

She originally notified the town of Jefferson about the increase in the cost of Waldoboro’s EMS services in August, which the Jefferson selectmen discussed during their Oct. 3 meeting.

The town of Jefferson sent emailed questions to the town of Waldoboro over two months ago before inviting Keizer to meet with the board a few days before the deadline and explain the reasoning behind the increase.

Jefferson Selectman Pam Grotton said the town did not receive answers to the questions until Dec. 14, which is why the board waited to discuss the budget during its next meeting on Dec. 27.

On Aug. 18, Waldoboro invited the Jefferson selectmen to its select board meeting on Aug. 24 to discuss the budget increase, but they did not attend. Representatives from the other towns Waldoboro services, such as Friendship, were given the same information and met with the Waldoboro selectmen to understand and approve the changes, Keizer said.

She was originally supposed to meet with the Jefferson Board of Selectmen on Oct. 18, but she was called and told not to attend because Jefferson would be emailing its questions to her, Keizer said.

Some of the confusion was tied to the fact that Jefferson does its budget on a calendar year of January to December, but Waldoboro plans its budget on a fiscal year of July 1 to June 30 of the following year, Keizer said.

Tensions rose at the Jefferson meeting on Dec. 27 as selectmen asked Keizer, who was in attendance, for further breakdowns of the numbers and questioned why Waldoboro did not incorporate money it was making in revenue back into the cost to the towns it services, lowering their costs.

But Waldoboro EMS manages its budget based on expenditures, which means towns it contracts with, such as Jefferson, are not charged for capital costs like the two new ambulances the town purchased at around $200,000 per truck.

“They want to share in the revenue, but they don’t want to own their outstanding costs,” Keizer said.

From July 1, 2020 to June 30, 2021, there are 71 unpaid calls in Jefferson, totaling a cost of $41,000 that Waldoboro taxpayers absorbed. Since then, the number of unpaid calls has risen to 181 in Jefferson. If there is a refusal of transport, Waldoboro absorbs the cost of the call.

These costs were also not included in the $110,000 budget cost to Jefferson, but the current model is not sustainable, and needs to be changed, Waldoboro Selectman Bob Butler, who also attended the meeting in Jefferson, said.

“Who are we on the board to say our taxpayers need to pay that,” Chair Abden Simmons said.

The breakdown of the costs is still unclear to the Jefferson Board of Selectmen, and they want more information to bring to residents before a town vote on whether to pay the increased budget or seek out a different ambulance service. Grotton said the board of selectmen can’t go to the town without an explanation.

The Jefferson selectmen want to bring the issue to residents during the annual town meeting in March, but the Waldoboro selectmen say they want an answer now, because it is their taxpayers who will be paying for the cost of servicing Jefferson for three months if the residents of Jefferson choose not to approve the budget increase.

“But we’ve been very clear from the beginning that this is not a negotiation, this is the cost for us to provide the service,” Keizer said.

During the Jefferson meeting, Keizer suggested the town allocate American Rescue Plan Act funding to paying for the ambulance service until the town meeting in March, but the board said it had already earmarked the money for other things, such as broadband.

According to a town ordinance, Jefferson must give 10 days’ notice before a special meeting for a town vote on an emergency issue, meaning the board of selectmen will need to take immediate action or risk losing emergency medical services for a large portion of town.

Keizer invited the Jefferson selectmen to the Waldoboro selectmen’s Dec. 28 meeting, but they did not attend.

If Jefferson starts to take action in setting up a special meeting for the town to vote, the Waldoboro Board of Selectmen said it would consider extending the Jan. 14 deadline again. But if no action is taken, Waldoboro EMS will halt services to the majority of Jefferson.

“We want to do whatever we can for the people that need assistance,” Waldoboro Selectman Jan Griesenbrock said.

Regardless of Jefferson’s decision, the town will be held responsible for paying whatever services are provided in those two weeks before Jan. 14, according to the motion passed by the Waldoboro selectmen.

“I think our voters will approve it,” Jefferson Selectman Robert “Jigger” Clark said.

Keizer said she will invite the Jefferson Board of Selectmen to Waldoboro’s next board meeting on Tuesday, Jan. 11 at 6 p.m. in the Waldoboro town office.