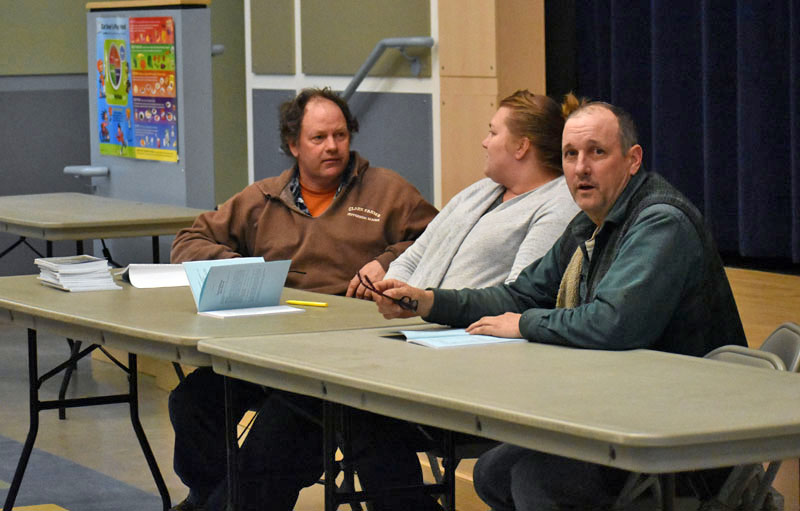 The Jefferson Board of Selectmen discusses the upcoming annual town meeting by referendum during a public hearing at Jefferson Village School on Thursday, March 8. From left: Jigger Clark, Pamela Grotton, and Gregory Johnston. (Alexander Violo photo)

The Jefferson Board of Selectmen held a public hearing Thursday, March 8 on the warrant for the upcoming annual town meeting by referendum.

The selectmen read and discussed the warrant articles, and fielded questions on changes in the budget from a small crowd of citizens.

Town Administrator Lynne Barnikow said article 4 of the town warrant, administration of local government, saw an increase in this year’s budget due to the inclusion of a full year’s salary for a town clerk, whereas the last budget included six months of salary for the position.

The selectmen and the Jefferson Budget Committee unanimously recommended the budget.

Articles 4 and 5 were recommended unanimously by the three selectmen and nine budget committee members.

Article 6, covering roads and highways, including general road repair, winter maintenance, and snowplowing contracts, stands at $365,180, an increase of $3,000 or 0.83 percent.

Responding to questions regarding the town’s snowplowing contract, Selectman Gregory Johnston said the municipality has one more year on its current agreement with Gordon Libby, of Waldoboro.

Article 7, unclassified expenses, is the same amount as last year. The selectmen are looking to raise and appropriate $10,808 for unorganized cemeteries, the library, Memorial Day events, and scholarships.

The selectmen and budget committee unanimously recommended articles 6 and 7.

Johnston said this year’s warrant has a new article, Article 16, asking voters to authorize the town to appropriate funds from surplus, not to exceed $200,000, for the repaving and reconstruction of town roads.

Johnston said the intent of the request is to shore up town roads and accomplish more paving than possible through state block grant funding.

“We want to keep up with the roads. This is a good way of catching up,” Johnston said.

Selectman Jigger Clark echoed Johnston’s statements and said that with more funds, the town could finish paving projects in one summer instead of taking multiple years to finish roadwork.

“If we had more money in the last budget, we could have finished Somerville Road last year,” Clark said.

The selectmen estimated that more than half of Somerville Road was completed last year and roads where future work is possible include Goose Hill Road.

Article 17, covering the raising and appropriation of funds for the Jefferson Fire and Rescue Fire Truck and Rescue Reserve Fund, asks voters for $30,000.

Johnston said last year’s request was $20,000 and this year’s higher request reflects the rising cost of fire and rescue apparatus.

“Trucks keep going up in price. We are just trying to get funds up to use when we need to,” Johnston said.

Article 28, funds for the Jefferson Area Community Food Pantry, totals $1,500. Last year’s request was $1,000. The pantry is asking for more funds in an effort to provide adequate services to the people it serves.

Copies of the warrant are available at the town office.

Prior to adjournment, Johnston informed residents that the town is looking for people to join the planning board.

Johnston called for interested individuals to submit their names to the town office.

“The board will appoint who we want, but we need people who are interested,” he said.

Jefferson Planning Board Chair Ralph Martin does not want to continue as chair and no other board member wants the job, according to Barnikow. The board also needs alternate members.

“It’s becoming really hard to find people to serve on the planning board,” Barnikow said.

“He’s doing a great job. Every week he has questions and makes suggestions regarding conflict between ordinances and state laws,” Barnikow said.

Barnikow said Vinal, of Bremen, also works as the code enforcement officer for Edgecomb and Newcastle.