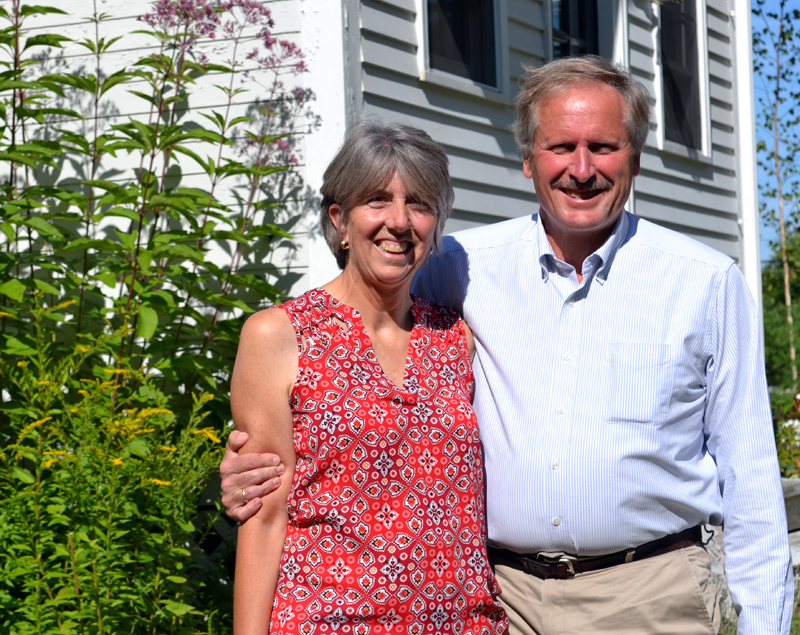 Anne and Robert Cekuta at their home in Jefferson on Aug. 23. (Abigail Adams photo)

Throughout the course of Robert “Bob” Cekuta’s nearly 40-year career in the foreign service, he and his family have been stationed in Yemen, South Africa, Austria, Germany, Iraq, and Afghanistan. Cekuta now holds the post of U.S. ambassador to Azerbaijan, a position he has held since 2015.

While Bob Cekuta and his wife, Anne Cekuta, spend the bulk of their time in Baku, Azerbaijan’s capital city, and have their primary residence in Washington, D.C., Jefferson “is our home base,” Anne Cekuta said. She spent summers in Jefferson when she was growing up, and the couple and their three adult children now gather there for vacations, holidays, and special occasions.

Bob Cekuta’s work in the U.S. Department of State has taken the family across the globe, into war-torn countries and developing nations. However, Maine has never been far away. Whether colleagues in the foreign service or citizens of other countries, they often encounter people with connections to the Midcoast.

“Maine has a connection to the rest of the world. Just scratch the surface and you’ll find one,” Bob Cekuta said. “The world is a lot more connected than you would think.”

Originally from Rochester, N.Y., Bob Cekuta always had an interest in international affairs. “I wanted to be involved and have an impact,” he said. He earned an undergraduate degree from Georgetown University’s School of Foreign Service and a master’s degree from the Thunderbird School of Global Management.

Upon graduation in 1978, he joined the State Department’s foreign service. For the next 37 years, he held various positions in Washington and in U.S. embassies overseas, including senior positions focused on energy security and economic development.

He was stationed in Baghdad during the Iran-Iraq war, in Vienna when the Berlin Wall fell, and in Albania during the unrest of the late ’90s. He oversaw the economic and development activity of the U.S. embassy in Kabul, Afghanistan in 2009-2010, worked in economic affairs in embassies in Germany and Japan, and, prior to his current position, served as the principal assistant secretary in the State Department’s Bureau of Energy Resources.

His position as U.S. ambassador to Azerbaijan is like no other he has had before, Anne Cekuta said. U.S. ambassadors and their families have influence and responsibility in the countries where they serve, she said, as countries look to the U.S. for answers.

The U.S. has “a special role” in diplomacy, Bob Cekuta said. Azerbaijanis “care a lot about what the U.S. thinks.”

In December 2014, the U.S. Senate confirmed President Barack Obama’s nomination of Bob Cekuta as ambassador to Azerbaijan. In February 2015, he began his new position. He has served as ambassador under the Obama administration and Secretary of State John Kerry, and under President Donald Trump’s administration and Secretary of State Rex Tillerson.

Unlike previous positions, in which he focused on a specific issue, as ambassador Bob Cekuta is responsible for every aspect of the U.S. relationship with Azerbaijan.

Azerbaijan is a small, oil-rich country sandwiched between Russia, Iran, Armenia, Georgia, and the Caspian Sea. While Azerbaijan has the second-largest Shiite Muslim population in the world after Iran, the government is secular, has strong diplomatic ties to Israel, and is an important counterterrorism partner, Bob Cekuta said. 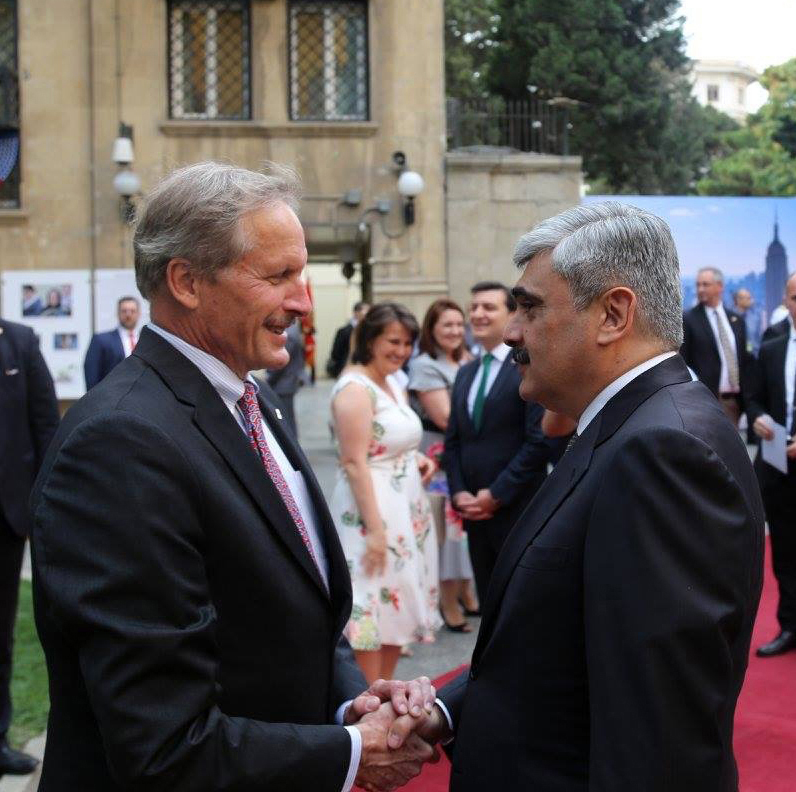 The country is roughly the size of Maine, but contains nine of the world’s 11 climate zones. While it shares a border with both Iran and Russia and is surrounded by hotbeds of terrorism in the Caucasus Mountains, the greatest threat of conflict in Azerbaijan is with Armenia, Bob Cekuta said.

Azerbaijan is one of a few countries where Russia and the U.S. are actively working together to solve a regional conflict, he said. The conflict began in 1988 when the ethnic Armenians of the Nagorno-Karabakh region voted to leave Azerbaijan and join Armenia.

The situation escalated into a full-scale war between Azerbaijan and Armenia in the early 1990s, which left 38,000 dead, according to the Uppsala Conflict Data Program, a Swedish research institute on armed conflicts.

Fighting came to an end in 1994 with Armenia in control of the Nagorno-Karabakh region and several surrounding districts – what Azerbaijan considers 20 percent of its territory. More than 20 years later, there are still an estimated 650,000 internally displaced people in Azerbaijan as a result of the conflict, according to the BBC.

The U.S. has worked with France and Russia to find a diplomatic solution to the conflict, Bob Cekuta said. Ambassadors “have the power to convene,” or bring the leaders of the two nations together, he said. Ultimately, however, it is up to the leaders of Armenia and Azerbaijan to agree to a solution.

Azerbaijan is also the center of one of the largest capital projects in the oil and natural-gas industry – the approximately $40 billion Trans Adriatic Pipeline. The project will connect the gas fields of the Caspian Sea to the European Union, increasing the energy security of the Western world, Bob Cekuta said.

Azerbaijan has “a large oil and gas industry. Now we’re working on getting the gas supplies out,” he said.

Azerbaijan’s airspace is also crucial to the U.S. military’s access to Afghanistan, as Pakistan is one of the only other access points for the U.S., he said.

Bob Cekuta’s days in Baku are filled with meetings, appointments, events, and constant communication with his superiors in D.C., which he summed up as “work.”

Anne Cekuta has used her status as the ambassador’s wife to increase the impact of her charitable work.

Anne Cekuta is the president of an organization of ambassadors’ spouses, which engages in a variety of philanthropic activity. She works closely with organizations that help Afghan refugees in Azerbaijan access education and public services.

She has helped open medical clinics, and is working toward developing an autism program, which currently does not exist in Azerbaijan. The area where she has made the greatest difference, she said, has been in establishing and promoting recycling programs.

Recycling is a relatively new concept in Azerbaijan, and the U.S. embassy took the lead in setting up a program that is now expanding beyond the embassy walls, she said. As a nod to this emphasis on recycling, the Christmas tree outside the U.S. embassy last year was made out of Coca-Cola bottles.

While immersed in a foreign country with a different language, political system, and culture, the Cekutas still encounter connections to Maine. Through the Art in Embassies program, ambassadors and their families select artwork to decorate their residences.

The program contributes to representing U.S. culture overseas, Anne Cekuta said. There are pictures of Cadillac Mountain and Katahdin in their home in Baku. Another picture, of a maple tree being tapped, always sparks questions from Azerbaijanis.

The Cekutas have come across Azerbaijani citizens who are familiar with Maine artists and the Midcoast, they said.

The experiences Anne has had throughout Bob’s career in the foreign service have given her “a different understanding of life,” she said. “You see the haves and have-nots. Just seeing it is real exposure.”