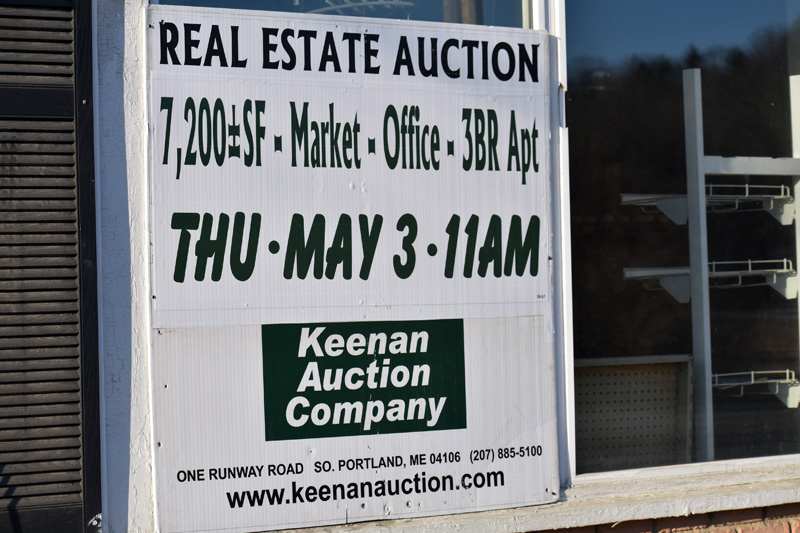 A sign in the window of Jefferson Market advertises an upcoming foreclosure auction for the property. (Alexander Violo photo)

The Jefferson Market, the grocery store and takeout business in the village that closed abruptly in February, will go to foreclosure auction next month.

The auction will include the entire property. The 7,200-square-foot building includes an apartment and office space and is on Davis Stream, which runs into Damariscotta Lake.

A preview will take place from 3-4 p.m., Wednesday, April 18, according to Stefan Keenan, an auctioneer and real estate division manager with Keenan Auction.

Keenan said the property is available for private showing with an appointment, and will also be open at 10 a.m., Thursday, May 3, an hour prior to the auction.

Keenan described the property as a rare opportunity.

“The market’s waterfront lends itself to access from Damariscotta Lake and it is close to a road with good traffic flow. It’s a rare opportunity for the amount of square footage,” Keenan said.

The Keenan Auction website describes the building as a two-story wood-frame building with 3,000 square feet of retail space on the first floor in addition to 600 square feet of office space with separate access and exposure to the street.

The top floor contains a 2,235-square foot apartment and 1,365 square feet of storage space, according to the site.

The property features a rear storage barn near the water with 15-plus parking spaces, with additional parking in the rear of the building for the apartment, according to the site.

Keenan described the foreclosure auction as a way for the bank to facilitate the sale of the asset, in this case a commercial property.

“The bank holds the mortgage, not the title, and has taken the position of managing the asset and preserving it until the time of the auction,” Keenan said.

Keenan said the auction will determine the new owner of the property, with the possibility that the bank could take ownership if it is the highest bidder.

“Our firm was hired to market the property, post signage, generate interest, and accelerate the real estate process,” Keenan said.

Keenan said the upcoming auction in Jefferson would be auction 7,787 for his firm.

The Jefferson Market closed abruptly Feb. 15, with a sign posted on the door indicating the store was closed for vacation and slated to reopen Sunday, April 15.

The property at 242 Waldoboro Road was previously listed online by Douglas Erickson, a real estate agent with The Masiello Group, for $497,500.