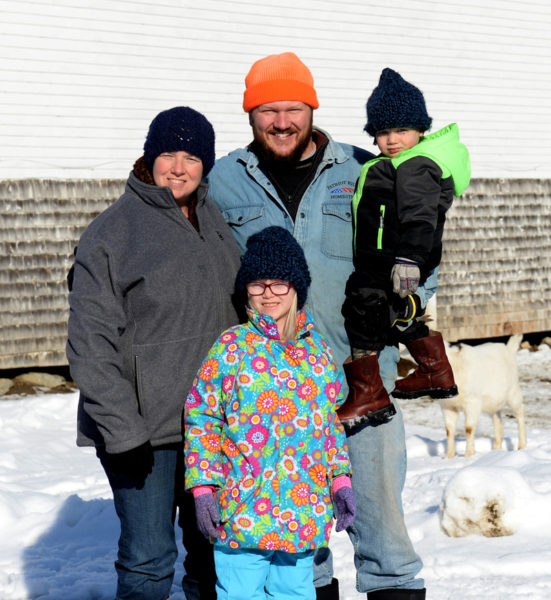 Aaron Greene-Morse and Walter Morse with their children, Paige, 7, and Joseph, 2. The owners of Patriot Ridge Homestead in Jefferson will be featured on the opening segment of “Growing Home” on local NBC stations at 11 a.m., Sunday, Jan. 8. “Growing Home” is a 13-week series about veterans in agriculture. (Paula Roberts photo)

U.S. Army veteran Walter G. Morse is the president of the organization. He and his wife, Aaron, also an Army veteran, co-own Patriot Ridge Homestead on Washington Road. They specialize in raising heritage sheep, like Cotswolds, and heritage pigs.

The couple got involved in UFV of Maine after first joining a different organization, the national Farmer Veteran Coalition.

“It was a great idea but unfortunately was managed out of California,” Walter Morse said of the coalition, which dealt mainly with large farms. “When you are dealing with agriculture in Maine and the unique characteristics of small farms, the program was not the best fit for us.”

“A group of us decided we would do our own veterans organization in Maine. We built it from the bottom up,” Walter Morse said. UFV of Maine was organized in early 2016.

Aaron Greene-Morse retired from the National Security Agency. When the couple announced that they were moving to Maine to start a small farm, “everyone thought we were crazy,” Walter Morse said. 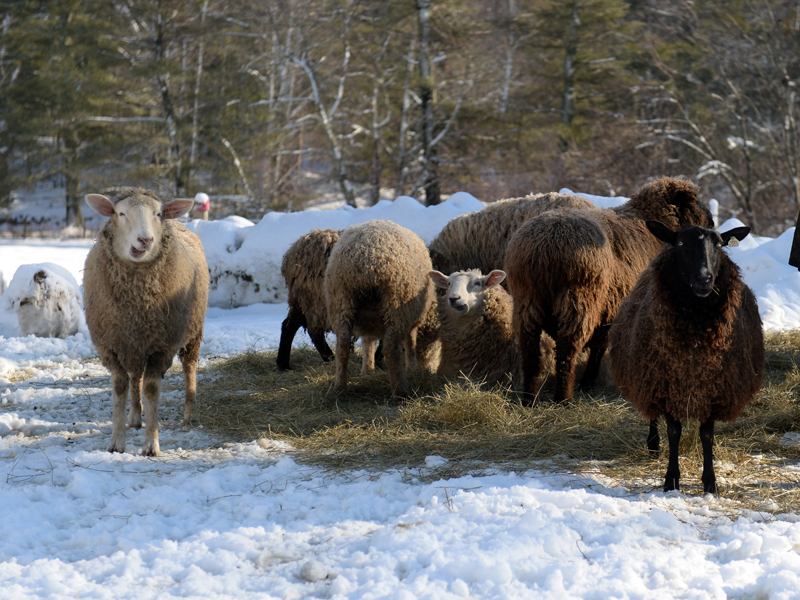 “When we got here we thought we were the lone veterans with the idea. Instead of being the lone wolf, we found out there are hundreds of us,” he said.

“We are here because it is an opportunity for veterans to help veterans out. By sharing resources and experiences, every farmer does not have to reinvent the wheel,” Morse said.

“In this program, no vet is left behind. Those that served in mid-’80s or ’90s or Vietnam are just as important today. It is an all-inclusive organization. We want to help those who want to be a part of Maine agriculture, whether on traditional dairy farms or growing oysters off the coast of Maine,” Morse added.

Former U.S. Navy Seabee Clayton Spinney II is the secretary and treasurer of the organization, and owns Keekionga Farm II on Valley Road, where he has a small farm stand. Spinney also owns Keekionga Farm II LLC, a transportation company that collects and distributes produce from farms owned or operated by veterans. “I bring fresh meats and produce from veterans’ farms to customers across Maine,” Spinney said.

“For me to try to sell my product in Portland or Boston is a difficult thing,” Ireland said. “It is cheaper for me to take my product collectively to Boston than to individually take them to Bangor. Logistics, marketing, and sales are expensive. If we can provide tools collectively, farmers can be profitable at the same time.”

“One part Clayton (Spinney) does is the statewide distribution for all veterans across the state,” Ireland said.

Ireland said UFV farms sell all kinds of meat, including venison, buffalo, and grass-fed beef; maple syrup; and “every kind of fruit and produce you can image.” 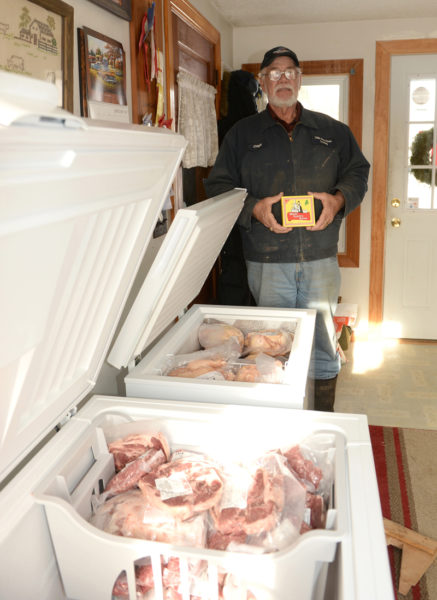 Clayton Spinney, of Keekionga Farm II, with two of his freezers full of organic and natural meats grown by veterans across the state, including himself. He also sells Araucana eggs (green-shelled), butter, and maple syrup “Homegrown by Hereos” as part of the United Farmer Veterans of Maine organization, at his farm stand at 233 Valley Road in Jefferson. (Paula Roberts photo)

The mission of UFV is “to promote collaboration that advocates, supports, and mentors Maine’s military veteran farmers in order to facilitate success in sustainable and secure agriculture throughout our communities of Maine,” Ireland said.

One of the founding priciples of UFV of Maine is to give veterans a hand up, not a handout.

“When a veteran comes home from Afghanistan or Iraq, they feel out of place, so to be on a farm or work on a farm, they can work at their own pace. It is a better way for them to re-enter society,” Spinney said.

All the produce and farm products “are raised by veterans and have been grown by heroes,” Spinney added.

UFV of Maine principles state that the organization believes “all veterans count, we need not leave a single Maine veteran behind. We believe peer-to-peer veteran support networks have the most long-term value for Maine veterans in agriculture.”

“UFV of Maine is working with veterans of any era, getting them to work in agriculture,” Ireland said.

UFV builds cottages on land owned by veterans to provide housing for veterans working on the farms.

“It is really getting them a place to start, helping them to develop the resources they need to get going on their own farm or working on another farm, whatever the case may be,” Ireland said.

The cottage project consists of volunteers builing 16-by-20-foot cottages for veterans on veteran-owned farms. “They could be homeless, without a job, or any number of scenarios. They have a place to live and have a job,” Ireland said.

UFV’s goal is to raise $1.5 million to build 300 cottages on veteran-owned land in Maine.

“We have 220 veteran-owned farms,” Ireland said. “Some of these veterans want to help, so enter the UFV mentorship program” to help their fellow veterans.

According to Ireland, the new relationship will enable UFV to build a training center to address the needs of its affiliated farms. The center will work with veterans and re-entering prisoners to help them gain job skills and find housing and employment.

UFV has set up an online farmers market, so access to available products is instantaneous. “Product can be delivered to your house or picked up in Bangor. It gives (veterans’) farms the same ability to reach the market as any other farm,” Ireland said.

The last Sunday in January, the  Columbia Street Project will hold its first community dinner with all the food for the meal raised on veterans’ farms. Ireland said UFV of Maine “hopes it grows into something we’ll do every Saturday. It is kind of like an old-style Grange dinner.”

The dinner is free, although donations will be graciously accepted. “Our goal is to bring back that community dinner, and bring it to downtown Bangor,” Ireland said.

For more information, go to ufvme.org.