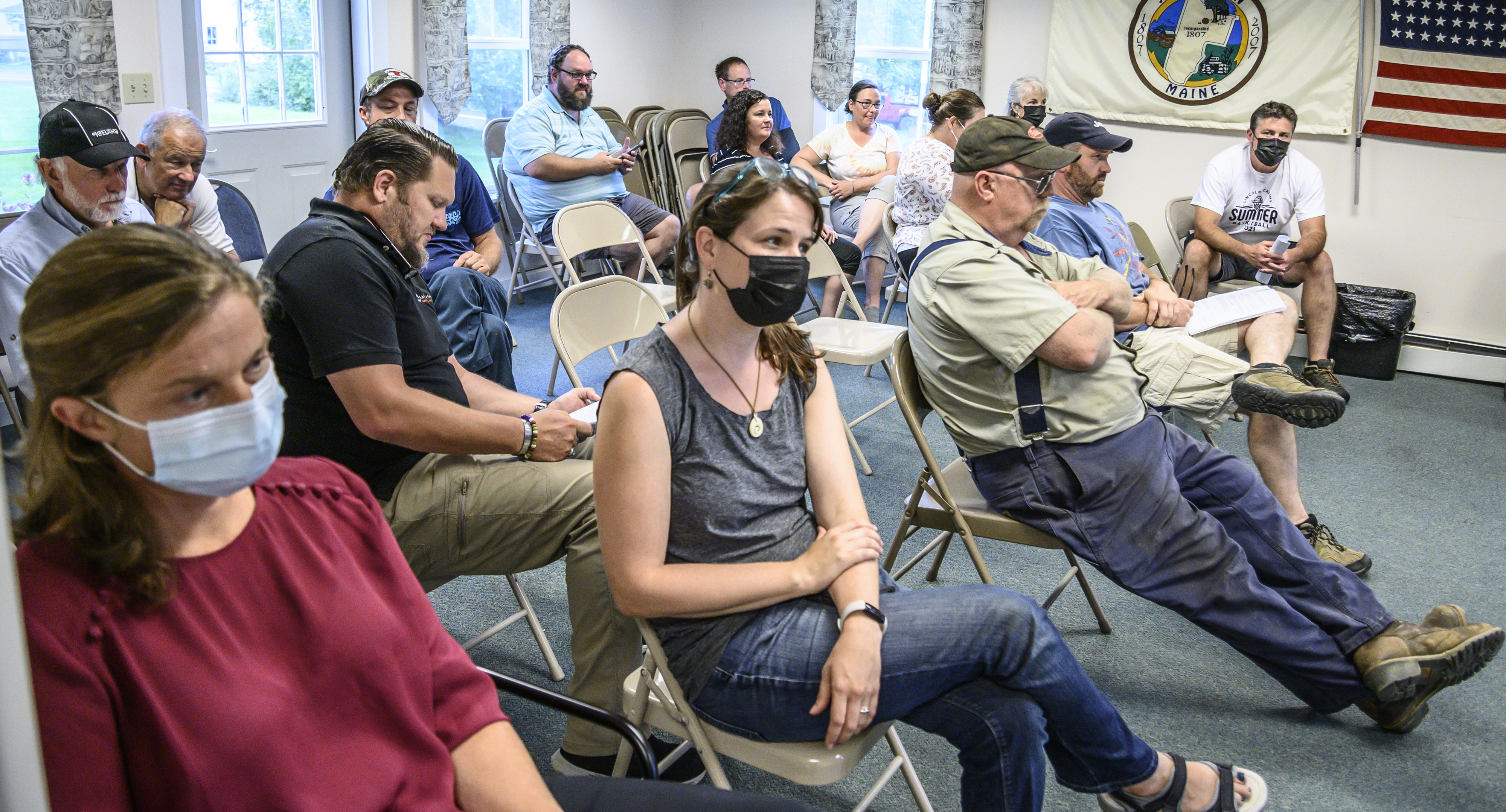 Concerned residents attend a selectmen’s meeting in Jefferson on Monday, August 23. People attended from both sides of the debate on masks to express their thoughts for or against mandating masks in town buildings and in the Jefferson Village School, where masks are currently not required. (Bisi Cameron Yee photo)

Concerned parents, Jefferson residents, members of the school board, and Jefferson’s state representative showed up at the Jefferson Board of Selectmen’s meeting on Monday, Aug. 23 to have their voices heard on both sides of the mask issue.

The Jefferson School Committee recently voted 5-0 to recommend but not require masks for the upcoming school year which starts Wednesday, Sept. 1. Jefferson Village School is the only one in AOS 93 to not implement a mask mandate.

Derek Chapman introduced himself as a Jefferson resident and parent. He thanked the board “for the opportunity to speak about a concerning matter” before reading a prepared statement.

“I understand completely that the selectmen have no authority at the Jefferson Village School, and that jurisdiction falls under the elected school board,” he said. “I fully understand how controversial this issue may be.”

Chapman said he was at the meeting to “respectfully ask selectmen to put forth a motion to vote to make masks required in all Jefferson buildings that have public access.”

Those spaces would include the town office and town’s public library, which is located within the Jefferson Village School.

Chapman said he would be asking the school committee to consider publicly apologizing for “what seemed to be the only reason stated to make masks optional – because they legally could not do so otherwise.”

Chapman said he sent an email about his concerns to all members of the school committee and got no response.

In a phone call to the Lincoln County News on Tuesday, Aug. 24, Greene-Morse said he checked with other members of the school committee and no one reported receiving the email. In addition, Greene-Morse said that Chapman misquoted him in the prepared statement. 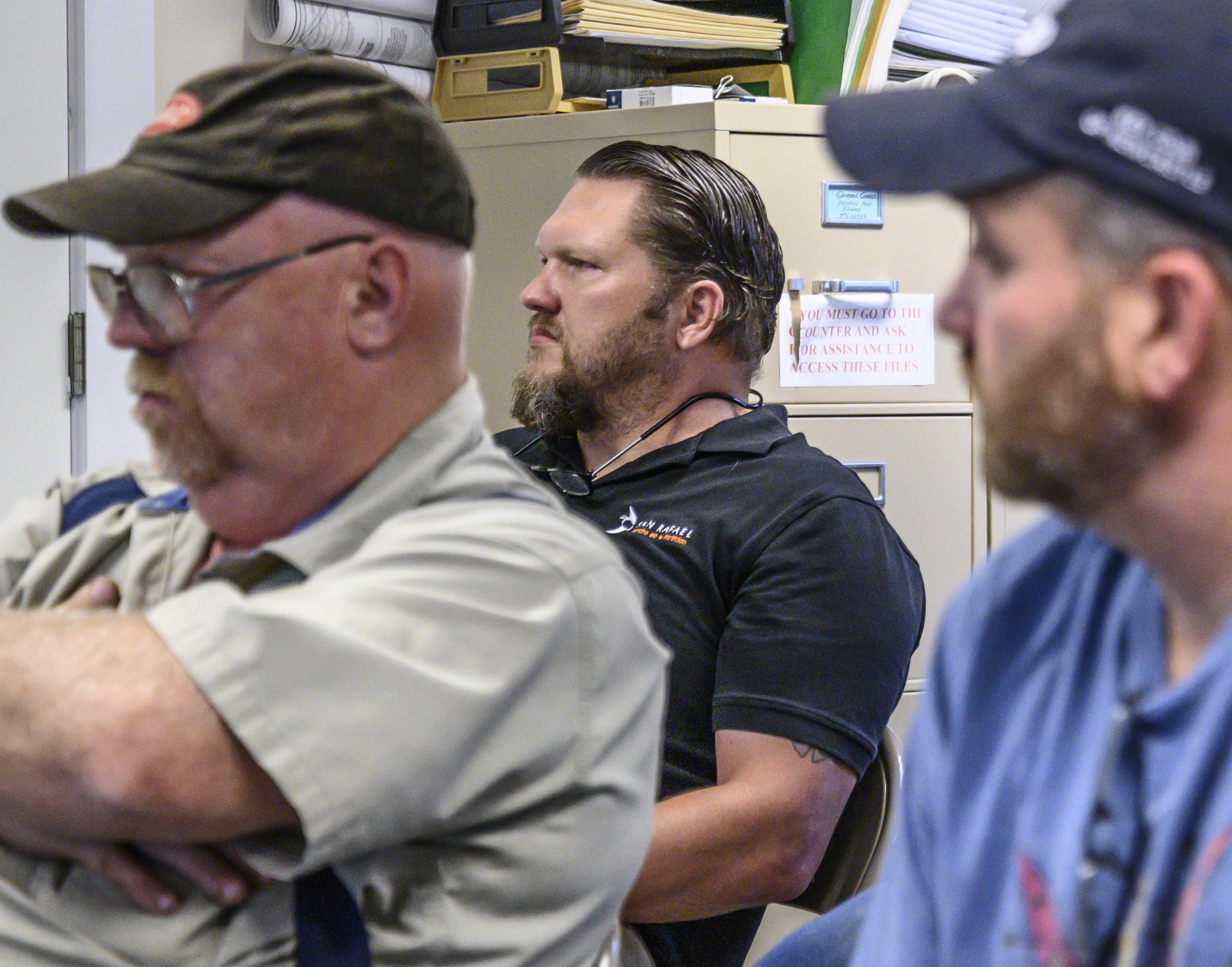 Chapman quoted Greene-Morse as saying, “We ultimately could not vote to mandate masks at school because Maine must be in a state of emergency to do so.”

In the recorded Aug. 17 school committee meeting Greene-Morse’s exact words were “Ultimately, I don’t know how we have the authority to require masking when the governor requires a state of emergency to do so.”

According to Chapman, the department of education, the school superintendent, and the school’s new principal all advised the enforcement of a mask mandate in school and that teachers, “who are on the frontline,” want masks to be mandatory.

Chapman asked if the school committee would consider expediting a revote on the question of the mask mandate “now that they know that they had misinformation.” 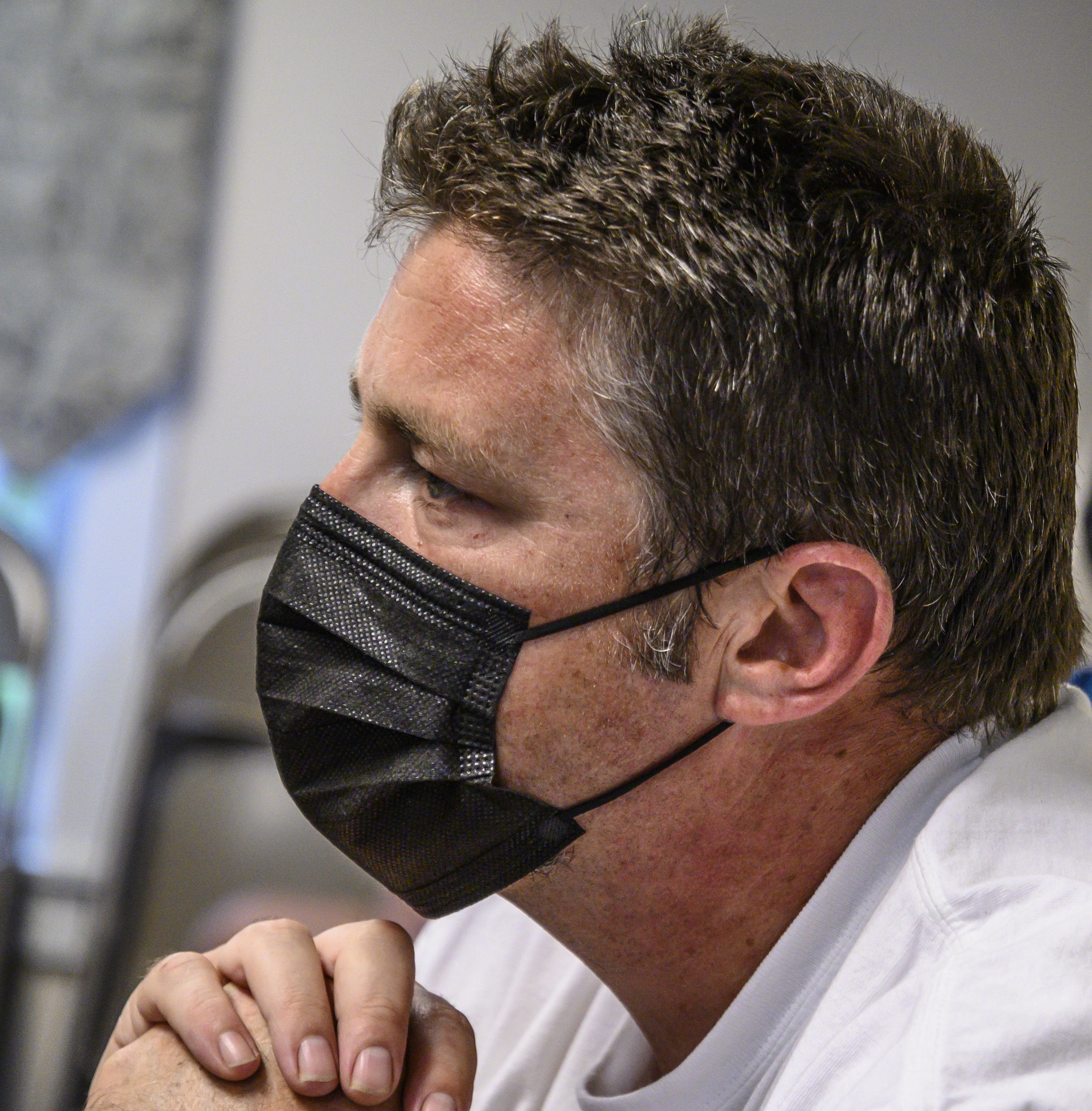 Derek Chapman listens to the response to his request for a limited mask mandate during the selectmen’s meeting in Jefferson on Monday, August 23. Chapman requested that masks be required for unvaccinated residents using the town office and the public library which is located inside the Jefferson Village School. (Bisi Cameron Yee photo)

Chapman addressed the board directly: “You as selectmen have the authority to require masks in all public access town buildings.”

Chapman asked that at a minimum masks be required for unvaccinated individuals.

“Let’s not put our whole community at risk … None of us wants to find out … that one of our elderly community members wound up in a casket because of a trip to our public library,” Chapman said.

Greg Johnston, chair of the board of selectmen said he did not know if the board legally has the right to enforce masks and he declined to make the motion Chapman requested without advice from the Maine Municipal Association.

Christina Zimmerman, a family practice physician, speaking as a resident of Jefferson and a parent said she will not send her children to JVS and her husband will not be available to the school as a substitute teacher due to the lack of a mask mandate.

Zimmerman shared a few “indisputable facts,” including that 123 Mainers are currently hospitalized with COVID-19, 61 of those are in the ICU and 25 are on ventilators. Zimmerman said that the average age of COVID patients is decreasing and that 40% of people contracting the virus are under the age of 50.

“Putting aside personal and political differences,” she added, “We all can agree that we want our community back in school full time. We want (our children) to play sports. We want them to participate in clubs, and be kids.”

Larry Damato, a 50-year resident of Jefferson, read information on the topic of mask wearing that he gathered from the internet. He said there was enough question regarding the effectiveness of masks “that I think you want to be real careful when you consider the facts.”

Damato cited the World Health Organization as saying that “wide use of masks by healthy people in a community setting is not supported by current evidence,” and said “any government official mandating masks is acting in complete defiance of scientific facts.”

“We’ve heard both sides of the story,” he said and added that the board had allotted 15 minutes and addressed the issue for 25 minutes.

State Rep. Michael Lemelin, R-Chelsea, who was in the audience, addressed the board regarding the disparity in allotted time between the two sides of the issue.

“When the fellow over here (Chapman) started talking, he talked quite a while. We only had a few minutes.” 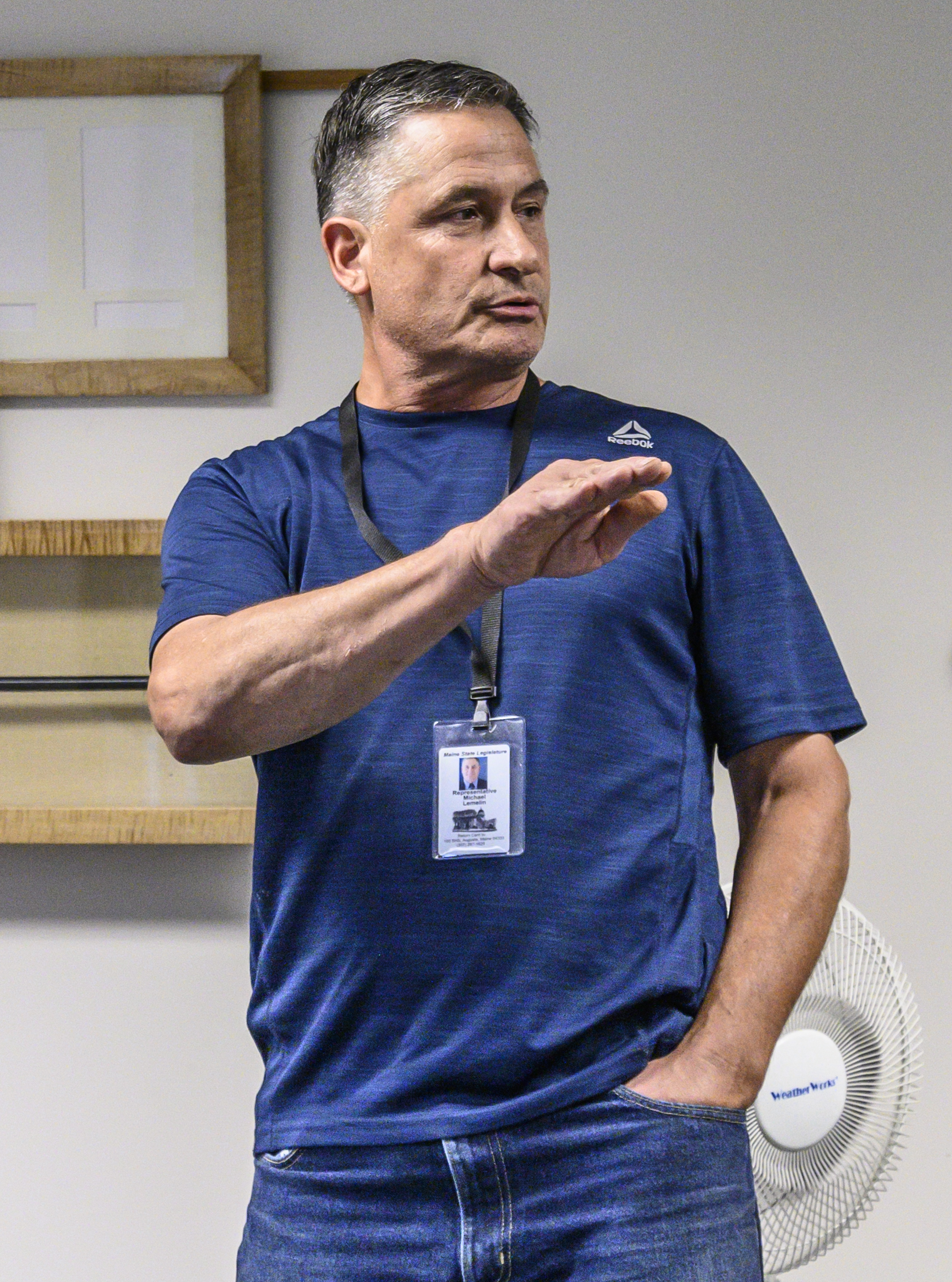 State Rep. Michael Lemelin, R-Chelsea, gestures while making a point that residents of Jefferson were not being given an opportunity to adequately express their concerns about mask mandates during a selectmen’s meeting in Jefferson on Monday, August 23. Greg Johnston, chair of the board of selectmen, said that the allotted time for the discussion had been used and suggested that Lemelin request to be placed on the agenda for the next meeting. (Bisi Cameron Yee photo)

Clark informed Lemelin that Chapman requested time on the agenda in advance. “He contacted me about the public library and I gave him 15 minutes. That’s all I knew it was about.”

Johnston said the public will be invited back before a decision is made.

“On a critical issue like this, why are you limiting the time to speak?” Lemelin asked. “I raised my hand and you wouldn’t let me talk. And I’m the state representative. It sounds to me like you’re just shutting everybody down and you don’t care about the truth and the real information because you’re not listening to it.”

Johnston responded that the board would obtain information on the topic from reputable sources including the Center for Disease Control and Prevention. He suggested to Lemelin that he could request time on the agenda for the next meeting.

“Really? What are you going to give me? About a minute to speak?” Lemelin responded.

“You didn’t think there was going to be a big turnout for this?” asked Lemelin. “When the school board votes unanimously to have the kids go to school with no masks and then you’re going to have this? You think this is not going to be big?”

“You didn’t let the people represent themselves here. And I’m here as a representative to make sure the people get their voice,” Lemelin said.

“They will,” Johnston responded.

“They weren’t on the agenda,” Clark said.

“I just talk loud, I don’t yell,” responded Lemelin, before requesting time on the next agenda.

“No,” said Johnston. “What you’re doing right now, sir, is wrong. You know that, too. Please leave, sir. Thank you.”

Jefferson Board of Selectmen’s next meeting will be held at 6 p.m. Tuesday, Sept. 7.