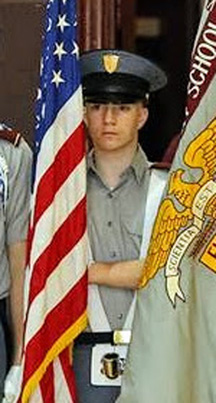 A 15-year-old from Jefferson will march in the presidential inauguration parade with his Virginia school on Friday, Jan. 20.

Quinn DeLorenzo, 15, a former student at the Damariscotta Montessori School in Nobleboro who now attends Fishburne Military School in Waynesboro, Va., will march with his fellow cadets through the streets of Washington, D.C. as part of the ceremonies marking the transition of power between the outgoing and incoming presidential administrations.

DeLorenzo started attending the military school in August 2016. He is a private and a member of the school’s band company.

He said the school’s A, B, and C companies will join his company during the inaugural parade. “We are marching as a single unit down the parade route,” he said.

He said the school’s older students, including those with the rank of first sergeant, will be in charge as the group winds its way through the streets of the nation’s capital.

DeLorenzo believes the ceremonies will provide his school with a chance to gain visibility and attract future students.

“I’m excited to be in the parade. It will be a great opportunity for Fishburne to get publicity,” DeLorenzo said.

He said the unit recently marched in Waynesboro’s Christmas Parade and has participated in other parades in the area.

DeLorenzo plays the trumpet in the band company, but he said the unit will march without its instruments on Inauguration Day.

He said he picked up the trumpet when he started attending the military school. He has also played the guitar.

DeLorenzo said he plans to attend Fishburne for four years. The school serves students from grade seven through 12.

DeLorenzo said a major appeal of the school in the Shenandoah Valley was its small class sizes, a feature of the school he attended in Lincoln County.

“With the small classes, I felt the transition to a new school would be a lot less difficult,” DeLorenzo said.

The parade will include roughly 8,000 participants, including a number of military bands, with representatives from each branch of the armed forces.

DeLorenzo said he has been to Washington, D.C. a few times, twice with the Damariscotta Montessori School and twice with his family. He said his favorite monument is the Lincoln Memorial.

DeLorenzo is the son of Chip and Sondra DeLorenzo. Chip DeLorenzo works as the head of school at Damariscotta Montessori School.

According to Chip DeLorenzo, the family will not attend the inauguration, but will be watching the event on television.

The parade will proceed down 15 blocks of Pennsylvania Avenue, starting at the Capitol and ending near the White House.

The parade is scheduled to start around 2:30 p.m. The inauguration will be broadcast on a number of broadcast and cable news networks.