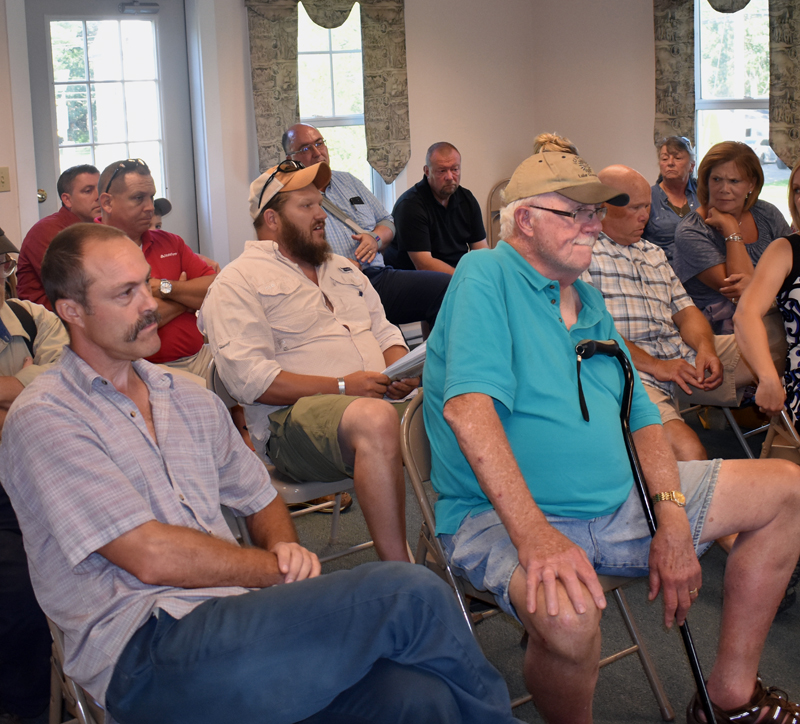 Members of the Jefferson School Committee attend a meeting of the Jefferson Board of Selectmen on Monday, Aug. 12. From left: Wayne Parlin, Walter Greene-Morse, and Al Vorhis. (Alexander Violo photo)

The Maine Department of Education has denied a family’s appeal of the Jefferson School Committee’s decision not to allow their child to attend Jefferson Village School. Meanwhile, a Jefferson selectman plans to consult the Maine Municipal Association on the matter.

Kara and Ron Rollins – who have a house in Whitefield with a driveway, outbuilding, and street address in Jefferson – met with the Jefferson Board of Selectmen on Monday, Aug. 12, a week after the school committee declined to either recognize them as Jefferson residents or allow their child to attend JVS through a superintendents’ agreement.

A superintendents’ agreement allows a student to attend a school outside the district where he or she lives. Whitefield is in RSU 12, Jefferson in AOS 93.

With friends and neighbors in attendance, Kara and Ron Rollins produced documentation of their Jefferson residency in the form of their driver’s licenses and IRS forms, and reminded the selectmen that they pay taxes on land and an outbuilding in Jefferson.

After the discussion, Selectman Pamela Grotton said she would follow up on the residency issue with MMA the next day to see how the town should proceed.

The family had already appealed the matter to the Department of Education.

According to Jefferson School Committee member Walter Greene-Morse, the department denied the appeal and informed the school committee in writing.

Grotton said the couple pays property taxes to the town of Whitefield and has a homestead exemption through the neighboring municipality.

Selectman Jigger Clark said the selectmen had discussed the matter several months ago.

Clark asked the family if they have to drive through Jefferson to reach their home.

Kara Rollins said they do. “We have no road frontage in Whitefield,” she said.

The family lives on Atkins Road, which becomes Hilton Road at the town line with Whitefield.

Michael Murphy, a Jefferson resident who works at the Lincoln County Sheriff’s Office with Rollins, asked the selectmen what defines a residence. He believes it is a matter of interpretation.

Murphy compared the situation to dual citizenship, where an individual holds citizenship in two countries at the same time.

“As a Jefferson resident, I think it would be good to allow them to attend the school. They pay taxes and live at the residence,” Murphy said.

“Every year it is a process and a fight to register our vehicles because we don’t live on a Whitefield road,” she said.

Responding to public comment on the town’s position, Grotton said the municipality doesn’t get to pick and choose what rules apply to it.

“We have ordinances, rules, and regulations we have to go by. There are MMA laws and policies we have to follow as selectmen,” Grotton said.

“The residence is located in Whitefield. It is over the town line. That is undisputed,” Parlin said.

“They don’t like the school and bus transportation in Whitefield, but you have to be a resident of Jefferson to attend school here,” Parlin said.

Ron Rollins said there are two pieces of property between the family’s home and Stearns Brook Lane.

Grotton asked the family where they register to vote.

According to Kara Rollins, the couple has not yet done so.

“We tried to register to vote here, but were told no,” she said.

Barnikow said this decision is up to the town’s registrar of voters.

Clark asked about the bus issue, saying he thought towns were required to offer door-to-door transportation.

Ron Rollins said the Whitefield bus accesses Atkins Road via Hilton Road, a gravel road, which is slippery in the winter and muddy in the spring.

“Their physical legal residence is in Whitefield. They are not residents of Jefferson. I would love them to be residents, but they knew they weren’t and that is why they filed for a superintendents’ agreement and we are nowhere near to meeting those requirements,” Greene-Morse said.

Greene-Morse said the student could attend JVS on a tuition basis, but he does not believe the family or the town of Whitefield is willing to pay the tuition.

Greene-Morse said the school ran into a similar issue with a student near the Jefferson-Washington town line a few years ago.

“We want to make this work and the way we make it work is Whitefield pays tuition. Whitefield has one less student and they pay Jefferson tuition,” Greene-Morse said.

“What we’re trying to do is protect Jefferson resources, so a Jefferson student gets everything they deserve,” Greene-Morse said.

The policy gives the school committee authority to verify the residency and guardianship of students.

This policy served as the basis for the decision not to admit the student near the town line, according to Greene-Morse, who said the policy is clear.