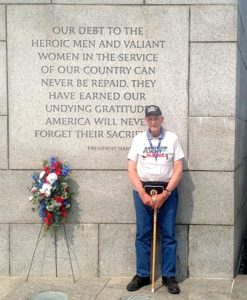 A local World War II-era veteran was recently able to travel to Washington, D.C. thanks to the efforts of a national organization that flies veterans to the capital to see the memorials honoring their service. Ralph Bond, 92, a U.S. Air Force veteran who lives in Jefferson, left Portland International Jetport on June 10 and spent the next couple of days in and around the nation’s capital thanks to Honor Flight Maine. Bond’s daughter, Julie Stegna, of Walpole, accompanied her father on the trip.

Honor Flight Maine, a nonprofit, gives top priority to WWII-era veterans and terminally ill veterans of all conflicts. According to Stegna, about 100 people saw the group of 26 Maine veterans off in Portland and several hundred people greeted the veterans when they arrived at BaltimoreWashington International Airport in Maryland. Bond said many of the people at the airport were eager to shake hands with the veterans. In addition to the Honor Flight group from Maine, there were veterans on Honor Flight trips from a number of other states and the territory of Puerto Rico.

After touching down, Bond and other veterans visited Fort George G. Meade, an Army installation named for the victorious general who commanded Union troops at Gettysburg during the Civil War. 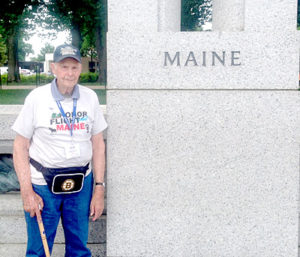 The following day, June 11, the veterans were given a motorcycle escort into Washington D.C., where they proceeded to visit the World War II Memorial, the U.S. Air Force Memorial, and Arlington National Cemetery, where they saw the changing of the guard at the Tomb of the Unknown Soldier.

On the third and final day of the journey, the group visited Fort McHenry in Baltimore, the site of the naval bombardment in the War of 1812 that inspired Francis Scott Key to pen the lyrics to “The Star-Spangled Banner.”

Throughout his time around D.C., Bond recalled shaking hands with a large number of excited kids, in addition to meeting prominent politicians like U.S. Sen. Susan Collins, R-Maine, and former U.S. Sen. Bob Dole, R-Kansas, who was the Republican nominee for president in 1996.

Stegna said a woman and her adolescent son from the Netherlands thanked the veterans for saving their country during the second World War.

Honor Flight trips are entirely paid for by donations, with the veterans themselves paying nothing. All donations to Honor Flight go toward the flights.

Each veteran is accompanied by a family member or volunteer who donates $500 to cover expenses, such as plane fare, in addition to room and board for the two-night stay.

Stegna said that, as was the case for many veterans, her father did not get a welcome home after his service, and the Honor Flight was an emotional experience and the first time he had encountered crowds cheering and people thanking him for his service to the nation.

Bond served in the U.S. Army Air Force during World War II, from 1943-1945. He was stationed in several southern states, completed pilot training, and became a co-pilot on a B-24 heavy bomber.

Bond, who worked at the Damariscotta Shipyard in 1942, said he joined the military because “everybody was doing it.”

In the process of earning his wings, he was part of an experimental class of high school graduates who completed pilot training, graduating with the Class of 44k.

Bond said the year signified the year they graduated and the k was for the month, November.

“There were only seven of us in the class,” Bond said.

Bond said going to the south after growing up in Maine was a bit of a culture shock, as the summers were warm and many towns had a railroad running right down Main Street.

Stegna said the trip was a great experience and she hopes other veterans, especially those who are senior citizens, take advantage of the opportunity presented by Honor Flight.

“We never would have gone if it had not been for Honor Flight. They gave us a great opportunity,” Stegna said.

For more information about Honor Flight or for an application, go to honorflightmaine.org.