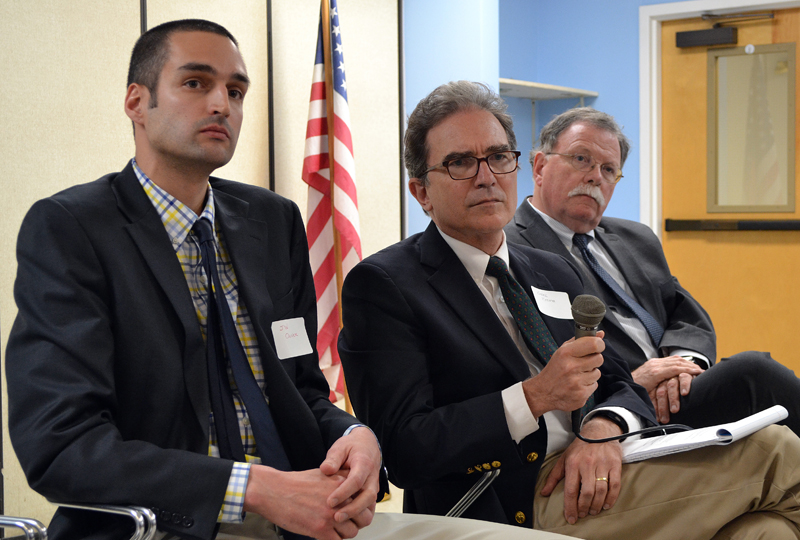 From left: J.W. Oliver, editor of The Lincoln County News; Greg Kesich, editorial page editor for the Portland Press Herald; and Don Carrigan, of WCSH 6, participate in a community conversation about fake news at Mobius Inc. headquarters in Damariscotta on Wednesday, May 24. (Maia Zewert photo)

Three print and broadcast journalists discussed “fake news” – what it means, how to identify it, and how their organizations deal with it – during a community conservation in front of more than 50 people at Mobius Inc. in Damariscotta on Wednesday, May 24.

The panel consisted of Don Carrigan, a reporter at WCSH 6; Greg Kesich, editorial page editor at the Portland Press Herald; and J.W. Oliver, editor of The Lincoln County News. The panelists answered questions from moderator Chris Johnson, chair of the Lincoln County Democratic Committee, and the audience during the two-hour forum. The committee sponsored the event, the second in its series of community conversations.

Carrigan, Kesich, and Oliver fielded questions about the recent spike in attention to “fake news,” which Kesich defined as false articles published with the intent to mislead readers.

Recently, however, people have begun using the phrase to refer to any news stories they do not like.

“Now, if you say something someone disagrees with, it’s automatically ‘fake news,’” Kesich said.

President Donald J. Trump frequently uses the term to criticize the media. In a series of tweets Sunday, May 28, Trump said stories based on leaks coming out of the White House were “fabricated lies” from the “fake news media.”

“Whenever you see the words ‘sources say’ in the fake news media, and they don’t mention names … it is very possible that those sources don’t exist but are made up by fake news writers. #FakeNews is the enemy!” Trump tweeted.

While fake news does not have the same impact on local newspapers like The Lincoln County News as it has on the national level, the loss of trust in traditional media sources has trickled down to the local level, Oliver said.

The audience at a community conversation about fake news at Mobius Inc. headquarters in Damariscotta. (Maia Zewert photo)

“It’s really just been another reminder to be vigilant, fair, and objective in our work,” Oliver said.

From Oliver’s perspective, the impact of fake news and the willingness of some to accept it as real could stem from a loss of trust in the industry as a whole. According to a Gallup poll in September 2016, only 32 percent of Americans trust the mass media to report the news fully, accurately, and fairly.

“I think we in the media do have some responsibility for that, and we need to restore public trust,” Oliver said.

Kesich spoke about some of the trends he’s noticed in fake news. The first is the purposeful spread of disinformation through shares on fake Facebook accounts. A story can appear to “go viral” in this manner and gain more attention.

The effort can be quite effective, Kesich said. He cited a December 2016 column in The Washington Post written by Anne Applebaum, who was the focus of an online smear campaign from “Russia-based websites” for her coverage of Ukraine.

One of the other driving factors in the fake news world is profit, Kesich said. He gave an example of a fake news story created by a Maryland man before the 2016 election.

Cameron Harris published an article on his fake news site, The Christian Times, claiming that an electrical worker discovered thousands of ballots marked for Democratic candidate Hillary Clinton prior to the election. Harris made more than $20,000 from advertisements on his website, and was offered more than $100,000 for the website, Kesich said.

Part of the reason Harris was so successful was that his story appeared to confirm what many voters already believed, Kesich said.

“People are finding that they can make a buck off of people’s beliefs and have tremendous results,” Kesich said. “That’s the environment that enables these kinds of intentional disinformation campaigns, and we need to be very cautious of that.” 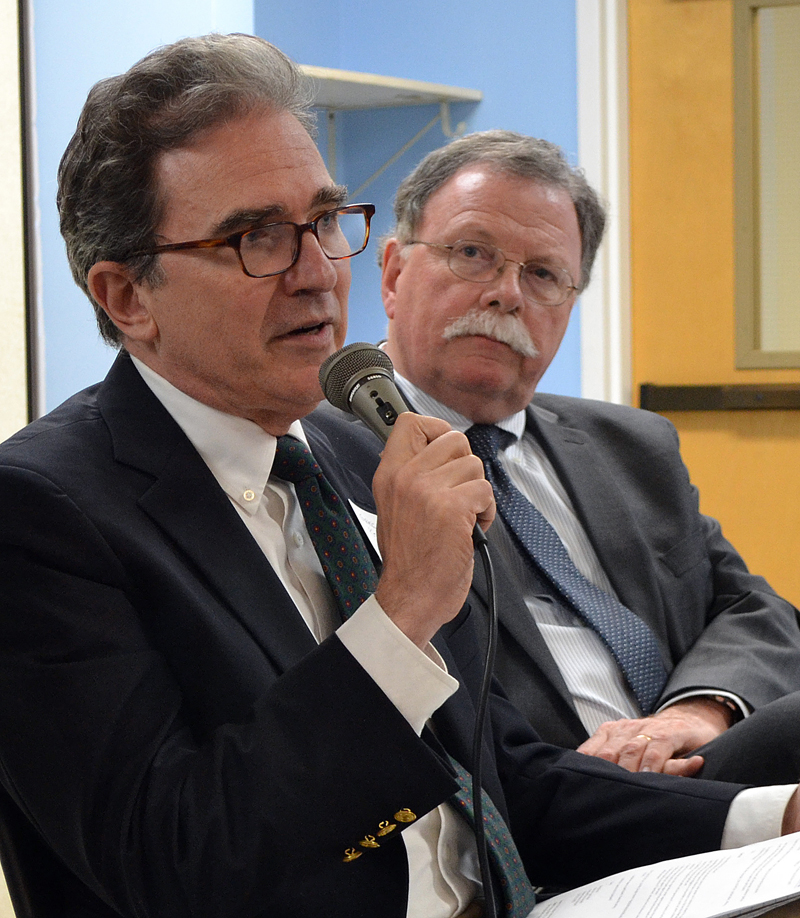 Carrigan agreed with Kesich, saying he believes people tend to accept information that “fits with their pre-existing conditions.”

Audience members asked how to determine whether a news story is fake or real.  Each of the panelists spoke about the importance of considering their familiarity with the website or publication and whether an article cites credible sources.

“Personally, I’ve come to be suspicious of all of it unless I see a source name I’m more familiar with,” Carrigan said.

The panelists also responded to a question about the credibility of anonymous sources. While The Lincoln County News does not use anonymous sources, the issue might be a little more complex at the national level, Oliver said.

“I do think you have to read those articles with some skepticism, but you also have to remember that Richard Nixon was brought down by a well-placed anonymous source,” Oliver said.

As the two-hour panel came to a close, a person in the audience asked how they could support the press and its obligation to report the truth.

“Subscribe to a newspaper,” Kesich said. “Our business model is collapsing, the structure that enabled us to perform this public service has evaporated, and that is really going to change the ability of the news organizations to do our job.”

“It’s always been a  challenge to know what’s true and correct, and sometimes we do get it wrong, but the only thing we have to make you want to continue to use our business is the credibility of our information,” Carrigan said.