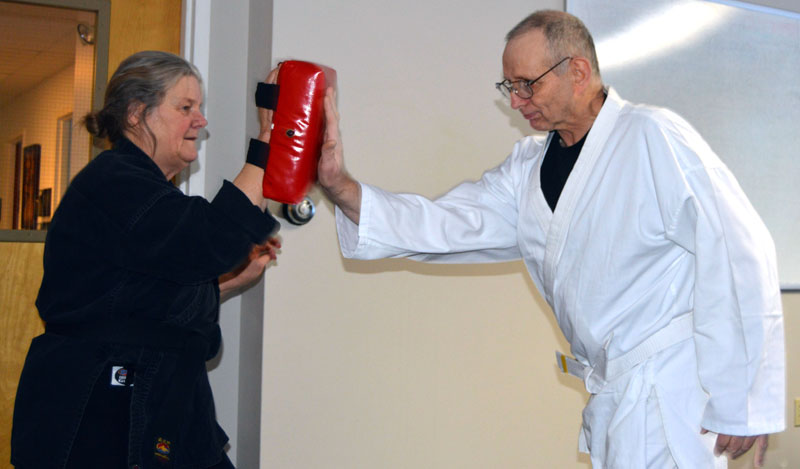 Linda Porter approaches Glenn James with a foam karate blocker around her arm. She wants James to attack her using a move she taught him in one of her karate classes.

James, who uses a wheelchair, is a little hesitant. After some urging, he says Porter’s favorite words: “I can try.”

“Those are the best stories in martial arts,” Porter said. “’I can try.’”

James is a member of the karate class Porter offers at the Mobius Inc. community center on Main Street in Damariscotta. He and the three others in the class – Nate Allen, Ricky Cook, and Danny Kelley – were at Mobius for practice Thursday, Dec. 21, a week after their first promotion ceremony.

The practice began with a meditation session. Porter hit her singing bowl with a wooden striker, producing a long note, and instructed the members of the class to sit and clear their minds. 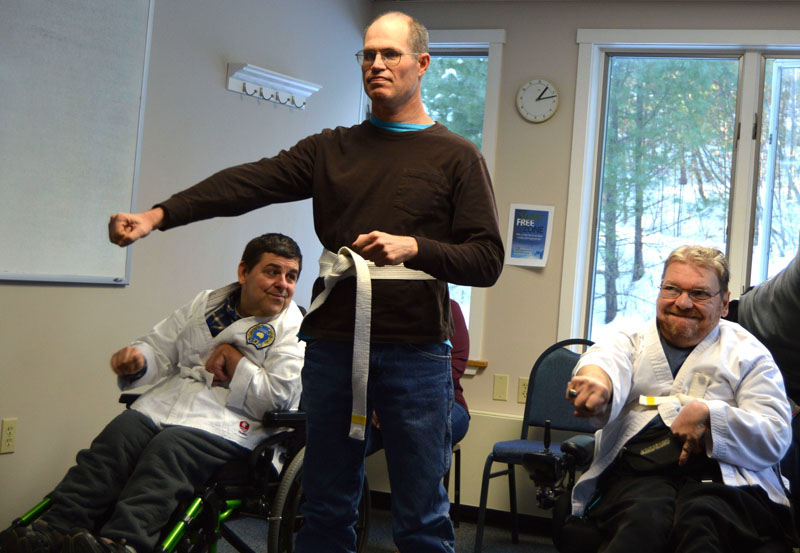 She then read from a book of quotes by Bruce Lee, the late martial artist and actor, picking one at random: “We are always in the process of becoming and nothing is fixed. Have no rigid system in you and you’ll be flexible to change with the ever-changing. Open yourself and flow at once with the total flowing now.”

The practice continued with alternating sessions of learning karate moves and relaxing techniques.

At one point, Cook, who also uses a wheelchair, was watching Allen practice kicking moves with Porter. When the two of them were done, he called Porter over and asked if he could attempt the move. Porter obliged, and went over to him with the foam blocker.

He inched up from the seat a little, wound up his right leg, and let loose, kicking the blocker multiple times to much fanfare.

At the celebration Dec. 14, each of the four received a yellow stripe to put on their white belts, signifying the martial arts knowledge they have gained since beginning the practices in September. The ceremony was attended by family, friends, case workers, and colleagues.

The practices began after Porter’s supervisor at Mobius, Director of Integrated Services Michaela York, approached her with the idea to teach karate classes to clients. Porter, who has long worked with people with disabilities and practiced martial arts separately, loved the idea of combining the two. 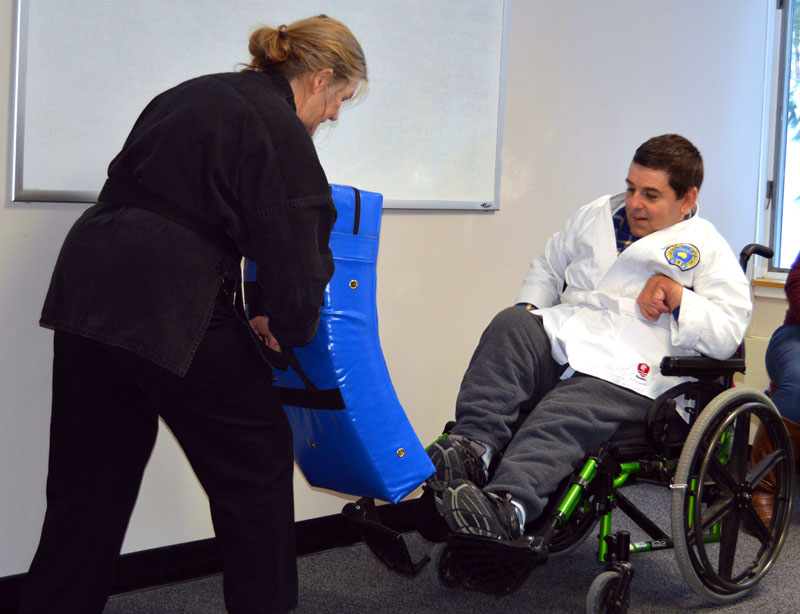 A shared living program manager at Mobius, Porter said she has seen a change in her students since they began: they’re more confident.

“They were really nervous when they first started,” she said, and often felt like they couldn’t do what they were asked to do. “We’ve all done that,” she said. “I’ve quit in my mind so many times.”

Where before they might have been tentative to try new moves, they now attempt them with excitement. And now, they’re comfortable messing around at practice when they are switching gears.

“There’s a lot of laughter and joking around,” Porter said. “But that’s them. It can’t be all serious … their sense of humor just gets me. I love to goof around.”

Mobius, a nonprofit, provides services to people with disabilities. The organization hosts activities, job training, and other programs at its headquarters in Damariscotta and operates 14 other locations, such as apartments and group homes where some of its clients live.